Hoatzin Reptile Bird: A Dinosaur-Like Bird with the Digestive System of a Cow 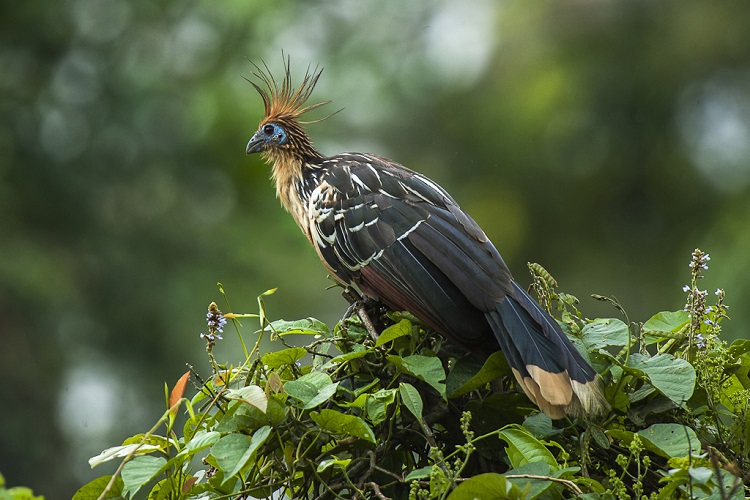 The Hoatzin Reptile Bird or Opisthocomus hoazin is a species of tropical bird that is found exclusively in the mangrove forests and swamps of the Amazon and Orinoco basins in South America. This species is generally found in riparian zones – which are large areas that form the interface between rivers and land.

The reptile bird is the only living member of the genus Opisthocomus. Interestingly, this genus is the only living genus of the family Opisthocomidae. Taxonomists and naturalists have been debating the status of this particular family for decades and thus its classification is still unclear. Colloquial names for the Hoatzin include reptile bird, stinkbird, skunk bird and Canje Pheasant.

The Hoatzin Reptile Bird is roughly the same size as a common pheasant. On average, it is 65 cm long and has a long neck. Like all pheasants, the Hoatzin too has a small head. The bird has a large crest on top of its head which is reddish-brown in colour. This crest is one of its most striking features. Also, the Greek word Opisthocomus means “wearing long hair behind”, which is a clear reference to the bird’s stunning crest. The Hoatzin also has a featherless face and scarlet eyes. It has a long brown tail which is tipped with ochre brown. The underparts of the bird are the same sooty brown colour. The mantle, nape and the wing coverts of the reptile bird are all streaked with the same ochre brown or buff colour.

The Hoatzin Reptile Bird is a herbivorous bird and prefers to eat leaves, flowers and fruits. Thus, scientists have classified it as a folivore. Since the Hoatzin lives in a riparian and swampy habitat, it has an ample bounty of food. The bird is known to clamber between branches in search of its food.

The Hoatzin has a very unusual digestive system as it has an enlarged ‘crop’, which is an expanded thin-walled section of the bird’s alimentary canal. The function of this crop is the storage and fermentation of vegetable matter that is ingested by the bird. The digestive system of the Hoatzin Reptile Bird is similar to the one present in ruminant mammals such as cows and goats. The bird has a leathery bump on the bottom of its crop which helps in balancing. Initially, it was assumed that the Hoatzin could eat only arum and mangrove leaves. But gradual observation has shown that these birds also consume the leaves of more than fifty species of Amazonian vegetation. According to a Venezuelan study, the Hoatzin’s diet consists of 82% leaves, 10% flowers and 8% fruits.

The fermentation of vegetable matter in the bird’s body gives the bird its characteristic foul odour. This is the reason behind its colloquial names “Stinkbird” and “Skunk Bird”. This bird is also very noisy and makes a variety of raucous sounds to communicate and mark territory. Hoarse calls, croaks, groans, hisses, and grunts are used by this species to communicate, along with body movements such as spreading of the wings.

Discovery of the Hoatzin

The Hoatzin Reptile Bird was first discovered and described by the German zoologist Phillip Statius Muller in 1776. Professor Muller was a famed naturalist, ornithologist and entomologist who described a large number of undiscovered tropical species. The distinctive nature of the hoatzin has been the cause of many debates regarding its taxonomy, and scientists are divided in opinion regarding its relationship with other avian species.

Its uniqueness has caused scientists to assign the bird its very own family and genus. A genome sequencing study that was published in 2012 placed the Hoatzin as the sister taxon of a clade that also includes cranes (Gruiformes) and plovers (Charadriiformes). Comprehensive genetic research that was conducted in 2015 established that the Hoatzin is the last extant species of a line of avian species that branched off around 64 million years ago. This is the same time-period when the non-avian dinosaurs were killed off in a major extinction event.

The Hoatzin bird breeds seasonally and generally does so during the monsoon season. As the rainy season occurs at different times in the different parts of South America, they tend to breed according to the season in the region it is residing in. These birds are very sociable and nest in small colonies. The females lay two or three eggs in nests that are placed on trees hanging over the water. Hoatzin chicks are unique because they are born with two claws on each wing. Immediately after birth, the chicks can use these claws to walk around on the branches without falling into the water. The chicks are fed regurgitated fermented vegetable matter by their parents. 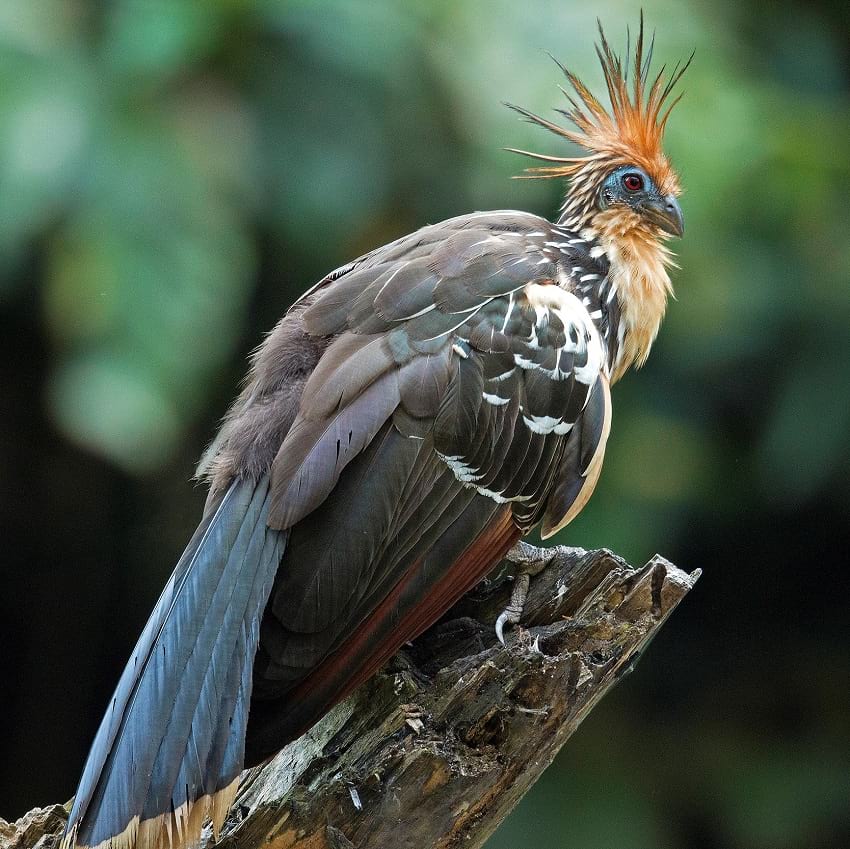 The Hoatzin birds are visually striking and beautiful because of their rich and vivid plumage. Additionally, it is unwary and cannot fly very well. The Hoatzin birds, however, are not hunted for game because of their objectionable odour. Their meat is also said to have a very bad taste. As a result, it is a relatively thriving species as it is usually left alone by humans. At present, the biggest threat to the Hoatzin birds is the loss of habitat caused by the deforestation of the Amazonian rainforest. If the swamps and marshes of South America continue to disappear, the bird could be in a lot more danger.

The Amazonian Basin boasts of some of the richest biodiversity available on the entire planet. The Hoatzin is one of the most interesting endemic species that can be found in these tropical rainforests of South America. The Hoatzin Reptile Bird is also of great taxonomic significance as its taxonomy has been argued and debated by naturalists for many years.

Recommended Read:
Handbook of the Birds of the World – Volume 16

Previous Article
Infinite Monkey Theorem: Can Monkeys Type Up the Entire Works of Shakespeare?
Next Article
The Manhattan Project: The Making of the First Atomic Bomb