Franz Reichelt: Dressmaker Who Jumped off the Eiffel Tower Experimenting with Self-Designed Parachute-Suit Franz Reichelt was an Austrian born tailor who owned a successful dressmaking business in the middle of Paris. He was born in Austria in 1879 and moved to France in 1899, eventually obtained French citizenship in 1909. At some point, he got obsessed with the idea of human flight, particularly with the idea of a wearable parachute for pilots.

He started experimenting with several designs of parachute-suit around 1910. The available parachutes at that time were parachutes with a fixed canopy meaning they were designed on rigid frames to stay open even before the jump. Thus, he took it upon himself to develop a suit that pilots could wear that would double as a parachute.

It was supposed to help them get out of crashes uninjured as no such lifeline was available for aeronauts at that time. Reichelt had a few successful trials with dummies that he threw from the 5th floor of his apartment building. Some of these dummies didn’t fall but touched the ground lightly. The task of converting the prototype from these trials into a working and wearable parachute turned out to be a herculean task for him.

The initial design weighed a massive 70 kilograms and was made from 6 square meters of material. He was firm he was on the right path, and he once presented his design to La Ligue Aérienne at the Aéro-Club de France. Unconvinced with the viability of the design of his parachute (citing the weakness of the canopy and the massive size) the club rejected even any possible testings of the suit. The club even tried discouraging Reichelt from spending any more time on his design. Undeterred by the rejection, he kept tinkering with his design and did not give up. A series of unsuccessful experiments employing dummies followed. He was eventually able to reduce the weight of the suit even after doubling the surface area of the material bringing it down to around 25 kilograms.

He is said to have jumped wearing the suit himself from heights of about 8 to 10 meters. One of those trials even led to a fractured leg. After many unsuccessful attempts, Reichelt still refused to see any fault in the design. He was convinced that if the experiments were conducted from higher elevations they definitely would have been successful.

On the day of the jump viz. February 4, 1912, Franz Reichelt arrived at the Eiffel Tower already dressed in his suit strutting about for cameras of the press. The press wrote about the suit that it was “… only a little more voluminous than ordinary clothing …” (“… un peu plus volumineuse qu’un vêtement ordinaire …”) The extended parachute was described as “a sort of cloak fitted with a vast hood of silk” (“une sorte de manteau, muni d’un très vaste capuchon de soie”). He himself had invited the press to demonstrate his experiment. Little did he know he was giving them an even more compelling story to write.

Before climbing on to the Eiffel Tower, the tailor went around inspecting the arrangements at the site of his experiment, in order to avoid any mishaps. Without anyone’s knowledge, he prepared to make the jump himself. When he stepped on the ledge, friends who accompanied him tried convincing him to first throw a dummy to see if the suit actually works. He wouldn’t hear it. The people representing the city authorities were confused because they were not expecting Reichelt to make the jump himself. Everybody was anxious about this going badly. Even the weather seemed to be giving a warning as the winds started to pick up the pace that cold morning. 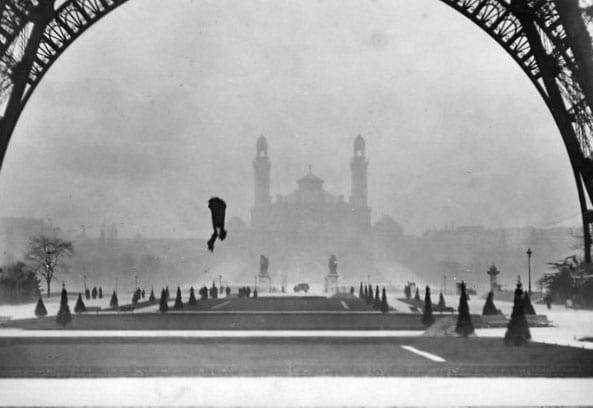 Franz Reichelt finally stepped off the ledge and just kept plummeting through the air crashing into the frozen ground within a matter of seconds. The parachute never opened. The newsreel from that day showed people looking in horror and shock as the lifeless tailor is carried out of there. The police can be seen measuring the dent he had made on the ground for investigative purposes. The aftermath of the fatal jump. Police recover the damaged parachute. (Wikimedia Commons)

Had he lived in our day and age where information travels faster than light, he would have known his death was in vain. Just two days prior to Reichelt’s jump, an American parachute enthusiast, by the name Fredrick R. Law, had made a successful jump from the Statue of Liberty with a wearable parachute.

Enjoyed this article? Also, check out “Thomas Midgley Jr. – The Scientist Who Almost Destroyed the Planet without Knowing“. 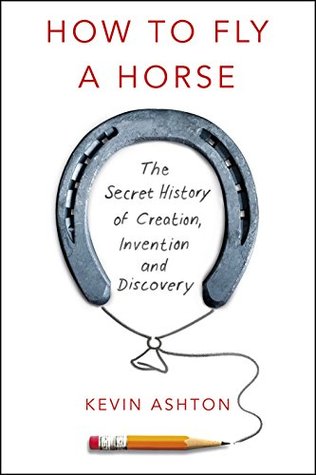 Recommended Read:
How to Fly a Horse: The Secret History of Creation, Invention, and Discovery | By Kevin Ashton

Previous Article
Supervoid: A Giant Empty Region of ‘Nothingness’ in the Midst of Our Universe
Next Article
Infinite Monkey Theorem: Can Monkeys Type Up the Entire Works of Shakespeare?