Infinite Monkey Theorem: Can Monkeys Type Up the Entire Works of Shakespeare? 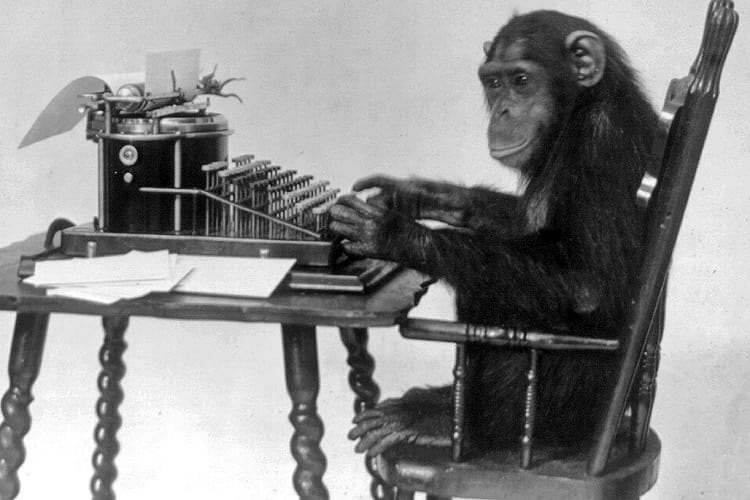 A chimpanzee sitting in front of a typewriter. (New York Zoological Society)

Imagine a group of monkeys typing away diligently on typewriters. They are typing random letters. If they continue typing random letters in this manner for an infinite amount of time, they may, at some point, end up typing Shakespeare’s complete works or any other literary texts or so the Infinite Monkey Theorem claims.

What is the Infinite Monkey Theorem?

The Infinite Monkey Theorem is an example of testing the limits of probability.

Generally, in probability, there may be several possible outcomes for an event. It is only by chance that we get the outcome we do.

When you consider a probability theory, you must deal with two types of events. The first event type does not adhere to the rules of the probability theory and is therefore entirely impossible in its context. The second event type follows the rules of the probability theory and is therefore possible. However, in this group, there are some events that occur frequently and some that occur so infrequently that they are almost unlikely to take place. However, even if rare, you cannot rule out their occurrence. They might not happen in a human lifespan, but they could possibly happen in a timespan of a billion and more years.

One well-known example of this is the Infinite Monkey Theorem. Given endless time and typewriters, the monkeys could potentially type up a storm of letter combinations. Here, we must assume that the monkeys will type every single letter of the alphabet and that there will be an even distribution of the typed letters. There would be a higher likelihood then that these letters could potentially form meaningful word sequences.

It might not happen in the first 1000 typed letters, but it could happen after a billion typed letters. And these word sequences could potentially form sentences. The sentences, in turn, could form paragraphs. And, in this way, we could, potentially, have the monkeys type out the entire works of Shakespeare.

The probability of that happening may be so minuscule as to be impossible, but we can’t rule it out.

Implications of the Infinite Monkey Theorem

Considered upfront, the Infinite Monkey Theorem might sound ridiculous, and, of course, nobody is going to be around for infinity to ever verify it. However, it does have some interesting philosophical implications that can alter our scientific outlook.

When we carry out scientific experiments or observations, we rely on the practical results to draw certain conclusions about the matter. But how reliable exactly are these results? Going by the Infinite Monkey Theorem, they are not 100 percent reliable. There are limits that the experiment results cannot overcome. For instance, even if you carry out hundreds of thousands of experiments and don’t get a certain result, it doesn’t mean that the result is completely out of the question. It could possibly occur, given an infinite amount of time. So, basically, you cannot confirm theories with a 100 percent certainty.

Another thing with the Infinite Monkey Theorem is that people often assume that if you have an infinite amount of time to resolve an issue, you will probably be able to do so. That is also not necessarily true. We need to reconsider the assumption that if something continues for infinity, it will eventually produce a result. Even if the event follows all the rules of the probability theory, it doesn’t automatically follow that there will be a tangible result.

While the monkeys in the Infinite Monkey Theorem are just allegorical, Researchers at Plymouth University in England decided to carry out the experiment with actual monkeys. They placed a computer in an enclosure of six Sulawesi crested macaques in the Paignton Zoo in southwest England and waited to see what kind of literature the monkeys would produce. At the start, the monkeys weren’t interested in doing any writing. One male monkey tried to smash the computer with stones. The others defecated and urinated over it. Finally, they poked at the keyboard and were amazed when letters appeared on the screen. They found that so fascinating, it motivated them to get writing.

The monkeys, however, didn’t type random letters. They appeared to type some letters more often than the others, notably the letter S. They also showed a preference for the letters A, J, L, and M. Since there was no chance of the monkeys typing away for an infinite amount of time here, the experiment remained inconclusive. In the given amount of time, however, the monkeys did not write anything from Shakespeare or any other book.

Jesse Anderson, a US American programmer, tested the Infinite Monkey Theorem in 2011 with a software program he wrote to generate random characters. Whenever the characters formed a sentence sequence that matched a sentence from Shakespeare, the program marked it. In this way, it took nearly two months for the program to mark the entire works of Shakespeare.

The mathematician Emile Borel introduced the Infinite Monkey Theorem in his article Mécanique Statistique et Irréversibilité, published in the Journal of Physics in 1913. Later, the astronomer Arthur Eddington popularized it. The theory was mentioned in Russel Maloney’s science fiction short story Inflexible Logic and also in Douglas Adams’s Hitchhiker’s Guide to the Galaxy.

An interesting thing about the Infinite Monkey Theorem is that it restricts itself to an unspecified number of monkeys typing away for an infinite amount of time. According to the theory, this incessant typing alone is enough to create literary works. Which basically means that given enough time and brute force, it is possible to get almost anything done. There is no mention of the intelligence and creativity that, in real life, are necessary factors for creating literary works and other intellectual works of a high order.

Enjoyed this article? Also, check out “Graham’s Number: A Finite Number that Cannot Be Contemplated“.

Previous Article
Franz Reichelt: Dressmaker Who Jumped off the Eiffel Tower Experimenting with Self-Designed Parachute-Suit
Next Article
Hoatzin Reptile Bird: A Dinosaur-Like Bird with the Digestive System of a Cow