Supervoid: A Giant Empty Region of ‘Nothingness’ in the Midst of Our Universe 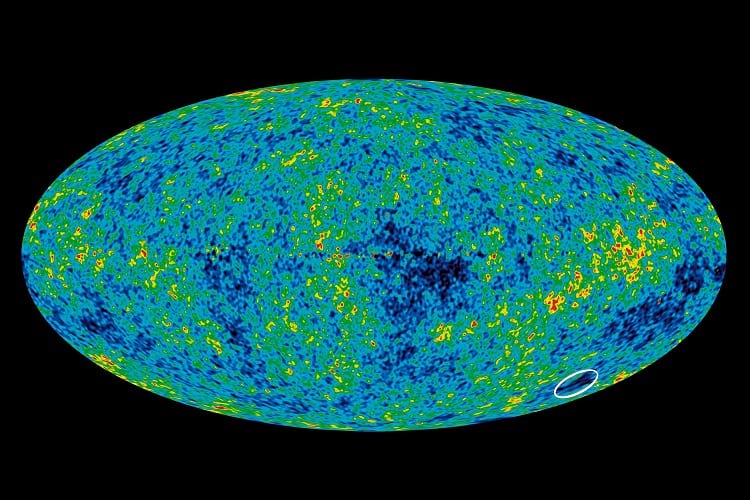 The circled area is the cold spot, suggesting the presence of a supervoid. (NASA)

The Supervoid is quite literally a giant comic hole in the Universe. It is a region that shrinks everything in and around it, but it lacks the standard features of a conventional black hole. A black hole is a region of space that is created by the curving of the continuum that joins space and time. This phenomenon is typically caused by some gigantic mass. The giant hole, on the other hand, is devoid of all kinds of matter.

This hole is a giant void, devoid of stars, gas and other usual matter, including the darkness that envelopes the space all around us. “Not only has no one ever found a void this big, but we never even expected to find one this size,” says researcher Lawrence Rudnick of the University of Minnesota.

The hole is nearly 1.8 billion light years across. It is not uncommon to discover voids such as this in our vast Universe- the size of this particular hole, however, is unprecedented. “Supervoids are not entirely empty, they’re under-dense,” stated András Kovács, who is a co-author at the Eötvös Loránd University in Budapest. A very important and characteristic feature of this void is its temperature. As astronomer Carlos Frenk says, “It’s like the Everest of voids.”

Cosmic Microwave Background or CMB can track radiation back to the birth of our Universe. This supervoid can be spotted on the maps of CMB as discovered by NASA’s Wilkinson Microwave Anisotropy Probe (WMAP) in 2004. This observation was later confirmed by ESA’s Planck Satellite. Recently, the Institute for Astronomy at The University of Hawaii has found evidence stating that the density of galaxies in the supervoid is actually much lower than that in the rest of the Universe.

The universe: A perforated ball of cheese

Professor Carlos Frenk, a cosmologist at the University of Durham, acknowledges that the discovery of the “Cold Spot”, as it was dubbed, had raised quite a few eyebrows. The main reason for this- the theories around it all posed a direct challenge to orthodoxy, negating some suppositions made by The Big Bang Theory. However, it was inevitable to go down the rabbit hole and research extensively to find the cause of the ‘cold spots’ and ‘supervoids’.

The Universe is, in fact, dispersed with holes and voids that are nothing but empty spaces, devoid of matter and gravitational pull. Consequently, when a particle of light (a photon) enters this void, it loses its energy but quickly regains some of it on exiting this hole. It is a known fact that the Universe is constantly expanding and changing. It is automatically presupposed that the exiting photon emerges into a medium that is less dense than what it was in when initially entering the void. Hence, the gravitational pull on the photon is a lot less than it was previously.

The photon converts its kinetic energy into a potential gravitational pull as it travels into the centre of the void. In a stationary Universe, the photon is ideally supposed to remain unchanged. But since the Universe is constantly stretching, the photon can no longer regain its original energy or the energy possessed by the other light particles in the Universe. This results in an overall drop in temperature. That is how the “cold spot” within the supervoids come to be. The exiting light from the void has a longer wavelength corresponding to the drop in temperature.

Two sets of data were used and compared to make this discovery. The scientists tested the objects that were found at infrared wavelengths by NASA’s Wide Field Survey Explorer (WISE). These were compared against the colours in visible light measured with the help of the robotic telescope Pan-STARRS1. They made a tomographic map of the galaxies that are present within the cold spot. The sudden drop in the number of galaxies led to the discovery of a region in the Universe that existed when the Universe was 11.1 billion years old.

Supervoid: A hole in the universe

Investigations around the phenomenon of supervoids, particularly this gigantic hole, are ongoing leading to new observations and new questions by the day. The biggest and most important of these issues that have come up is undoubted whether this Supervoid is a rare occurrence, or if there are more such voids out there. The discovery of other similar supervoids will help answer one of the biggest mysteries here- the relationship of the cold spots to the voids. As Dr Roberto Trotta, a cosmologist at Imperial College London said, “Now we have to figure out how does the void itself form. It’s still a rare event.” When scientists from the University of Minnesota discovered this massive hole in the Universe, they termed it as a “supervoid” with regards to the enormous size of it. This was then published in 2007 in The Astrophysical Journal.

Therefore, the Supervoid is simply an area with a lesser matter in comparison to the rest of the Universe. It is an accidental discovery as one might say, with due credits to NASA. There were investigating the spread of radiation as a result of the Big Bang due to the absence of about ten thousand galaxies when they stumbled upon this. Other voids in the Universe have thence made their appearance but none of them amounts to anywhere close to the size of the Supervoid.

Enjoyed this article? Also, check out “Gliese 581g: A Habitable Exoplanet or Just Another Celestial Object Orbiting a Star?“ 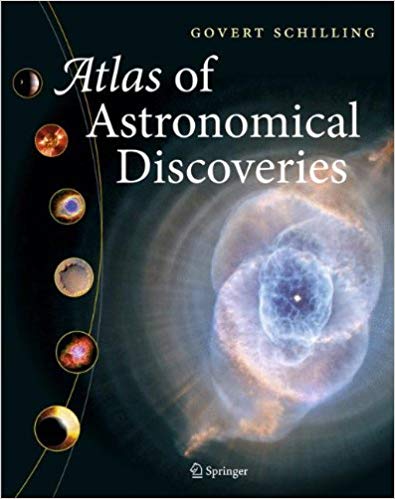 Previous Article
Dinner in the Sky: The Thrill of Partying in a Crane Lift
Next Article
Franz Reichelt: Dressmaker Who Jumped off the Eiffel Tower Experimenting with Self-Designed Parachute-Suit