The Five Punishments for Chinese Slaves 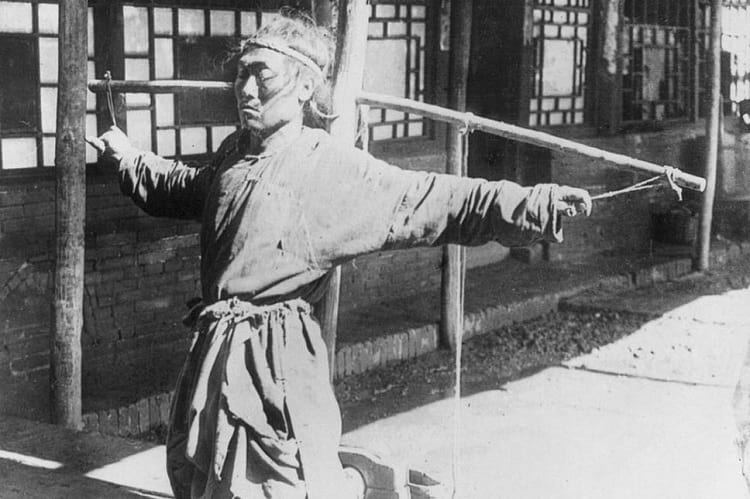 Five Punishments: A Chinese man with hands tied and forced to kneel in public. Circa 1900. (Hawley C. White / Library of Congress)

The journey of mankind has been filled with joy, discovery and wonder. Unfortunately, it has done so alongside pain, evil and shame. To begin the Chinese theme, this connection of opposing sides is symbolic to the famous Chinese philosophy of Yin and Yang, illustrating that conflicting factors are complementary, even dependant on one another. Perhaps the same can be said for crime and punishment, that they are a necessary entity of everyday life.

In much of the world today, forms of torture are frowned upon and even for criminals, alternative forms are encouraged in most countries. It is an attitude that feels right; to save a population from desensitising and returning to a barbaric system of justice. It also inhibits the famous eye for an eye principle which uses a take from me and I take from you legal philosophy.

Anything from money, land or ultimately, an eye. This idiom was first mentioned in the Book of Hammurabi from ancient Mesopotamia – a functioning civilisation which harboured torturous punishments also. Much of the world has changed so much since that time making it hard to imagine that torture was once a mainstay. Commonly practised and an accepted form of punishment in every corner of the world, even within governments. One such place was and is the great land of China.

Punishments for slaves in Old China

This is best proved by the fact that the death sentence is still passed in China today, illustrating that corporal punishment is not designated to the past, and perhaps has a place in the future. There are also the numerous reports that torture techniques are still in practice, for example in secret prisons. China is one of the cradles of civilisation, as one of the oldest continuous cultures in the world.

The first written history comes from a period known as Dynastic China when the Xia Dynasty ruled from 2070 BCE. It is in the centuries before this period when a series of horrifying penalties known as The Five Punishments were written to keep slaves under control and maintain social order. Slavery was a massive cog in the Chinese economic system during this time.

People were born, sold or captured into slavery and their main duties – within a tough life – would be farming. Some slaves would also work with the dynastic families themselves. Around the centuries before the inception of the Xia, these punishments were created although their exact origins are unknown. They seem to have originated from an indigenous people known as the Hmong (Miao) however, a group from the south of China.

The reason for this is that a famed warrior known as Chiyou is heavily involved. His specific clan was unknown but many link it to the Hmong or their allies. For instance, the Sanmiao or the Nine Li. He is regarded as a mythical king and a great warrior. The Xia dynasty adopted these punishments and made them known to their people. They were for men only as women had their own separate punishments which will be listed later.

In 221 BCE, a ruler called Qin Shi Huang brought about a time known as the Imperial Era. He conquered the dynastic states and made himself Emperor of the collective land known as Qin, later to be called China. During this imperial era his reforms made the punishments less barbaric but none the less still torturous. The improvement of standards is attributed to the teachings of famous philosopher Confucius and his views on human life. The Imperial penalties were as follows, A lawbreaker being whipped while two men restraint him. (Ralph Repo / Flickr)

It must be said that slaves could also pay their way out of these brutal punishments but the prices were extortionate meaning that very few could do so.

For females the punishments were different. There are no concrete reasons why at this point it is simply thought that because China was a patriarchal society in which woman were not held responsible for their crimes. And that they could not suffer as much as male serfs. As follows,

As mentioned, although torture was inherently part of life in all corners of the world, in Chinese culture it seems incredibly more brutal, especially to be so intertwined with government and society, somewhat uniquely. Perhaps the extreme scale of the land and the amount of warring factions gave a higher rise for the need to control. China is such a different world – as are many – for outsiders to comprehend.

There are many works which try to associate the mindset, for example to why their laws arose and why many still continue. Skipping over the nature which brought about torture in the first place (as that would require a tome to even attempt to fathom why) we will look instead at the change from Dynastic to Imperial. When punishments looked to improve after people started becoming enlightened.

This possibly began when the teacher and philosopher Confucius resided and taught.  Born in 551 BC his teachings spread more after his life ended and influenced many of his countrymen. The work Crime and Punishment in Ancient China and its Relevance Today explains more,

“Confucianism was designed to maintain civility in the absence of central authority by persuading leaders to create a harmonious society based on the limited use of raw power and punishment.”

Helping Confucianism was the cosmological tradition which was established after his death, around 330 BC during the Warring States Era. This was where many dynasties vied with each other to create an Empire. Like the five punishments, this tradition is based on the five major planets and the elements they represent: Venus (metal), Jupiter (wood), Mercury (water), Mars (fire) and Saturn (Earth). The people used this to monitor agriculture, climate, politics and warfare. In 170 BC a document was found relating these five entities to each other. It is called the Five Star Oracle.  Confucianism, as well as the cosmological tradition helped people in this aspect by introducing more moralistic behaviour and by trying to attain a balance among nature. Punishments were not just required for social order but to balance complex natural phenomena.  Deborah Cao explains more,

“The cosmologists believed that without an appropriate effort to remedy the social harm caused by a crime, the disturbance of the human order would affect the larger cosmic order of things. Through negative natural phenomena, such as… floods, disturbances of the cosmos would in terms have a negative impact on the human world.”

Although this period certainly lessened torture techniques, the death penalty continued was implemented and advocated by Shang Yang (390 BCE). He founded Chinese Legalism which promoted a strict system. Crime and Punishment in Ancient China and its Relevance Today again explains more.

“The Legalist tradition restored harsh punishment as a way to impose order upon a fragmented society in which local despots had been carrying out arbitrary judgments. But Legalism carried the seeds of its own destruction and required Confucianism to balance it in creating a durable system of governance and justice.”

It looks as though each system – Confucianism and Legalism – worked alongside each other, again like an interconnected Yin and Yang. This was perhaps one of the first documented times that legality and severe punishment went hand-in-hand with socialism. With it, more thought was put into social problems.

Punishment of course continued in other forms. Here is an example of a torture used even until the 20th century, a technique called a Cangue board used in many parts of Asia. It was implemented in other parts of the world also such as England where it was known as a Pillory. The Pillory device, however, would be fixed to the ground while the Cangue could be moved by the recipient if needed. It obviously restricted movements even to the point where people could not feed themselves, resulting in starvation in many cases unless they had friends and family to help them, otherwise strangers. The prisoner would be in the Cangue for as long as the punishment merited, it was mostly the sentence for thieves. 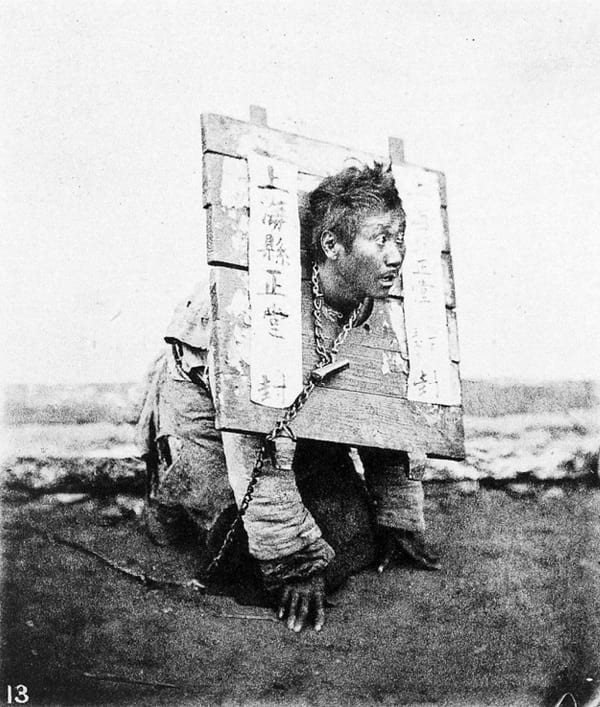 A man being punished by cangue. (John Thomson / Wellcome Images)

These methods continued until China became a Republic in 1912. Then it became westernised and more socialism brought about changes in punishment techniques, making them less brutal. Although as shown with the death penalty, the older traditions remain in China, whereas in other countries the death penalty has been outlawed completely. China, according to Amnesty International accounts for the majority of capital punishments on Earth.

Like many countries, China developed a culture of punishment and torture. However, unlink many countries such as in Western Europe they have kept aspects of it such as the death penalty. There are also many reports regarding punishments similar to the Five going on in secret prisons known as ‘Black Prisons’. The famous bamboo shoot and water torture are a few of the methods practiced.

European installations like the Council of Europe make banning capital punishment a mainstay if a country wishes to join. This is to do with the miscarriage of justice which can occur. More is explained in a deep study by the Economist. It is not just a sentimental gesture, however. Another reason is for keeping political contests fair, as many reports of killing political opponents this way have been reported none more so in China.

“For many emerging democracies, abolishing the death penalty has also been a way to make a decisive break with an authoritarian past, when governments used capital punishment not just to punish criminals but to get rid of political opponents, as China currently seems to be doing in Xinjiang against the province’s Muslims.”

This will long be a contentious element between nations on whether the death penalty is just. For the reasons above it seems a valid argument to abolish it yet oppositely, for serial killers and crowded prisons it becomes more apt. But just where can the line be drawn or known between the two. 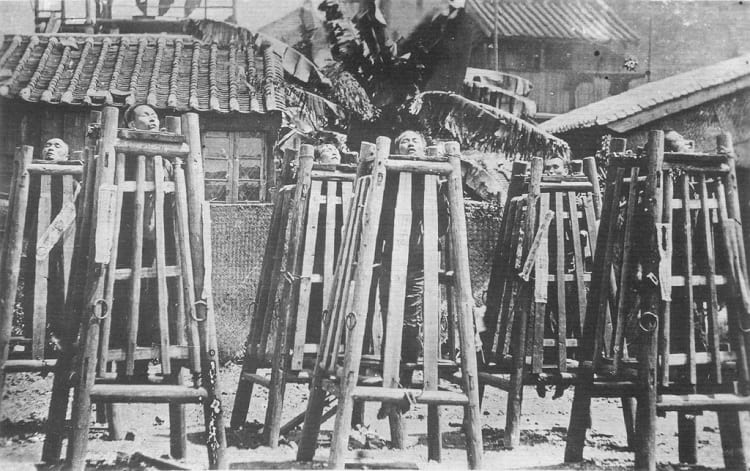 A clearer point can be with torture. It seems simpler in that there is now a consensus flowing through the world that any form of torture is wrong, whatever the crime. It still goes on, that goes without saying but soon hopefully it will be completely resigned to the past. Even reading about these torture techniques is absolutely harrowing, to think of what some people went through, some no doubt innocent. May they rest in peace and be eternally remembered so that the practice of torture is ceased, once and for all.

Enjoyed this article? Also, check out “The Head Crusher – A Renaissance Torture Device for Slow and Incrementally Agonising Punishment“.

Previous Article
Photos: Underground Town of Australia, Coober Pedy
Next Article
Nauru: An 8 Square Mile Island That was Once the World’s Richest Country