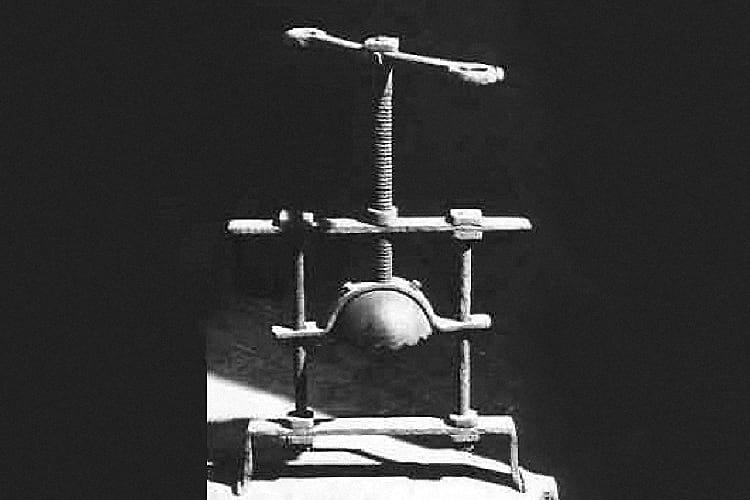 Medieval period or the Middle Age lasted from 5th century AD to 15th century AD. During this period mankind had a protracted transition from orthodoxy to logical thinking. However, a deterrent punishment carried out in full public view, remained a thumb rule for maintaining law and order during this time. Of all sentences, like exile, confiscation of property, fines, death by hanging, beheading, exposure to elements and mutilation, Head Crusher was most horrendous and spine-chilling. Objective, as for any other form of torture was: to force convict into the desired confession, derive sadistic pleasure from the process, send out a message to people what breaking the law can lead to an agonising death for a condemned person.

Head Crusher: The simplicity of device defied sinister task it was put to

Head crusher was a mechanical device where culprit’s head could be fixed immovably and subjected to calibrated pressure through a metallic cap. Chin resting on the bottom, the head was put under a helmet like dome attached to a screwed iron bar above. Rotating screw bar pushed the helmet down on the skull which got pressured in the same measure as rotations of the screw bar.

The first effect was excruciating pain in the whole body

Imagine a gradual thrust on scalp of a person. First to be pinched hard are sensory areas of the head below the skin surface. This generates excruciating pain in head, neck and facial region. Executioner may hold at a particular level to force convict into a confession and then unwind to release him to a new lease of life or wind the bar a little more for greater harm.

Since pressure on the head, courtesy the dome-shaped metal cap is diffused over its upper surface area, rather concentrated on a fraction of this area, the brain is spared extreme damage in the initial stage. But concussion irritates nerves running from the brain to all parts of the human body. Thus, excruciating pain is felt all over. The agony of the subject can only be imagined, all the more so because the man’s mouth remains shut and he can’t even groan in pain.

Jawbones were crushed in the second step

A few more turns and the jawbones feel the crunch. The joint that makes jaws move and the act of chewing food possible is smashed. Upper and lower teeth lines press hard against each other till teeth are splintered and fall apart. This obviously tips life to a point of no return even if the procedure is stopped at this stage. Further to this step, the distance to death is shortened by every passing minute.

The cavities of the eyes are next to fall to incremental pressure generated by the executioner. The front of the eyeballs being open space, pressure building up on skull bones finds escape in dislodging eyes from their sockets. So, eyes protrude and fall out. Some contraptions had receptacles in place to catch popped out eyeballs.

The brain is the last organ to be mutilated, thanks to its extremely protective casing and no free space in proximity. But the final bursts of screw batter the soft and spongy brain tissue into a pulp which must find a way out. It does so through the ear canal and the pulverized the brain literally flows out through the ear canals. Needless to say, the condemned man is dead by now.

A legacy of the Medieval period, punishment by torture continued well into renaissance period, till the latter’s philosophy of humanism prevailed. Thanks to it, the present day capital punishment subscribes to a dignified and least painful death. Convicts are neither made into a spectacle nor subjected to pronged agony, as done in past.

Enjoyed this article? Also, check out “The Five Punishments for Chinese Slaves“.

Previous Article
Juana Maria: The Isolated Woman of the Remote San Nicolas Island
Next Article
Gardens by the Bay: Where a Colossal Nature Park Gives New Lease of Life to Urban Singapore