While there are many things in history that have the potential to completely captivate our imaginations, and drive our sense of amazement, there are very few happenings that leave us feeling entirely perplexed, and in consequence, in complete awe. The story of the Codex Gigas is one such happening. For over 700 years, this book has fascinated scholars all across the globe, with time only adding more questions than answers.

In literal terms, the Codex Gigas translates to “Giant Book” in Latin. Apart from being famous for being the largest book to exist from medieval times, it also gained immense recognition for its contents. Some scholars believed that the book was written by the Devil himself, and have hence, dubbed it “The Devils Bible”. The manuscript measures about 3 feet tall, a foot and a half wide, and about 8.7 inches thick. Additionally, it weighs a staggering 165 pounds. Photo of the actual “Codex Gigas” taken from a stereoscopic camera. (National Library Of Sweden)

The origin of this book still remains unknown. In this regard, the only indication of its age, and where it comes from, is thanks to a note tucked into the pages of the manuscript. According to this note, it is said to have been written at the Monastery of Benedictine in Bohemia (present-day Czech Republic) in the year 1295.

Eventually, the book found its way to another monastery in the town of Brevnov, near Prague. From here, it only reappears in scriptures some 300 years later, when Rudolf II, the Emperor of Rome took the book to be studied by his court to his castle in Prague. This is where it remained for about half a century, until July 1648.

During what would be the final clashes of the famous Thirty Years’ War, the Swedish army plundered the city of Prague, and stole the book, among many other treasures, bringing it back with them to Stockholm. Here, it became part of Queen Christina’s personal collection, until being relocated to at the National Library of Sweden in Stockholm in the eighteenth century.

Codex Gigas: The contents of the book

As mentioned previously, apart from the peculiar nature of its origins and size, scholars across the globe have been rather enthralled by the contents of the book. Aside from containing the entire Latin Bible, the book also contains some other popular writings of the time, including other religious writings, some reference books, and medical texts.

Basically, the book appears to try and capture all the world’s knowledge at the time, in it. In addition, the Codex Gigas also gets its name from a rather strange, full-page image of Lucifer, the fallen angel. The image has the devil sitting in a crouching position, as if ready to jump out of the page at the reader. He has been portrayed with a green face, piercing red eyes, the characteristic red horns, and two red tongues. 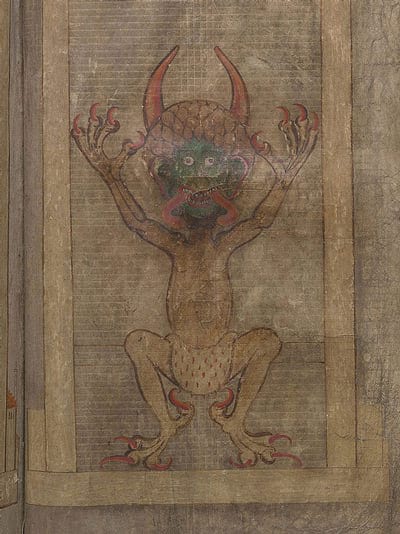 The infamous photo of Lucifer from the manuscript. (Per B. Adolphson / Wikimedia Commons)

But why does this picture exist in the first place?

Well, according to the legend, a monk from the Benedictine monastery was to be walled up alive (a common punishment at the time) for breaking his vows, and bringing shame to the monastery. To make up for his sins, the monk decides to create a book that contained all human knowledge at the time, in an effort to bring glory to the cloister he disgraced. The monk promises to complete the book within the night, however, as time progressed, he realizes that the task is pretty much impossible.

The story goes, the monk seeks the help of the devil to help him accomplish the task. The devil gives the monk the power to create the book from start to finish in one night, and from his help, the monk created an image of the devil as a homage. Some believe that the devil wrote it all by himself and signed it with his portrait.

Despite how the book came to be, it really is a remarkable literary and visual feat. To this day, everyone who comes to see it is completely enchanted by the sheer volume of the words, and extant beauty of the imagery.

Enjoyed this article? Also, check out “The Unsolved Mystery Behind the Devil’s Tramping Ground in North Carolina“.