Devil’s Tramping Ground is an empty 40 ft in diameter circular patch of woods that is barren of plant life. The US state of North Carolina appears to be a place full of startling and amazing natural phenomena. One such phenomenon was the vanishing of the first English colony in North America. The colony was established in 1585 on Roanoke Island in Dare County of North Carolina. Sir Walter Raleigh had sponsored the colony.

There was no trace of the mysteriously vanishing of the colony, except for the word “Croatoan“, which was scrawled on a tree.

Another popular haunting mystery of North Carolina is the Devil’s Tramping Ground in Chatham County. It is one of NC’s famous ghost stories that remain a scientific mystery even today.

Devil’s Tramping Ground is approximately 80 km south of Greensboro and roughly 12 km off the State Route 902. There is a sign that says “The Chatham County Vortex,” and points towards the haunting site.

Legend says at the stroke of 12 every midnight the devil sneaks up one path, stomps around in a circle for a while and then leaves along a second path. In the process, the devil kills all life within the circle. 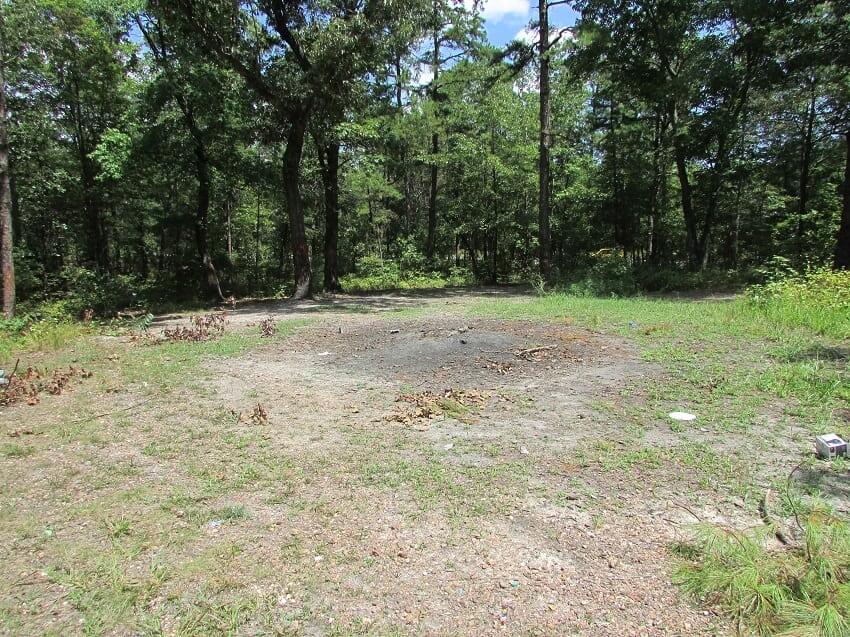 Several other explanations have been given for the barrenness of the circular tramping ground.

According to one classic version, the ground was the site of a battle between two rival native Indian tribes. Blood spilt and socked the ground during the gory battle. Ever since then nothing ever grew on the site.

Another version says the location was the burial ground of Croatan, one of the greatest Indian tribal chief. Out of respect for the chief, the Indian gods are keeping the site barren.

A modern-day explanation for the barrenness of the Devil’s Tramping Ground is that it was the site of the landing of a UFO. Radiation from the UFO’s engines is said to have permanently destroyed the fertility of the site.

The obsession with the supernatural appears to have started with the arrival of the settlers from England, Scotland and Ireland. These immigrants arrived during the 18th century and settled along the course of the Cape Fear River. Especially in places like the Appalachians and the Uwharries.

Along with their personal possessions, the immigrants brought in their faiths and beliefs like the devil. The devil was a major part of their culture. They were genuinely obsessed with the supernatural, ghosts, witches and goblins. Such demon-haunted immigrants came to America.

It is but natural that much of North Carolina’s folklore originated from the Scot-Irish mindset. The Scot-Irish were such people that they named any strange place after the devil. There are several such locations in North Carolina. Some of them include places like the Devil’s Rock, Kill Devil Hills, a Devil’s Courthouse and two Devil’s Forks.

According to legend, if a person places an object in the middle of the path the devil throws it away in order to dance at night. To disprove this story, years ago a journalist allegedly spent a night at the Devil’s Tramping Ground with his two dogs. Later, he claimed that he heard footsteps.

Some people have also claimed to have seen red glowing eyes in the middle of the Devil’s Tramping Ground’s circle.

This leads us to believe that the Devil’s Tramping Ground’s circle is home for some nocturnal animal or some spooking folks. However, locals have passed down the legend from generation to generation.

Today, the visitors find that the barren circle’s diameter has shrunk to just 20 feet. They also see that the place is littered with beer cans, cigarette butts and ash from the bonfires left behind by revellers.

Meanwhile, scientists are yet to conclude as to why nothing grows at the Devils Tramping Ground. Scientists are of the opinion that the soil at the site could help solve the barren land mystery.

Years ago, soil scientist Rich Hayes of Chatham County conducted a number of soil tests at the Devils Tramping Ground. The property belongs to the Dowd family. In his attempt to find a non-devil-related reason for the barren land mystery, he took soil samples from both inside and outside the circle.

He then tested the soil samples for copper and salt contents. High concentration of these two items could turn the soil infertile. Hayes said the test data showed that the soil in the circle had higher levels of pH, zinc, copper and sodium than the soil outside the circle.

However, he said, plants could still survive in inside the circle as the levels of the elements and metals are not toxic for the soil.

The soil tests threw up more questions than answers.

It was then that Hayes turned his attention on to the pile of ash at the centre of the Devil’s Tramping Ground circle. He said campfires could be one of the factors pushing the vegetation away from the circle. He said fires raise levels of pH, potassium and zinc.

Previous Article
Fort Montgomery: When North America Made a ‘Monumental’ Mistake on the Other Side of the Border
Next Article
Thilafushi: The Good, Bad and Ugly of the Garbage Island of Maldives