Cardiff Giant: The Colossus That Charmed and Mislead America 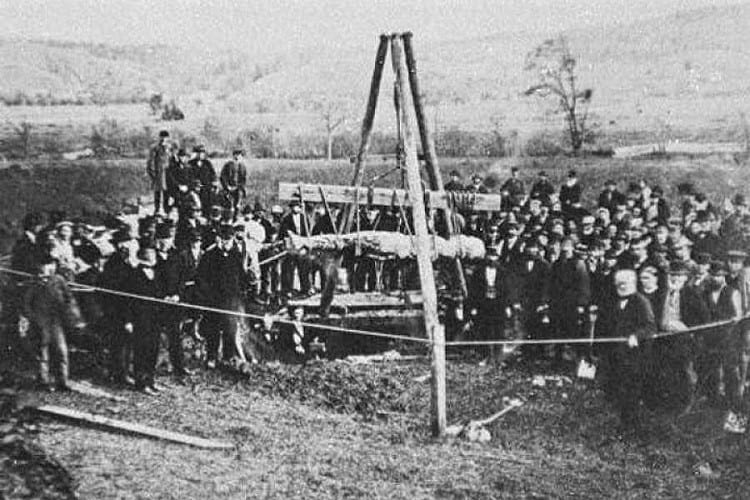 The Cardiff Giant, an enormous ten-foot tall stone man-made an astonishing and newsworthy emergence out of the ground on October 16, 1869. The structure was excavated with the aid of a few workers while digging a well at the back of the barn of a farmer named William “Stub” Newell in Cardiff, New York.

Formation of the Cardiff Giant

The Cardiff Giant was the brainchild of George Hull, a dynamic and resourceful tobacconist and get-rich-quick con artist. To reap huge financial gains, the idea of the Cardiff Giant, its subsequent burial and eventually a much sensational exhumation bloomed in his mind during the course of a business trip to Iowa.

In 1867, amid a business trip, Hull got embroiled in an argument with a Methodist revivalist preacher Reverend Turk while venting opinions on a theological debate focusing on a biblical passage. Hull, being a resolute atheist, was thoroughly asserted that the Holy Bible should not be taken seriously.

On the contrary, the revivalist minister believed that the literary significance of the Bible is undeniable. He went on insisting Hull that even the phrase which says “there were giants in the earth in those days” should be thought about as nothing but factual.

This incident sparked off Hull’s vivid imagination. He conjured up the figure of a gigantic stone-made human in his mind which he could pass off in the garb of a petrified man. If executed right, he pondered, the rip-off might permit him to strike a blow against religion. He realized that he could not just use the dummy mammoth to scoff at the Biblical literalists, but make immense wealth out of the undertaking as well.

Making of the behemoth 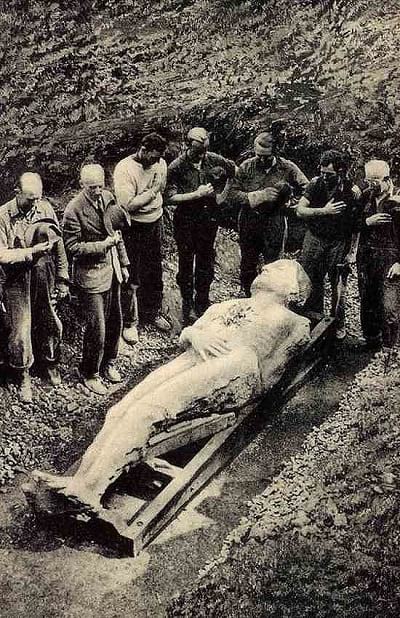 In the subsequent two years, Hull expended almost $3,000 to bring the mock-up into being. He started out in 1868 by visiting Fort Dodge, Iowa, wherein he secured a massive five-ton block of gypsum by way of claiming that it would be used for a statue of the late Abraham Lincoln.

Hull then transported the block by ship to a Chicago marble supplier and stonecutter who had agreed to assist with the scheme in barter for a chunk of the earnings. He created the giant statue after being sworn to maintain secrecy.

Hull posed as the model while a couple of sculptors spent the late summer of 1868 fabricating the gypsum slab into a bogus anthropological marvel. The statue evolved into a naked man lying on his lower back with his right arm clasping his stomach. His one leg intersected the other and face flaunted a puzzling half-smile.

The workers covered the exterior of the sham with sulfuric acid to give an aged, rugged look. Hull even inserted pins into the frame to give the impression of skin pores. When completed, the pseudo giant stood over 10 feet tall and weighed almost 3,000 pounds.

The figure was then shipped to the village of Cardiff in New York through a secret mission. It was positioned in a pit and blanketed with soil. The property belonged to William “Stub” Newell, a farmer and distant relative of Hull.

On 16th October 1869, Newell, who too was tightlipped in an outright greed of the imminent riches, employed two unsuspecting workmen to dig a well. He ordered them to dig the ground closely at the spot wherein the giant was buried, and the workers thus made their startling discovery.

Discovery of the interred giant and subsequent euphoria

As the news of this discovery spread, hundreds of spectacle-watchers and amateur archaeologists started rushing to the discovery site to seek a glimpse of the giant and understand what the confusion was all about.

And despite the fact that the giant was downright a poorly finished creation, people were wonderstruck with sheer amazement by a way of the probability that it was real. Throughout the entire social prism ranging from farmers to the pre-eminent truth seeker like Ralph Waldo Emerson (American philosopher), everyone expressed admiration and astonishment while looking at the huge stone sculpture.

Controversy and exchange of views on the giant’s veracity

Archaeological surmised that the superhuman bust was a complete faux. A few geologists even discerned that they could not gather any appropriate and exact motive to attempt in digging a well precisely at that specific spot from where the giant was uncovered. Some of the theologians and preachers, on the contrary, vindicated its authenticity.

In Syracuse, the monstrosity was subject to a careful and focused scrutiny. Othniel C. Marsh, a palaeontologist from Yale, called on the statue and declared it an inept and phoney object. He further mentioned that the chisel marks were still visible on it. These should have eroded if the giant had been cloistered within the ground for a considerable length of time. However, the public appeared to care little about the fact that it was, in reality, a fake. They continued coming in numbers to witness it anyway.

Replica of the Cardiff Giant

The mammoth structure was auctioned off to a team of businessmen headed by David Hannum for $23,000. From then onwards, the giant embarked on an expeditious tour around Syracuse in New York. Soon, the ever-burgeoning popularity of Cardiff caught the attention of famous circus stage manager and showman P.T. Barnum. He engaged in many rounds of discussions and negotiations with the businessmen to purchase the gypsum-made cash cow for $50,000. But eventually, the deal did not happen. Barnum mustered up the courage to fabricate a replica of Cardiff Giant.

He commissioned a sculptor and started showing it off to the general public at a Manhattan museum as the bonafide piece. He amassed deep fortunes in the arrangement. He claimed that the actual Cardiff Giant owned by the syndicate was a counterfeit entity.

Cardiff Giant resting in peace at the Farmers’ Museum 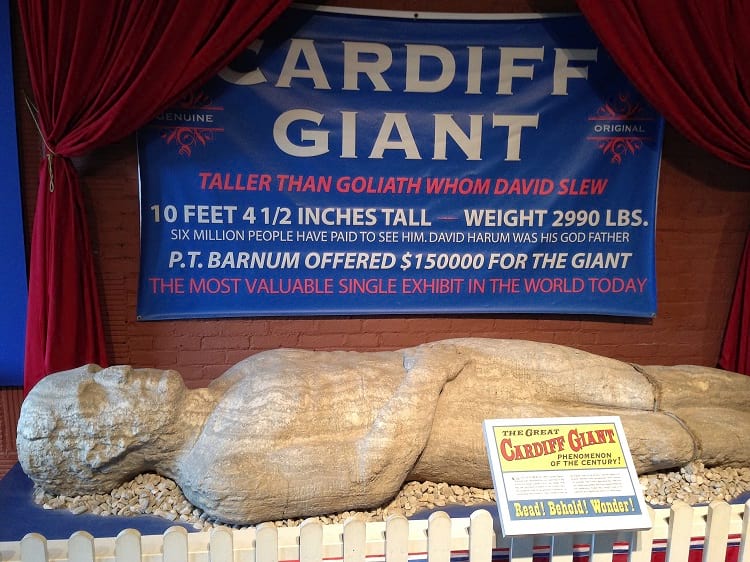 The Cardiff Giant was put on display at the Pan-American Exposition held in the year 1901. However, it attracted very little attention and the response was much less impressive than expected.

Later, Gardner Cowles, Jr., an American businessman bought the statue to enhance his recreational room. In 1947, he sold the structure to the Farmers’ Museum in Cooperstown, New York.

Therefore, after spending nearly 79 years rambling through the United States like a vagrant, the Cardiff Giant finally returned to its roots on 18th May 1948 and was redeemed as a museum showpiece. The ‘petrified man’ is currently on permanent display at the Farmers’ Museum following its acquisition by the New York State Historical Association for $30,000 and the Barnum’s replica is an exhibit at the Marvin’s Marvelous Mechanical Museum in Farmington Hills, Michigan.

Enjoyed this article? Also, check out “Spaghetti Tree Hoax: When BBC Convinced a Million Viewers That Spaghetti Came from Trees“.

Previous Article
33 Thomas Street: Windowless Skyscraper in the Midst of Bustling New York City
Next Article
A Tale of Resilience: Poon Lim, the Chinese Sailor who Survived 133 Days Castaway in the Atlantic Ocean