The Wallace Line: The Invisible Line of Bio-Diversity in the Indian Ocean 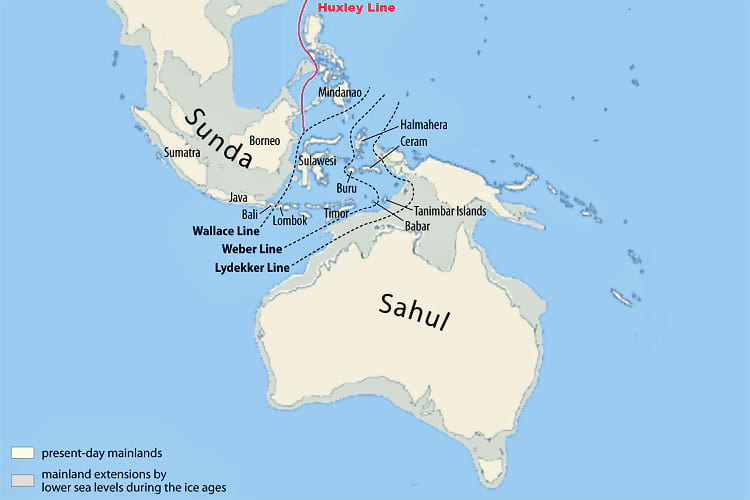 The Wallace Line is an invisible and imaginary line that stretches across the Indonesian islands to demarcate the evolutionary differences of the fauna in that region. It gives us an interesting insight on the biogeographical history of the area. 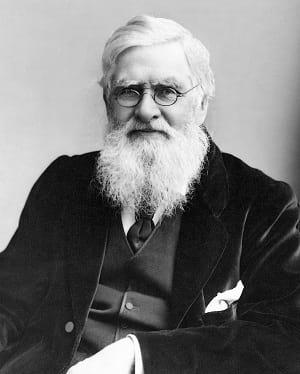 Alfred Russel Wallace, a 19th-century British naturalist, travelled throughout the Malay Archipelago from 1854 to 1862 in order to study the natural history of that area. While exploring the Indonesian islands, he discovered that the fauna on some of the islands was different from that found to the east of those islands. In fact, the islands such as Sumatra, Borneo, Java, and Bali had animal life that was similar to other parts of Asia. They had tigers, rhinoceroses, tarsiers, and tapirs. On the other hand, the Lombok, Sulawesi, and Timor islands had marsupials, monotremes, tree kangaroos, and racquet-tailed kingfishers that were similar to the animal life in Australia.

The Indonesian islands to the east of the line are referred to as belonging to the biogeographical realm of Wallacea. They are separated from Australia and New Guinea by another imaginary line called Lydekker’s Line, which was delineated by the naturalist Richard Lydekker in 1885. Between these two lines is another line called the Weber Line along which both Asian and Australian fauna and their hybrid species are equally present.

Starting in the 19th century, European naturalists developed the field of biogeography which is the study of how fauna came to be distributed around the earth over time. Using the presence of fauna as the main indicator, the naturalists divided the earth’s surface into biogeographical realms. Furthermore, they subdivided these realms into ecoregions containing different biomes and habitats. In each realm, the fauna more or less evolved in isolation, completely separated from the fauna of the other realms by natural barriers that prevented them from migrating. The largest natural barriers are the oceans, followed by deserts and mountain ranges. Islands, being isolated, are an easier and more convenient ecosystem for studying biogeography.

Biogeographers use the continental drift theory to explain the distribution of fauna. Until 140 to 175 million years ago, the continents of Asia and Australia were connected. During this period, the indigenous animals could move all across the huge landmass and reproduce. Then the continents started to drift apart, the ocean levels rose up, and the islands of the Malay Archipelago were formed on the continental shelves between the Asian and Australian continents.

A continental shelf is a part of a continent which has sunk under water.

The Sunda Shelf connects Asia with Borneo, Bali, Java, and Sumatra. Australia and New Guinea are connected by the Sahul Shelf to these islands. So, the ocean separated the land masses and this led to the evolution of different animal species on the two continents and on the islands between them over a period of some 50 million years.

During the last ice age, between 70,000 to 40,000 years ago, the ocean levels fell dramatically and opened up land bridges between Asia and the islands and between some of the islands and Australia. At this time, various fauna crossed these land bridges to the islands and roamed across them. However, the ice age soon ended, and the ocean levels rose up to 25 to 125 meters, effectively closing off the land bridges between the islands and the continents. The fauna were thus isolated on the islands that they happened to be on at that time, and, thereafter, they evolved in unique ways by adapting to the environment on these islands. Eventually, they became distinguishably different. These islands form the Wallacea biogeographical realm, and a very large number of endemic species of fauna now live on them.

Over 500 islands lie to the east of Bali across the Lombak Strait and these are known to the Indonesians as Nusa Tengagara. From the northern islands of Lombok, Sumbawa, Flores, and Alor, these islands stretch over 1,300 km to the southern islands of Sumba, Savu, Roti, and Timor.

While studying and collecting birds in the area, Wallace noticed that the birds on some of the islands that were close to each other were very different and that the birds on some of the islands that were far from each other were of the same species. This was particularly noticeable on the island of Bali, which had 50 percent different birds from those on the island of Lombok, despite the fact that they were separated by a distance of just 25 km of water. But 97 percent of birds on Bali were present on Java. Also, 75 percent of the birds on Lombok are Asian species, while 14 percent of the birds on Bali are from Australia. Wallace was perplexed by this discovery. What was it that had made the birds that were capable of migrating to and from the islands remained on their respective islands, and why had they evolved in such distinctly different ways over the centuries?

The explanation for this goes back to the ice age when there was a land bridge between Java and Bali, whereas, in the same period, there was a water channel between Bali and Lombok. Some of the birds, being good flyers, crossed the water channel to Lombok and flew further to settle on the eastern islands. Similarly, birds flew from Sumbawa across the Sape Strait to Komodo and from Alor across the Ombai Strait to Timor.

After the ice age ended, when the water channels between the islands deepened and widened, these isolated birds became distinct from those that had remained on Java.

Of the 564 bird species in Nusa Tenggara, 144 are endemic. On the other hand, the island of Sulawesi’s endemic population includes 62 percent of mammals and reptiles, 27 percent of birds, and 76 percent of amphibians. Possums, and marsupials, which are related to kangaroos, crossed the land bridges from Australia to Sulawesi during the ice age. However, these animals could not cross the Makassar Strait to reach Borneo from Sulawesi.

Although there are differences in flora as well along the Wallace Line, they are not as distinctive as the fauna.

Enjoyed this article? Also, check out “Kármán Line: The Hypothetical Line That Delineates the Earth’s Atmosphere from Outer Space“.

Previous Article
Kuldhara, the Abandoned Village of an Aggrieved Indian Community
Next Article
The Story of the Ingenious and Daring Escape from the Alcatraz