A Vomit Comet is a type of airplane that helps astronauts experience weightlessness for a short period of time to help them train for their journey into deep space. These planes are generally known as reduced-gravity aircraft and are sometimes also used while making science-fiction movie shots. Although, the reason they are most commonly known as Vomit Comets is due to the experiences of the astronauts during the flight.

These airplanes were first introduced by German engineers Fritz Haber and Heinz Haber, who were brought to the US after the Second World War, as a way to simulate weightlessness as part of Operation Paperclip. Operation Paperclip existed to hire German scientists to give American’s an advantage in the Cold War that followed. Humans have been the most common fliers of the Vomit Comet, but the planes have also been used to experiment on other animals such as cats and pigeons.

How do they work?

The way these planes work is by giving the fliers a sense of feeling in a zero-gravity environment. Although these environments aren’t always zero gravity, they are just micro-gravity where the force of gravity is not zero, but just so small that it’s almost undetectable. An actual micro-gravity environment would require an extensive journey into deep space that is far away enough that the force of gravity is reduced to almost negligible. This journey isn’t impossible but inadvisable, because the few probes that have achieved this have never returned back to Earth. Since it is an expensive and almost impractical event to fly into deep space for testing purposes, scientists have found ways to recreate the same environment on Earth. The NASA Reduced Gravity Program in Houston, Texas provides a weightless environment for space flight testing and training purposes through a reasonable reimbursement funding process. The flight of the plane follows a projectile trajectory, called a parabolic path that is relative to the centre of our planet. On this path, the plane is at free fall at certain points and does not have exertion from any force originating from the ground. This absence of ground reaction force causes the feeling the weightlessness. 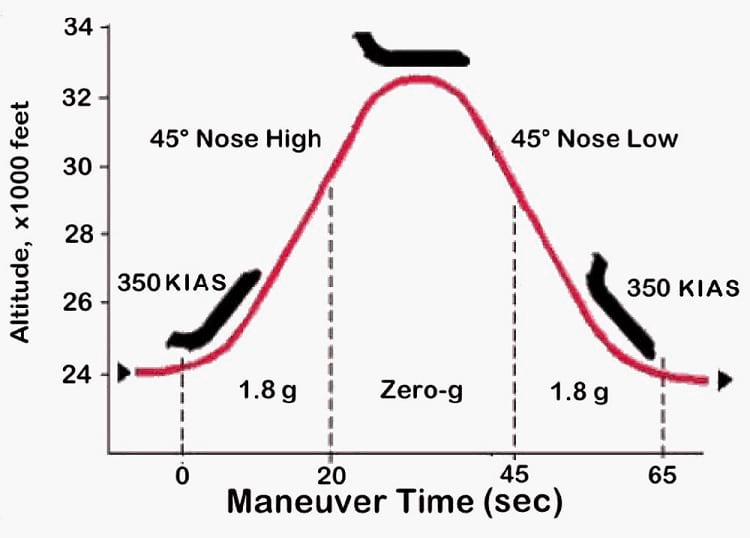 The trajectory of zero gravity flight to achieve weightlessness. (NASA)

To go more in detail about the exact science, the precise moment of weightlessness occurs after the plane has climbed the parabolic path, reaches a neutral or ‘zero-lift’ state, before falling back down into its trajectory. During its zero-lift state, the thrust of the plane is reduced and its tip is lowered, causing a 25-second experience of zero gravity during one parabolic flight. In one astronaut training session, they fly anywhere between 40-60 parabolic paths consecutively during which about 60% of the fliers vomit due to airsickness. This common event during weightlessness experiences has earned the plane its notorious nickname of Vomit Comet.

According to research, anxiety is the most important cause of airsickness. Their body realizes a sense of panic which makes it (them) feel ill and hence, they end up (with) projectile vomiting. 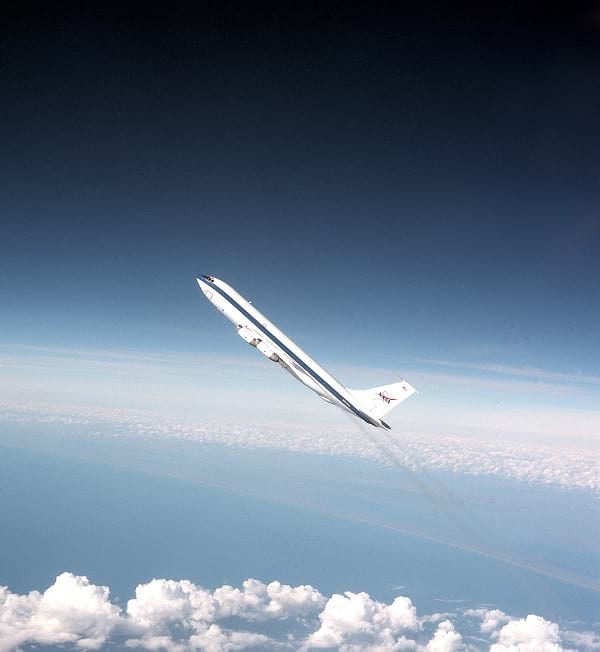 What happened to the Vomit Comet?

After a decade-long journey starting in 1994, the Vomit Comet was retired for use on October 31, 2004. The Vomit Comet has flown more than 140,000 flights in over 8 planes over the Gulf of Mexico. According to the lead test director of NASA’s Reduced Gravity Research Program, even though the plane provided a unique environment to give astronauts the most realistic training, it was getting increasingly harder to maintain the plane and its costs.

The plane was very useful for astronauts-in-training, engineers and scientists to do various testing and research on board. Currently, there are educational programs that let college students participate in the weightlessness experience, and more than 2000 students have flown these flights. This is a great initiative as it helps to prepare the next generation of space explorers.

Enjoyed this article? Also, check out “Sex in Space – Is It Possible? and Why It is Important“.

Previous Article
Deep Blue – The IBM Chess Computer That Beat Chess Grand Master Garry Kasparov in 1997
Next Article
Ultima Thule: A Snowman-Shaped Celestial Body That is the Farthest Object a Space Probe Has Ever Captured