Trigona Spinipes: The Combative Stingless Bee that Lives in Dung 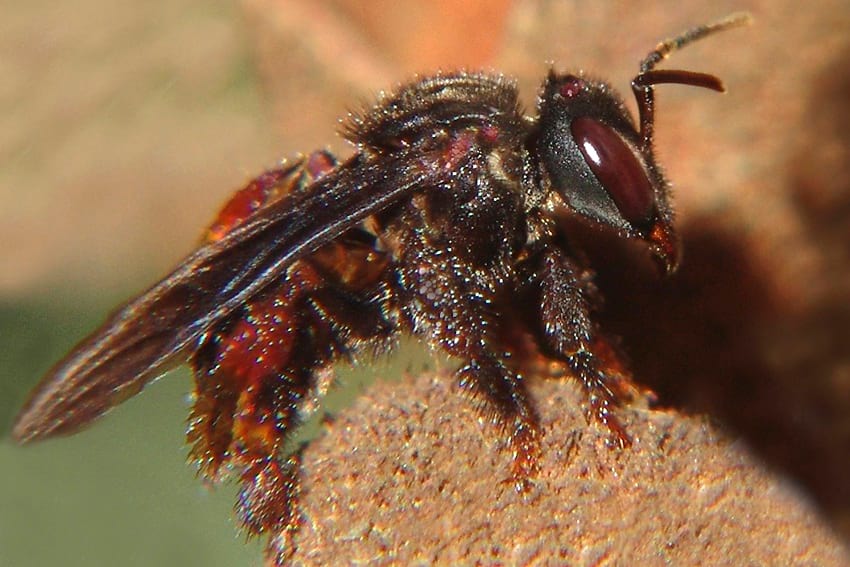 Life cycles of different bees are similar but their lifestyles and feeding mechanisms vary. And while bees are usually known for organized community living and nectar collection, there are bees that defy the norm and do not sting and builds a nest with animal dung. Like, Trigona spinipes, found in Brazil, Paraguay, Argentina, and elsewhere in South America.

Stingless, but not unarmed

Trigona spinipes belongs to the family Apidae. It nests on trees, buildings and other human structures. Inability to sting doesn’t mean inability for self-defence. It can be extremely belligerent and attacks an opponent in a swarm. Shooting into natural openings and hair growth of adversary is a significant offence. Their two mandibles, each having 5 teeth, can inflict a painful bite. The bite, at times, can be so strong that the mandibles can dislodge and prove fatal/suicidal for the bee on the offensive.

Nest and the food source are abridged with odour paths

For gathering food, the stingless bee creates odour-trails. These are zigzag pathways, none going straight from the food source to the nest. Bends on way are meant to mislead an invasive organism, which, otherwise, reach the nest following odour trail. However, the trail is a flawless guide for the friend bees, to move between the food source and the nest. On the flip side, Trigona spinipes too poaches on odour track of other species, to steal from food source of those species.

Literally lives in the trash

They nest at greater heights on vegetation compared to other species. Like any other bee, Trigona spinipes collects into a swarm prior to nest formation. Bifurcation of tree branches is the preferred location. The honeycomb is made up of wax, plant fragments, mud, resins and debris, including dung. Waste material of the bee colony, called scutellum, makes the framework of the bee nest. The length of the nest can vary from 50-60 cm, same for the width. Nest formation is not seasonal, but need-driven. As the honey produced & stored is in a polluted environment—it is unfit for human consumption. Nevertheless, it is used as medicine. A matured nest of stingless bees Trigona spinipes. The greenish part is a recent addition and is possibly cow or horse dung. (Jorge Stolfi / Wikimedia Commons)

Males are forced into a solitary existence

The life of a bee begins as an egg (3 days duration). Development in the next two stages, larva and pupa, follows a divergent course resulting in the formation of three distinct classes of bee: queen (female), worker (female) and drone (male). The female larvae which are fed a special quality of food, develop into queen bees, others develop into worker bees. The number of worker bees in a colony can vary from 5000 to more than a lakh. Male bees are driven out from the nest. Expelled males (drone) lead a solitary existence (it may last from 4-6 weeks) or join the swarm of worker bees to search for food, and coincidently, find a virgin queen to mate with.

Only one male mates with Trigona spinipes queen

The virgin queen flies out from her parent nest, with a bunch of worker bees, to settle at a new location. The odour of the queen bee attracts males (drone) who lie in wait outside the queen’s new abode. The queen bee flies out to mate. Only one male, out of 30 to 100, from nests scattered far and wide, gets a chance to mate with her. On this count, Trigona spinipes differs from most honeybees which mate with more than one male. After mating, the queen returns to the nest to lay eggs. The eggs that are fertilized by the male, become females (queen bees and worker bees). All unfertilized eggs develop into males.

Queen and worker compete for producing more number of males

The Queen is larger in size and is a prolific egg producer. As head of a nest, she is central to all activities in the honeycomb. The worker bees, being females, also produce eggs, albeit in a limited number. Thus workers and the queen bee become rivals. Unfertilized eggs laid by both of them (queen mates with just one male, so a sizeable part of her eggs remain unfertilized, and workers never mate) develop into male bees (drone). The rivalry goes to the extent that they eat away each other’s unfertilized eggs. Queen tries damage control by placing her unfertilized eggs in the same cell as fertilized ones, to confuse the worker bee. Ostensibly, the queen, as well as the workers have a vested interest in promoting their respective male progeny.

Like most honeybees, Trigona spinipes is a pollinator of agriculture crops, hence farmer’s friend. However, it harms some crops like passion fruit where farmers must guard against it to avoid losses.

Previous Article
Changing the Skull’s Shape to Adhere to the Community’s Beauty Standards
Next Article
Tipu Sultan: The Pioneer of Rocket Artillery