A painting of the battle of Guntur depicting the British confrontation with the Mysorean rockets. (Charles H. Hubbel / Wikimedia Commons)

The 18th Century ruler Tipu Sultan—the Tiger of Mysore or Sher e Mysore is known and admired for his bravery and heroic resistance against the British imperial forces.

The image of Tipu’s Tiger, a wooden toy tiger pinning down an English officer, comes to mind when one thinks of Tipu Sultan. Tiger epitomizes Tipu Sultan and his rule; his throne, weapons and armour were decorated and embellished with tiger figures, while live tigers guarded his palace.

Born in 1750 as Sultan Fateh Ali Sahab Tipu to Hyder Ali—the Sultan of Mysore, he succeeded his father in 1782. Both of them known for nearly bringing the East India Company to ruins made the British empire quaver with fear. Riding on his father’s legacy, and strongly opposing the involvement of foreign rule and rulers, Tipu Sultan arrested the influence of the colonizers in his state.

Along with being a fierce and valiant warrior, Tipu Sultan is also known for the technological and administrative reforms he brought to the Kingdom before and after ascending the throne. Of the many reforms is his expansion of Hyder Ali’s use of rocketry, this led to the invention of early Mysorean rockets, that served as templates for present-day rockets.

Rockets have been used for a long time in wars; the earliest records show the Chinese using rockets to fight the Mongol invaders in 1232 CE, followed by the Arabs, Mughals and even some European rulers. But these rockets were made of bamboos or cardboard and wood. The modernization of rockets was carried out by Hyder Ali and his son Tipu Sultan for fighting the colonial forces.

The Sultan of Mysore, Hyder Ali, innovated the gunpowder rockets to transform basic rockets into lethal weapons. This gunpowder gave the rockets a fierce bursting, a distinct odour and colour, and a terrifying noise.

These rockets were further enhanced by Tipu Sultan’s expertise and ingenuity and were encased in metal with the best mechanical structure. The deployment of rockets shook the British military and paralyzed them with fear in the Battle of Pollilur, during the First Anglo-Mysore War of 1780. Terrified and horrified British labelled the rockets “Flying Plagues”. We see a Mural depicting the victory scene of Mysore in the summer palace of Tipu Sultan at Darya Daulat Bagh in Srirangapatna.

Mysorean rockets were a major shift from Chinese rockets that used bamboos for support. These rockets were the first weaponised metal rockets to be used in war. The iron casing allowed greater compression to the rockets with higher thrust and a larger range of 2.4 km, the farthest at that time. They were then fastened onto swords or poles for stability and better accuracy. The rockets had twin side sharpened blades mounted on them, and when fired in a group, spun and wreaked significant damage against a large army.

On the military ground were specially trained rocket men or jauk as they were known in the royal court. These rocket men were part of the military since Hyder Ali’s regime and their strength only increased in Tipu Sultan’s time, from 1500 to 5000. 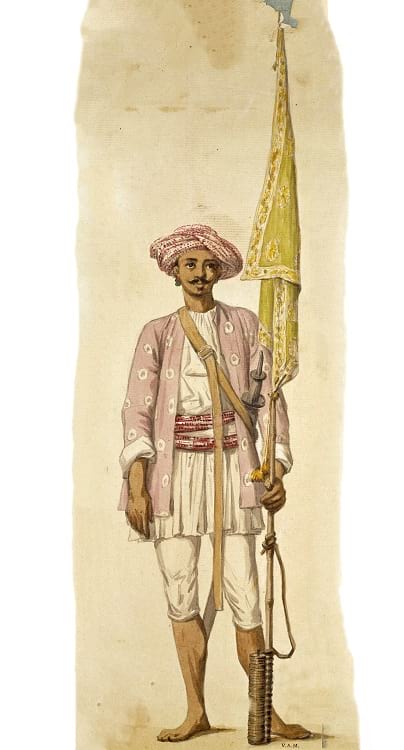 A soldier of Tipu Sultan’s army using his rocket as a flagstaff. (Robert Home / Wikimedia Commons)

The presence of the rocket men in the troops is recorded in Tipu Sultan’s military manual—Fathul Mujahidin. Written under Tipu Sultan’s supervision it outlines the strategies to be employed in the war ground. One of the many important aspects covered in the manual is the usage of rockets in military campaigns. According to the manual, each regiment was to have 200 rocket men. They were assigned the task of operating and launching the rockets at an angle calculated from the diameter of the cylinder and the distance of the target. 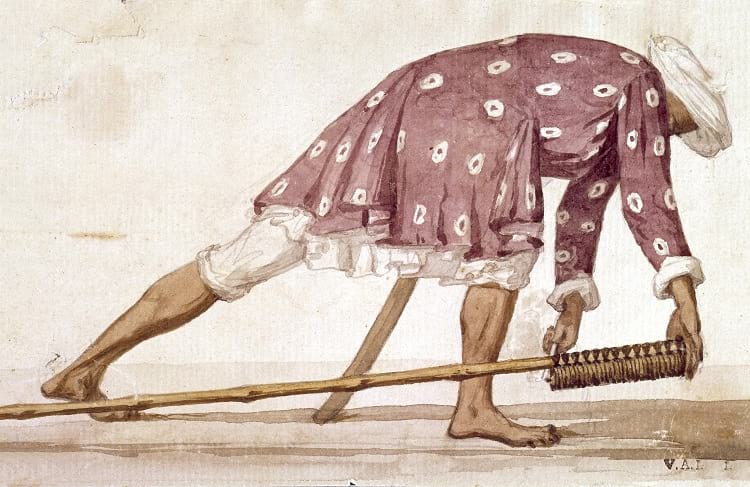 Indian soldier of Tipu Sultan’s army igniting the rocket with one hand while lifting the head of it with the other. (Robert Home / Wikimedia Commons)

In addition to the rocketeers, wheeled rocket launchers capable of launching five to ten to rockets simultaneously were used also used.

To further enhance the rocket artillery, Tipu Sultan had set up research facilities—Taramandal Pet at Srirangapatna, Bangalore, Chitraguda and Bidanur. Here, men were trained in calculating the launching angles and distances and experiments were conducted to improve rocket technology.

From Mysore to England

After the defeat and death of Tipu Sultan in the last Anglo-Mysore war of 1799, the British took over his capital at Srirangapatna and seized their armoury. After seizing the armoury, the British studied the rockets and sent many rockets as samples to England. Two of these rockets now displayed in the Royal Museum of Artillery in London.

In England, William Congreve analysed these rockets and employing the techniques of reverse engineering, he studied the details of what made the Mysorean rockets deadly weapons. Studying the recoiling, launching and stability of the rockets, he made a few changes to them and released them as Congreve rockets. These rockets were then used by the British in the Napoleonic wars.

In 2018, archaeologists excavated a dry well at Nagara Fort in Shimoga—part of the Kingdom of Mysore, to unearth about 1000 corroded rockets of 23-26 cm in size. Archaeologists believe these belong to the 18th Century and must have been stored there during Tipu Sultan’s rule. On digging up the dry wells, the excavators said, the mud smelled of dry ammunition and gunpowder. Each of the rockets and shells discovered was filled with potassium nitrate, charcoal, and magnesium powder said the State Archaeology Department Assistant Director R. Shejeshwara Nayaka.

While there may be contradictory views and debates on the nature of his rule and kingdom, one cannot deny Tipu Sultan the stature of being the pioneer of rocket artillery.

Enjoyed this article? Also, check out “Jack Parsons: The Sex Occultist Who Was Key in Sending America to Space“.

Previous Article
Trigona Spinipes: The Combative Stingless Bee that Lives in Dung
Next Article
Trump Gives Green-Light for Moon-Mining: How Does it Affect Outer Space Politics?