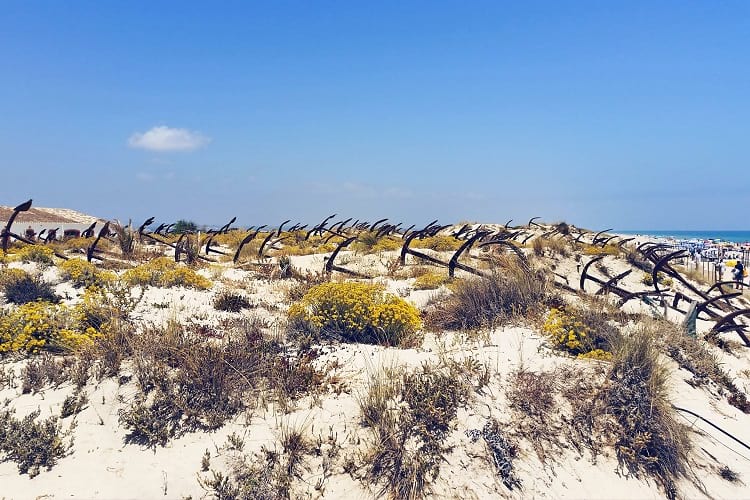 Tavira Island is located in the Algarve, the most southern region of Portugal, and it was once home to a tuna fishing community. If you take a walk along the Barril beach on the island, you will come across a poignant reminder of this community — rows of anchors neatly aligned on the sand dunes. This part of the beach is known as the anchor graveyard.

The island is famous for its beaches and is part of the 170 square kilometer Ria Formosa nature park. Just over 37 kilometers away to the west, near Faro, the existence of a couple of tuna fish farms is a reminder that the bluefin tuna once passed through the waters of the Algarve.

The tuna is considered a delicacy all over the world on account of its sweet and tender flesh. It is particularly favored for making sushi in Japan.

One of five species of tuna, the Atlantic bluefin tuna is the largest. It can grow to over 13 feet in length, can weigh around 900 kg, and can live for 10 years or more. Furthermore, it can dive to depths of 1600 feet in the ocean, and swim at speeds of 64 kilometers per hour. The Atlantic bluefin tuna prefer to eat pelagic fishes such as sardines and herrings, and invertebrates like squid which they swallow whole. 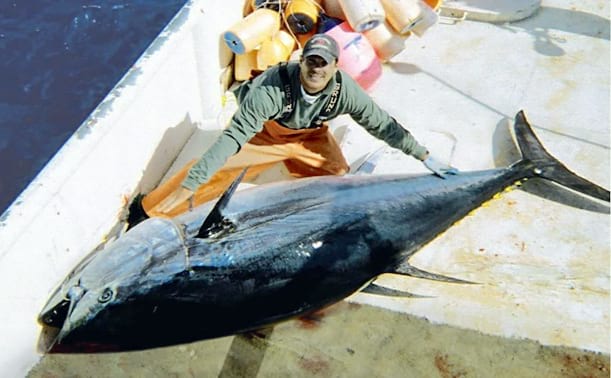 The fishermen of Tavira island usually caught the tuna when it was heading into the Mediterranean since, at this time, its flesh contained more fat. The fat was essential for the tuna to stay warm in the Atlantic. Another reason for the increased fatty content was that the tuna was getting ready to spawn. On its return journey to the Atlantic, the tuna was comparatively thinner.

There are various fishing techniques for catching tuna – purse seining, longlining, pole and line, trolling, and handline. However, the technique that was most commonly used in the Algarve was called Almadraba.

The Phoenicians, who settled in Portugal’s coastal areas around 1200 BCE, are believed to have invented the fishing technique called Almadraba to catch tunas and other large fish.

The technique involves laying a maze of wooden frames covered with netting in the path that the migrating tuna are likely to take. These wooden frames need to stand firm against the ocean currents as well as against the wild thrashing of the caught tunas. To accomplish this, the fishermen secure the frames with hundreds of anchors, cables, and buoys. The enclosed paths guide the tuna into a central area. Once the tuna are gathered there, the boats close in and block the paths. The largest fish are then caught by their tails and hauled onto the boats.  Once the fishermen are satisfied with the catch, the fishing equipment is gathered up and the small fishes are set free.

Even three thousand years after its invention, the Almadraba still remained the most effective technique for catching fish by the fishermen on Barril Beach.

The fishing community on Barril beach

Between 1841 and 1967, Barril beach was home to around 80 families who depended on tuna fishing for their livelihood. They lived in small, whitewashed cottages during the tuna fishing season from April to September. Like their ancestors, they fished the tuna using the Almadraba fishing technique, employing lots of iron anchors. After catching the tuna and unloading them on the beach, they transported the tuna via the specially built one-kilometer long railway to the village of Pedras D’el Rei.

Unfortunately for the fisherfolk of Barril beach, in the mid-1960s, the tunas changed their migratory path to and from the Mediterranean Sea, moving further away from the Algarve coast. Fishing for tuna became unsustainable and the fishermen had no choice but to seek other means of livelihood. The fishermen never came back to Barril beach, abandoning their cottages and leaving all of their now useless fishing equipment, including the anchors, to rust and decay. 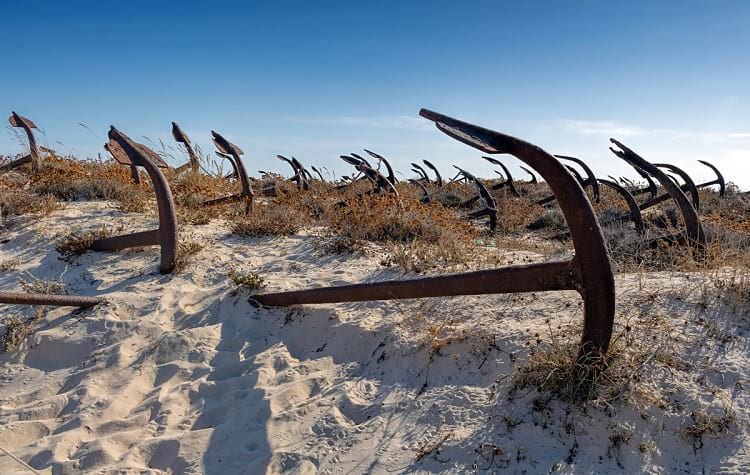 Anchors near the shore of Barril beach. (Pxhere)

The anchor graveyard on Barril beach

Sometime after 1966, people who came to Barril beach noticed that the rusting anchors that had once lain haphazardly all over the beach were now arranged in precise rows in one part of the beach. All the anchors are placed in the same way, on their sides with one hooked end embedded in the sand and the other one stretching above. It is assumed that some of the locals lined up the anchors in this manner, but no one knows who exactly it was and why they did so.

As there has not been any increase in the number of anchors on the beach, no one is transporting anchors from other areas to place them here. The graveyard contains only the two hundred odd anchors that the fishing community abandoned on the beach when they left the area.

While the arrangement of anchors is interesting, it is equally remarkable that no one has stolen them. As rusted and twisted the surfaces of the anchors may be, they are still solid iron and have a lot of value in the scrap metal market. The reason why they remain untouched may perhaps be that the anchor graveyard serves as a memorial to an old way of life to which the people in the area can never return to.

The decline of the traditional fishing industry in the Algarve region coincided with the rise of the tourism industry in the area. The beautiful white sand beaches and the clear sea waters attract a lot of foreign visitors to Tavira Island every year. The cottages of the fishermen have now been converted into shops, restaurants, and beach huts for the tourists who come to spend a leisurely day on the beach. The mini-train that once transported fish now transports visitors to the beach.

As Tavira Island has protected status on account of being part of the Rio Formosa Nature Park, the anchor graveyard is likely to remain preserved as a relic of the historic fishing heritage of the people of the Algarve.

Enjoyed this article? Also, check out “The Unusual Glass Beaches of California and Hawaii“.

Previous Article
Animal Suicide: Do Animals, Like Humans Resort to Ending their Own Lives?
Next Article
Min Min Light: The Elusive Phantom-Lights of the Australian Outbacks