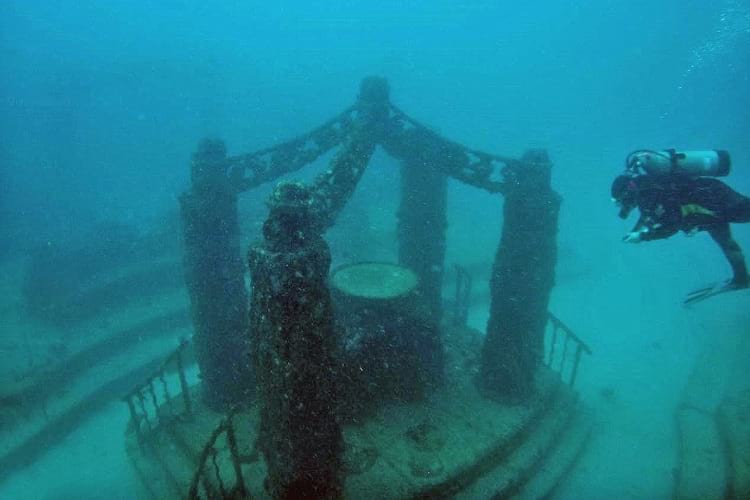 The Neptune Memorial Reef is both the largest artificial reef in the world and an underwater columbarium. It is a member of the Green Burial Council and provides an alternative to burials on land. Located at a distance of five kilometres from the coast of Key Biscayne in Florida, it is spread over 65,000 square meters and lies under 40 feet of water.

The reef’s inauguration took place in 2007 after it got clearances from various government bodies. As per these clearances, its construction can withstand most natural disasters, and it is not likely to pollute the marine environment of the Florida coast.

A reef is a natural underwater structure formed of sand, rocks, corals, sponges, and other marine materials. It occurs in relatively shallow waters near a landmass. The most common reefs are the handiworks of corals. These marine invertebrate animals live in colonies and secrete calcium carbonate to form exoskeletons. Over the years, as the corals propagate, their hard skeletons create the framework of the reef.

Coral reefs create a protective barrier for coasts, and they also provide food as well as shelter structures for some marine life. By living in the coral reefs, these creatures are better able to protect themselves from predators and bad weather. Furthermore, coral reefs are safe areas for spawning.

Gary Levine, a diver, came up with the idea of creating an artificial reef to promote marine life and also to serve as a recreational area for divers. He joined the Neptune Society, one of the largest cremation companies in the US, to develop an underwater cremation memorial site.

Usually, people store cremated ashes in urns or spread them over a waterbody or under trees. An underwater cremation site was an unusual proposition. However, it did attract a segment of the population that had a fascination for the ocean and all things marine. They liked the idea of getting themselves memorialized by placing their ashes in a marine environment. Moreover, contributing to the formation of a coral reef in this manner was something they found appealing. Their families also liked the idea of an eco-friendly memorial site, where, aside from remembering their loved ones, they would be able to observe the fish and other marine creatures on the reef. Some of the family members acquired scuba diving certifications solely for this purpose. Family members, who are unable to dive, can snorkel, swim, or boat over the memorial site to scatter flowers.

Design of the Neptune Memorial Reef

The artist Kim Brandell was given a free hand to conceptualize the Neptune memorial reef. He designed its first phase to look like a sunken city, akin to the Lost City of Atlantis but with a lot of modern design elements. Plans for other phases of the memorial reef, yet to be built, include dance and music themes, with sculptures of dancing figures and musical instruments. The sunken city has two entrance gates made of brass and flanked by bronze lions. From these gates, several paths lead to a central plaza and then diverge from it. These paths pass under 25 feet high archways and have benches for divers on either side. Picket fences and columns, each weighing thousands of pounds and set on equally solid bases, line the pathways. 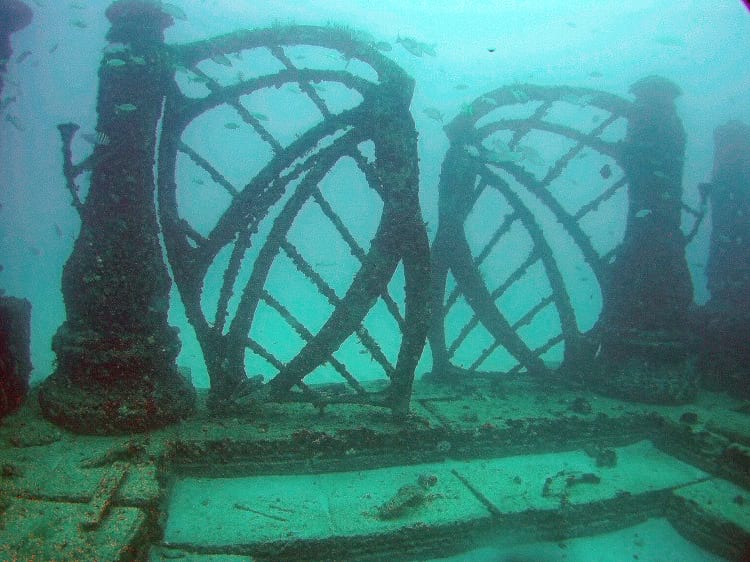 One of the gates of the underwater graveyard. (Elkman / Wikimedia Commons)

Throughout the area, there are globes and statues of sea creatures, and these are fixed to paver blocks on the ocean bed. Neptune Society plans to install a gigantic statue of the Roman sea god Neptune as well as other sculptures. 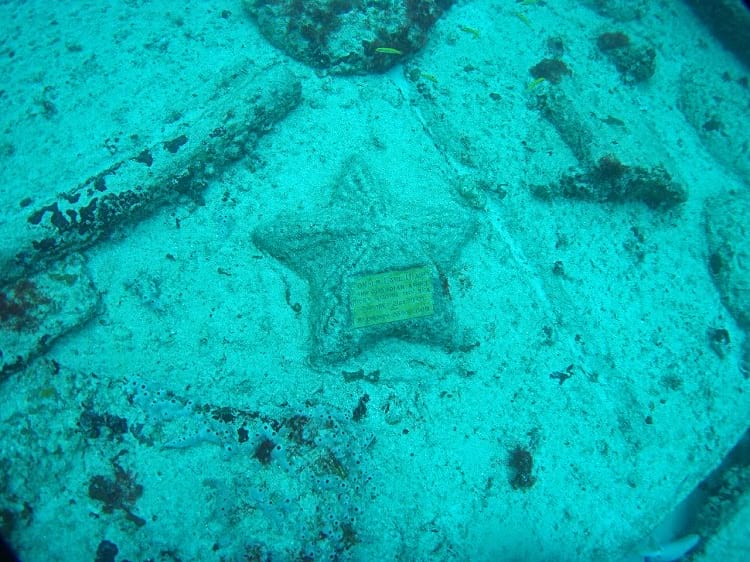 Construction of the Neptune Memorial Reef

All the structures on the site are constructed from brass, bronze, steel, and cement specially made for underwater use. The columns and archways are of concrete-encased steel rods. Installing these monumental structures with boat cranes was a difficult task for commercial divers.

Before the completion of the site, a Category 5 hurricane hit Florida. The storm destroyed some of the structures, and marine engineers had to go back to the drawing board to design even stronger structures.

The Memorials on the Neptune Memorial Reef

For a memorial on the reef, a cremated person’s ashes are mixed with concrete to form 10-pound blocks resembling natural objects and marine life. Family members can choose shapes like seashells, corals, starfish, stingrays, and turtles, and can place tokens of the deceased in the memorial blocks. The deceased individual’s name and details are inscribed on a copper plaque and attached to the concrete block. These blocks are then placed on pavers on the ocean bed or attached to the manmade structures of the reef.

Family members can participate in creating the blocks and placing them on the reef. Although the growing coral will eventually cover the memorial blocks, the reef management will ensure that the plaques will always be visible. Also, they will see to it that the families can visit the memorials without disturbing the marine life and destroying the evolving reef.

Under advice from marine biologists, the Neptune Society shaped and textured the memorial reef to act as substrates on which coral can form and thrive. Eventually, the coral will create natural reef structures. The bases of the structures were designed to attract benthic animals. These are tiny organisms that survive in the sediments on the ocean bed. Holes and spaces in the structures provide habitats for fish.

The Neptune Memorial Reef has created a thriving marine ecosystem by attracting marine creatures that are indigenous to the Florida coast. The diverse fish species, which have made the reef their home, include Sergeant Majors, Rainbow Parrotfish, Angelfish, Bar Jacks, Atlantic Rays, and Bluehead Wrasse. The artificial reef surfaces have also attracted benthic animals like sponges and hydroids. Divers have also spotted Loggerhead Turtles, Lobsters, Crabs, and some Sea Urchins on the ocean bed. Additionally, they have seen various types of Moray Eels hiding in the crevices of the reef.

With over 14 species of coral now contributing to the building of the reef, the project has become successful in revitalizing the ecology near the Florida coast.

The Neptune Memorial Reef provides a beautiful and meditative environment for people to perform memorial rites for their loved ones. Also, its developing tropical ecosystem, which is now teeming with marine life, is of considerable interest to students, researchers, and scientists. The reef is also becoming a popular destination for tourists who like to scuba dive and explore underwater bioverses.

Previous Article
The Secret Behind the Centennial Light that Continues to Defy Planned Obsolescence
Next Article
Byblos, Lebanon: A World Heritage Site and the Oldest Continuously Inhabited City in the World