Barra Airport, Scotland: Where Planes Take Off and Land on a Beach 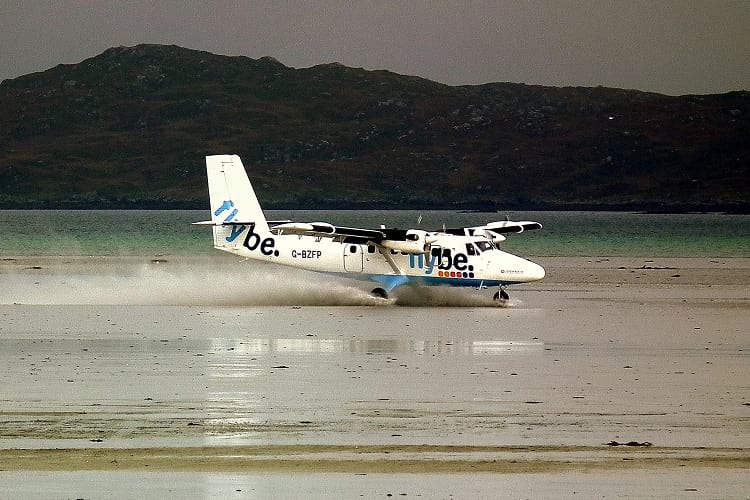 Ever thought of taking off from and landing on a long stretch of white sand, with ocean waves lapping at the beach edges? If you are ready for a great flying adventure, you should head for Barra Airport in Scotland. It is the only airport in the world where the runway is a beach.

It is located in Barra, an island of the Outer Hebrides off the west coast of Scotland. At the northern end of Barra, where the village of Ardmhor extends to the village of Eoligarry, there is a magnificent white beach made up of hard compacted shell sand. The beach is called Traigh Mhor which, in the Gaelic language, means Big Beach.

At the beginning of the 1930s, when the authorities were considering building an airport on the island of Barra, the local postmaster, John MacPherson, suggested that the beach would be suitable to be used as a runway. His suggestion was taken up and aircraft began using the beach in June of 1933. It wasn’t until August of 1936 that the airport, also known as Barra Eoligarry Airport, was officially opened for scheduled air services.

The Highlands and Islands Airports Limited, which owns and operates most of the regional airports in Scotland, manages Barra Airport. The airport is licensed to allow passenger flights and pilot training flights. With its beautiful, scenic location, the airport has regularly featured in various polls as one of the top 10 airports in the world.

The world’s most scenic airport

Barra airport offers a unique experience, with passengers boarding and disembarking from the aircraft on the beach. The airport staff loads and unloads the passenger luggage at the same time. The well-equipped airport has a nice terminal building. The café in the terminal is popular for its local seafood, soups, home-baked food, and great coffee. 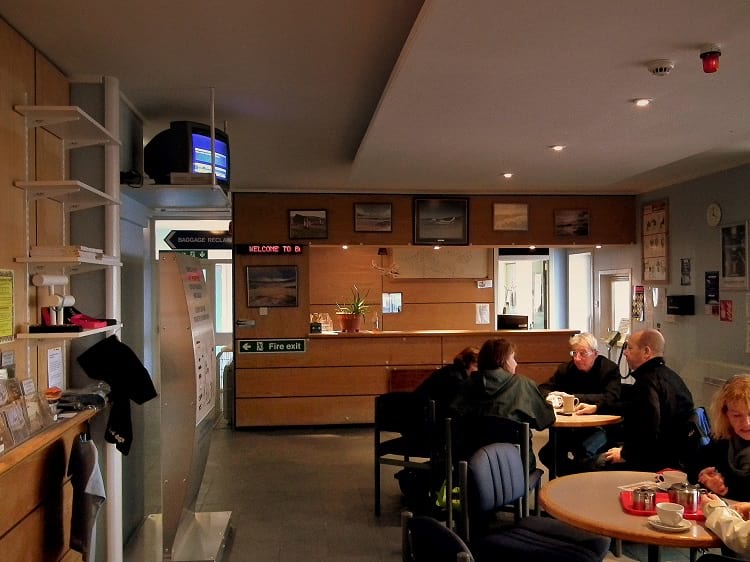 Inside the terminal of Barra Airport in 2010. (© Stephen J Mason / Flickr)

You can get some spectacular views from the air traffic control tower. To the east, you can see the island of Orasaigh and, further away, the islands of Fuday and Eriskay. At the back side, to the west, you can see the high sand dunes on the beach of Traigh Eais and the waves of the Atlantic rolling onto the beach.

There is a strobe light on the air traffic control tower that is turned on to indicate that an aircraft will be arriving soon. The airport is well-prepared to handle all sorts of emergencies, but, so far, there hasn’t been any need for the emergency services at the airport. The dolphins and seals in the Atlantic Ocean are actually more in need of the airport’s emergency services. They frequently get stranded on the Traigh Mhor beach, and require the assistance of the airport’s fire crew to get steered back into the ocean. 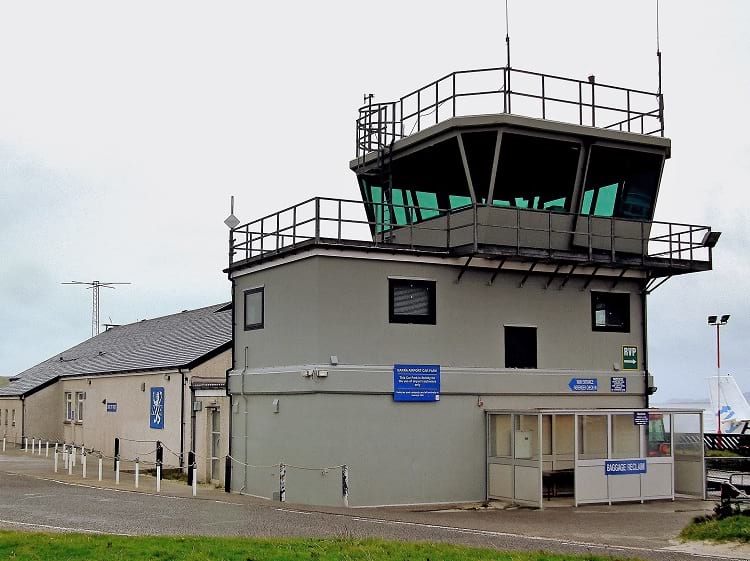 The airport does not have a license to operate at night, but it can be used at night in case of emergencies. The Scottish Ambulance Service operates helicopters which are easier to land on the beach even at night. During night landings, the airport authorities place reflective strips on the beach to demarcate the runway and the area is illuminated with the headlights of vehicles.

Loganair, a Scottish regional airline operates De Havilland Twin Otters aircraft to provide air service to Barra from the seaport of Glasgow, 226 km away, and from the island of Benbecula, which is close to 55 km from Barra. The beach is large enough to accommodate the comparatively short take-off and landing runs of the Twin Otters.

The three runways on the beach are laid out in a triangle, taking the prevailing wind directions into account. It is advantageous for aircraft to land and take-off into the wind as this reduces aircraft roll, and also reduces the ground speed required to attain flying speed. The runways are set in 07/25, 11/29, and 15/33 directions to ensure that all landings and take-offs can be made into the wind. 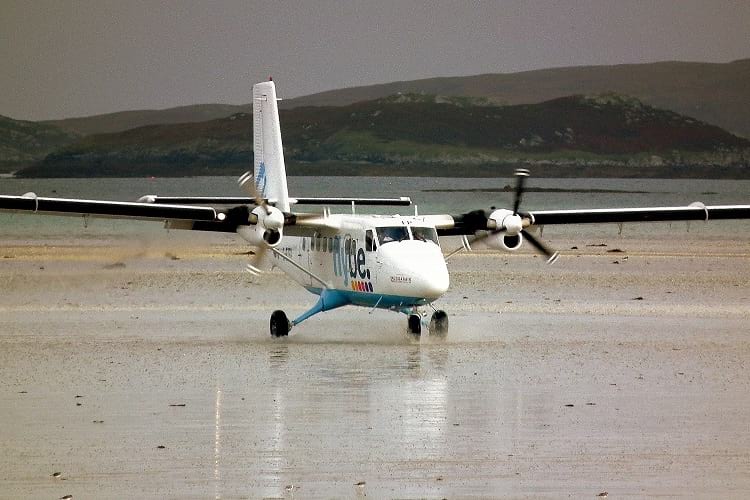 The first runway is 2621 feet long, the second one is 2231 feet, and the third one is 2776 feet long. Wooden poles mark the ends of the runways, and these poles are strong enough to withstand the force of the tides twice a day. Flight timings are dependent on the tides; the runways are operational only when the tides are out. At high tide, the runways are completely underwater. 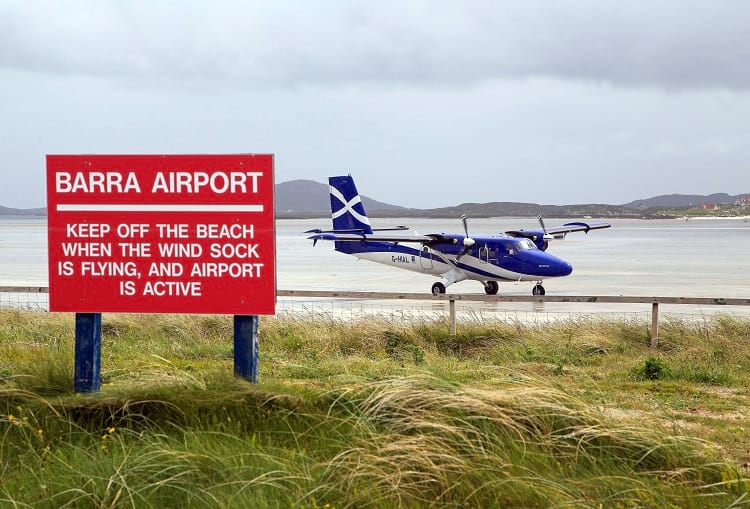 Sign at Barra Airport to keep off the beach when the airport is active. (Tom P / Flickr)

The sandy and sheltered beach of Traigh Mhor is famous for cockles; these are bivalve molluscs are a local delicacy and people eat them raw or cook them with salt, vinegar, garlic, or wine. Thanks to the presence of these molluscs, the beach is also known as The Cockle Strand. People come here to collect cockles, and also on account of its beautiful natural environ. It is popular with locals and tourists alike. A tour of Barra is not complete without a stopover to see the aeroplanes landing and taking off from the beach. When they come to the beach, however, you should check the windsock. If the windsock is flying, the airport is in operation and you should stay away from that area of the beach for your own safety.

Traigh Mhor is also a popular filming location for many film production companies. The stunningly white beach runways make a beautiful picture against the backdrop of the vivid blue of the Atlantic Ocean. Also, the aircraft landing and taking off from such a beach is a grand and dramatic sight that is a film-maker’s delight.

Barra’s beaches attract more and more people every year. Over 10,000 passengers now avail of the airport. There are over 700 passenger aircraft flying in and out of Barra airport, and there are also around 60 private aircraft that use the beach runways every year. The airport has boosted tourism, a major source of income for the residents, and has made providing emergency medicare easier. Once thought of as a luxury, Barra airport is now a valuable facility for the local community on the island.

Enjoyed this article? Also, check out “Reynisfjara: The Black Sand Beach that Looks Straight out of a Gothic Novel“.

Previous Article
Space Food: What Do Astronauts Eat Outside the Earth’s Atmosphere?
Next Article
The Tragedy of Jallianwala Bagh