The Unusual Glass Beaches of California and Hawaii Sea glass is nature’s way of churning garbage into stunning pieces of beauty. The formation of sea glass occurs from normal glassware that has been discarded on beaches or in saltwater. Broken pieces of glass tossed away in the sea, sometimes even from shipwrecks, go through a process of being broken down further and smoothed by being hurled around in the water. A product of the combined efforts of man and nature, it takes several years for beautiful sea glass to form. A high-quality piece of sea glass is one that is well frosted and has smooth edges. The discarded glass is broken down by the roughness of the sand and also gets smoothed as it rolls around. Typically, the abrasive action of the sand is like that of sandpaper used on rough surfaces for a refined, finished look. The pits formed in the glass due to hydration, lend a softer feel to it. Hydration is when the soda and lime that goes into the process of making glass, leaks out, leaving pits. These two elements play an important part in the formation of sea glass. As they trickle out of glass objects, these elements sometimes react with minerals in the seawater, leading to the formation of new mineral deposits on the glass. These deposits are responsible for the glittery appearance of sea glass, putting it in the same category of quality as gemstones.

The existence of sea glass started around the time man started making glass. In the olden days, the legend goes that each time a sailor died at sea, the Mermaids would weep for him. Their tears would crystallize as they fell into the water, creating sea glass in the process. Hence the popular name, ‘Mermaid Tears’.

Sea glass can be found near water bodies that have had a dumping ground nearby. Earlier, it was a common practice to discard waste in water to be carried away by the current. Fort Bragg in California is one such place which was a common dumping ground for the town till 1967.

In 1906, a water body behind a lumber company was established as the official dumping ground for the town’s waste, known as Site 1. When this started filling up in 1943, another site was assigned for the dump, known as Site 2. However, the dumping ground was again moved in 1949 to the area which today, is known as ‘Glass Beach’.

Beaches in the neighbourhood of old ship dockyards like the Chesapeake Bay also have sea glass washed ashore from time to time. Ships often discarded their waste into the water when they docked at a port. Another famous Glass Beach is in Eleele near Kauai in Hawaii. The beach is in the Hanapepe Bay, easily identified by the large gasoline tankers that are common in the area of Port Allen Harbour. Similarly, a dumping site of the Soviet era has now turned into a mesmerising Glass Beach on Ussuri Bay in Russia. 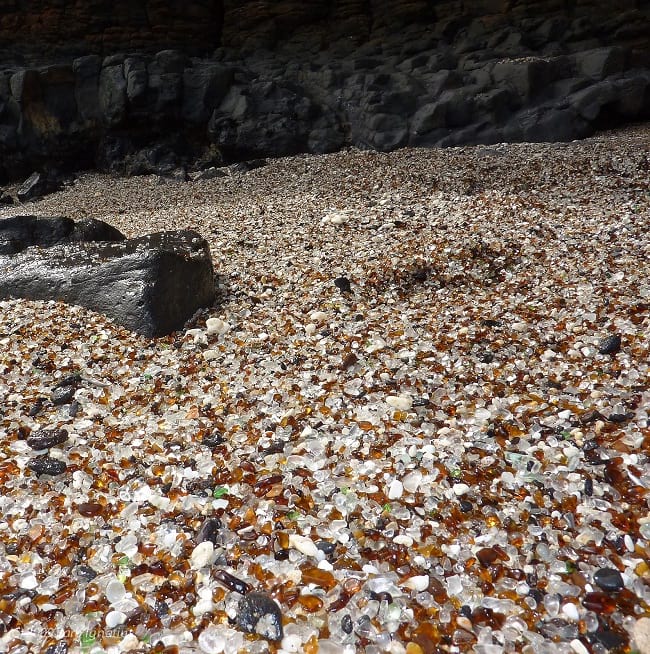 The best time to look for sea glass is during low tide or when a storm has passed, due to which the strong water currents will wash sea glass ashore or probably expose old buried sea glass.

The variety of this ‘reverse gem’

Natural gems are made by nature and given finishing touches by man. Sea glass is also referred to as ‘reverse gem’ for the simple reason that it is made by man and finessed by nature. The value of sea glass often depends on the colour of the glass.

The sapphire sea glass comes from discarded medicine bottles that were made from cobalt blue glass. The rare ruby glass comes from old discarded taillights, lanterns or traffic lights. It could also be from old discarded beer bottles of a famous beer of the 1950s sold in a royal ruby red coloured bottle. The purples, pinks, lime greens and other rare colours were often used in making perfume bottles or artwork which, when discarded, turned into similar hues of sea glass. A lot of lavender and pink sea glass could also be the result of clear glass reacting with magnesium to create a lavender coloured glass, or selenium reacting to give a pink coloured sea glass. A whole lot of beer bottles, coloured glass shampoo bottles, and bottles of bleach could be the reason behind sea glass in greens, browns and aqua colours. 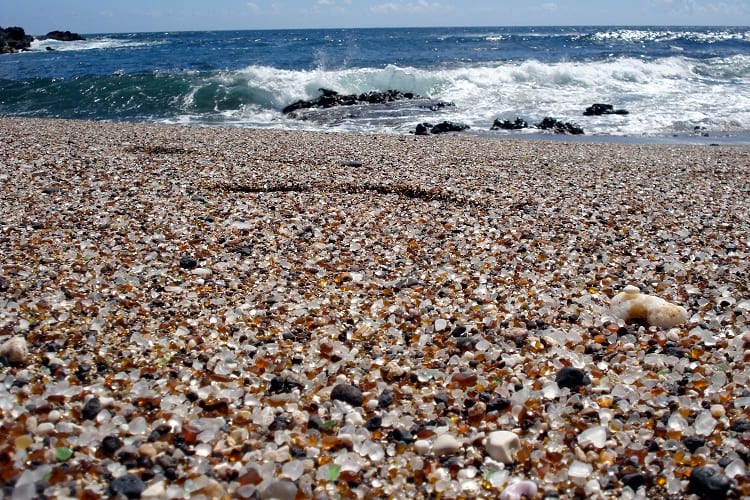 Whatever the colour, this gem of the sea has become rare with the advent and use of plastics. So, whenever you come across one, make sure you spend the time to admire the work of nature.

Enjoyed this article? Also, check out “Reynisfjara: The Black Sand Beach that Looks Straight out of a Gothic Novel“.

Previous Article
Nemi Ships, the Floating Palace, and the Lynching of Fanatic Dictators
Next Article
Battle of Saragarhi: When 21 Valiant Indian Soldiers Held Their Ground, Fiercely Fighting Against Thousands of Afghans