Min Min Light: The Elusive Phantom-Lights of the Australian Outbacks 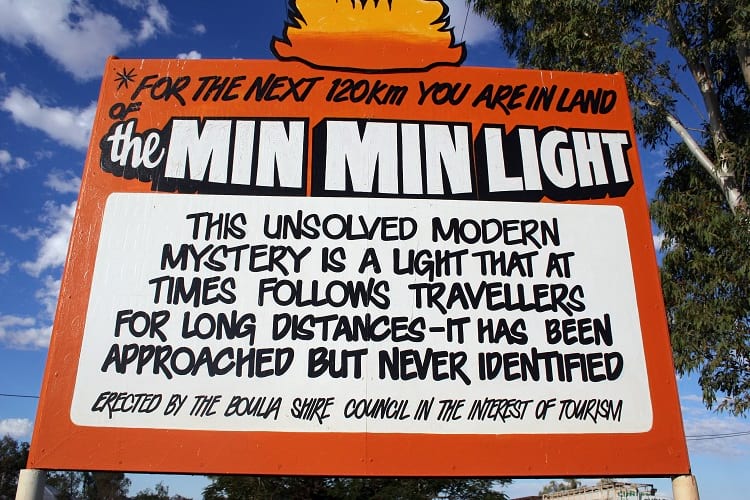 The small outback town of Boulia in Queensland, Australia, is home to a peculiar phenomenon that has been spooking trespassers for ages. These sentient ‘ghostly orbs of light’, dubbed Min Min light by the locals, are usually described as about the size of a football, and can grow in size or brightness, as well as alter in colour, while they follow the travellers in their path.

Though these Lights were first documented by Europeans in 1838 (in the book “Six Months in  South Australia”) after the colonization of Australia, they have been prominent in Aboriginal lores for aeons before. The cause of this mysterious phenomenon has eluded scientists as well as conspiracy theorists since its discovery.

The origin behind the name of the Min Min Light, revealed in a Sydney Morning Herald article about an eyewitness’ account, is in itself quite interesting. Published on January 25, 1947, the story states the account of a local stockman who claimed he was followed by these lights on his way to Boulia.

The Min Min Hotel, burnt down in 1918, was notorious in the era as a den for modified alcohol and drugs, where a lot of people died over the years in brawls, murdered by robbers, or from the use of drugs and tainted alcohol, and were buried behind the hotel. The graveyard remains to this day.

The Stockman (who gave his story for the article) had passed by the area shortly after the infamous hotel had burnt down, and he witnessed a “strange glow appear right in the middle of the cemetery” which “got bigger, till it was about the size of a watermelon” as quoted to the police. He claimed to have tried to ride away, but kept being pursued by the phantom lights till he arrived at the town boundary. The police had not believed his account, but there have been thousands of alleged sightings since the Stockman’s report. The name of the bewildering ghostly lights stems from this mysterious Min Min Hotel around which the sightings were reported.

Word about the Min Min Light has been a part of local folklore for centuries before the Stockman’s report. The stories date back so far that it is difficult to ascertain an exact timeline of the sightings, having passed on through the oral traditions of the Aboriginals.

The Aboriginal Australians have always been wary, and have consistently believed that the lights were the spirits of their dead ancestors risen from their graves. This theory got a further boost with the increase in sightings of these phantom lights in the Boulia region after Europeans started killing off the Aborigines. The natives believed their ancestors had risen to avenge the atrocities against the community.

Phantom lights around the world

The Min Min Light have also been reportedly spotted in other regions of Australia such as the Northern Territory, and northern New South Wales. In fact, stories of such phantom lights have cropped up in the folklore of numerous cultures around the world, most notably in the Celtic culture of Ireland, Scotland, and Wales. Popularly known as ‘Will-o’-Wisp’, these orbs appear mostly around bogs and marshes, and believed to be fairies or spirits. The popular Jack-o’-Lantern Halloween decoration stems from this folktale. Other names associated with this phenomenon include ‘fairy lights’, ‘ghost lights’, and ‘ignis fatuus’. Other sightings of this phenomenon include that of ‘Luz Mala’ (‘evil light’) in Southern American countries and the ‘Brujas’ of Mexico (believed to be witch souls), both rural phenomena that are associated with negative superstitions and are part of the local folklore.

The theories about the origin of these mysterious glowing orbs are endless, though none of them are definite. Barring the superstition discussed already, conjectures range from firefly-like bioluminescent insects, to UFOs and aliens, to the result of gaseous releases from the earth, such as those often seen at graveyards.

One of the most popular scientific theories backing the appearance of the Min Min Light is that of the Fata Morgana, hypothesized by Professor Jack Pettigrew, Emeritus Professor of Physiology and Director of the Vision, Touch and Hearing Research Centre at the University of Queensland.

Professor Pettigrew has had multiple encounters with these lights, which he had initially thought to be the planet Venus, or a cat’s glowing eyes, but then carried out extensive research and narrowed it down to a kind of mirage caused by temperature inversions when a layer of dense cold air is trapped under a layer of warm air. He called this optical phenomenon the Fata Morgana and explained that in such situations the light passing through the layers of air undergo steep refraction, making it seem as though the image is floating above the horizon or in front of the person. The Boulia region is especially conducive to this optical illusion because of the gullies and flat surfaces which can effectively trap the cool air.

The Professor backs his theory with an experiment where he recreated the appearance of the Min Min Light: while driving a car for 10kms in the requisite weather conditions with the headlights on, 6 witnesses believed they saw the phantom lights. Well-known Australian scientists such as Dr. Karl Kruszelnicki have vouched for Professor Pettigrew’s research.

Though the mystery of the Min Min Light of Boulia seems to be apparently resolved, it will continue to be passed down the generations. Whether it is parents frightening their children with this Bogeyman-like legend, or a reminder of the rich oral traditions of the Aborigines, the Min Min Light have undoubtedly taken on a cultural importance in Australia, featuring in books like those of Mavis Thorpe Clarke’s “The Min Min” (1967) and “Trust the Dream” (2004), and in popular Australian television series like “McLeod’s Daughters” and “Wolf Creek”.

Enjoyed this article? Also, check out “The Classic Whodunit Mystery of the Marree Man of Outback Australia“.

Previous Article
Tavira Island in Portugal and the Anchor Graveyard That is a Memorial for a Lost Way of Life
Next Article
Hindenburg: The Tragic Death of World’s Biggest Commercial Airships