Super-Trains of the Past: Trains with Jet Engine 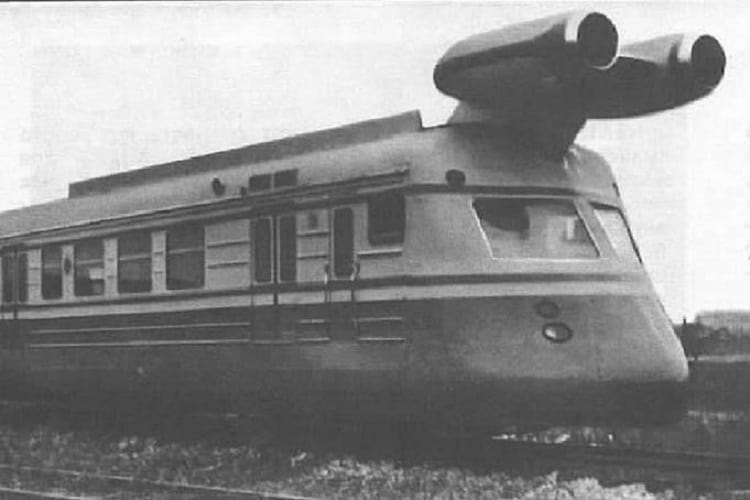 Humans have always been fascinated by speed. Since the invention of the wheel, we have been constantly trying to make it go as fast as it can. During the era of cold war, the two superpowers, the US and the USSR went head to head in building the best (i.e. the fastest) ‘Turbojet Train’. After the end of Second World War, US and USSR had been competing against each other to acquire the title of ‘superpower.’ This rivalry was expressed in terms of military superiority, political clout, economic power and technological advancement.

The inception of the super-trains

During the 1960s, the idea of powering a train with a jet engine came into the minds of scientists. This project offered wide possibilities for developing high-speed railway network in future. While there still is conflict about who invented the idea, the first train with turbojet engine A.K.A ‘Turbojet Train’ was made by ‘New York Central Railroad’ in 1966. Known as the ‘M-497’, the train was fitted with a jet pod from “Convair B-36 Peacemaker” bomber. The pod comprised of the two “J47-GE-19” jet engines. This pod was acquired from Davis-Monthan Air Force Base situated in Arizona for $5000. Initially, the turbojet engine was to be mounted in the rear of the railcar. Later, the design was changed to have it on the front.

A 111-kilometre section of straight, multiple tracks between Toledo, Ohio, and Indiana was used for the high-speed tests. An aeroplane flew ahead of the train to make sure that the track was clear and railroad ties were placed along the track in case the railcar derailed during the trail. The M-497 recorded a speed of 295.88 km/h. The M-497 was used for various purposes including snow clearing until 1977. It met its end in 1984 when it was scrapped.

Russian version of the super train

A similar development took place in USSR in 1970, when one of the ER22 head engines was modified by adding two turbojet engines. The objective of the railcar was to hit about 260 km/h. The tests were conducted on railroad terminal in Golutvin. In the first attempt, it touched a speed of about 186 kmph. In the second attempt, the engines were pushed to the maximum limit achieving a speed of 250 kmph. The Russian version of the turbojet train met a similar fate and now lies abandoned, rusting in back of a rail car factory in Doroshikha.

A model of this great piece of art and technology stands in a rail factory in Tver. These super-train projects, which could have been the means of transportation in the future, were dropped due to several reasons. First of all, these projects were not economically viable, they, in fact, consumed more fuel than the jets. Secondly, the jet engine could only move the train in the forward direction, this implied that several huge modifications had to be made. Thirdly, people were afraid of such projects, they considered the idea to be too unreliable and feared that even a minor defect in railway track would have disastrous consequences.

Enjoyed this article? Also, check out “The Idea Behind the Rotary Snowplow Train was Conceptualised by a Dentist“.

Previous Article
The Curse Of The ‘Crying Boy Painting’ That Haunted People During the 80s and Killed Many
Next Article
The Count of Morbid Love: Carl Tanzler and the Dead Maria Elena