The Count of Morbid Love: Carl Tanzler and the Dead Maria Elena Carl Tanzler outside his building. Circa 1940. (Dewolfe And Wood Collection In The Otto Hirzel Scrapbook / Wikimedia Commons)

Love stories inspire us and give us a reason to dream. Well, not all love stories. Some might end up giving you nightmares. One such bizarre love story is that of Carl Tanzler and the dead Maria Elena ‘Helen’ Milagro de Hoyos. Carl Tanzler, named Georg Karl Tänzler at birth was born on February 8, 1877, in Dresden, Germany.

He kept moving between countries before finally settling in Australia around 1914. At that time he would boast of being a doctor and an engineer, claiming to have received 9 different professional degrees. Tanzler also alleged that when he was 10 years old, his dead ancestor Countess Anna Constantia von Cosel appeared to him in a dream and showed to him the face of a strikingly beautiful dark-haired woman who would be his true love.

He returned to Germany after the World War I ended in 1918, to be with his mother. He married in 1920 to Doris Anna Shafer and had two children with her, Ayesha Tanzler and Crystal Tanzler. Upon his mother’s insistence, he moved permanently to the United States from Rotterdam on February 6, 1926, to Havana, Cuba in order to provide for a better life for his family. He finally decided to settle down in Zephyrhills, Florida, where his sister was already living and later called for his family.

Tanzler meets the women of his dreams

In 1927 he secured a job at the U.S. Marine Hospital in Florida as a radiology technician and moved there with his family left behind in Zephyrhills. At that time he changed his name to Carl von Cosel after the late Countess Anna Constantia von Cosel. He often signed his hospital records as Count Carl Tanzler von Cosel or Dr. Carl von Cosel. While working at the U.S. Marine Hospital, on April 22, 1930, Carl Tanzler came face to face with the woman of his dreams. Maria Elena ‘Helen’ Milagro de Hoyos, a 20-year-old local Cuban American woman, was the same dark-haired woman Tanzler had visions of and who was to be his true love. File photo of Carl Tanzler when he worked as a radiologist. (Florida Keys–Public Libraries / Flickr)

Elena, accompanied by her mother had come to the hospital for a medical examination and Tanzler’s heart skipped a beat upon seeing his dream woman alive, in front of him. Elena, the daughter of a local cigar maker Francisco ‘Pancho’ Hoyos, had been married to Luis Mesa since February 18, 1926. Even though Luis left Elena after she miscarried and moved to Miami, Elena was still legally married to him. A fact that did not seem to deter Carl Tanzler. 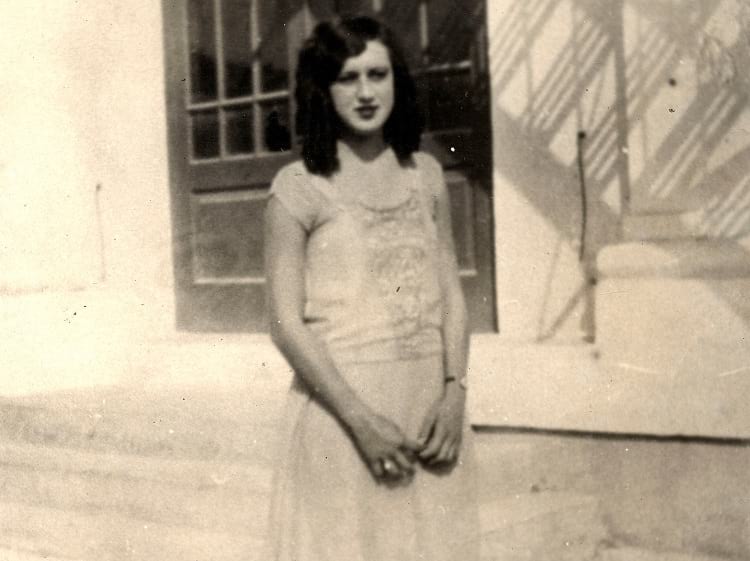 Elena Milagro Hoyos in 1926, the year she got married at the of 17. (Florida Keys–Public Libraries / Flickr)

Carl’s examination of Elena led to a diagnosis of tuberculosis, which at that time was a fatal disease with no sure cure. Carl Tanzler was not ready to see Elena succumb to her illness and with the permission of her family, started treating her on his own with the hope of miraculously curing her. With his self-professed knowledge of medical science, Tanzler started making concoctions and potions to cure Elena.

He poured all his money into medicines and possible treatments for Elena. At that time, he also became reckless and disrespectful towards hospital authorities. He would illegally transfer x-ray machines, electrical and medical equipment to the Hoyos’ house for Elena’s treatment. All this while, Tanzler showered Elena with exorbitant gifts, jewellery, perfumes, and clothing while proclaiming undying love to her but no evidence has ever been found that Elena reciprocated his feelings.

In spite of Tanzler’s prodigious efforts, Elena gave in to complications from her disease and breathed her last on October 25, 1931. A distraught Tanzler was adamant about paying for her funeral and with the permission of her family, got an above ground expensive stone mausoleum constructed for Elena in the Key West Cemetery. The Hoyos were oblivious to the fact that Tanzler had the only key to the mausoleum and had an intercom fixed so he could talk to her from the outside. He visited the cemetery every night and also serenaded his dead Elena with her favourite Spanish song. On one such visit in April 1933, Tanzler carted Elena’s body from the mausoleum to his home in a toy wagon. 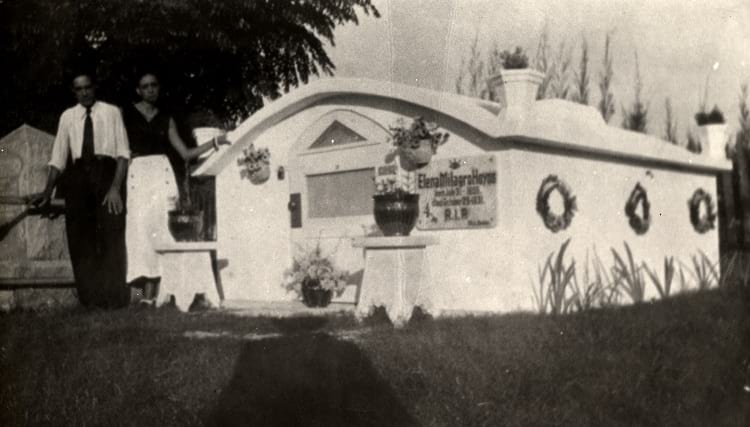 According to him, Elena’s ghost, who would come to him every night had asked him to take her away from the grave and marry her. A little after bringing Elena home, Tanzler called a friend and excitedly told him that his Elena had finally agreed to marry him. The friend knew of Elena’s passing away and thought Tanzler was joking. By this time, Elena’s body was fast decomposing and Tanzler got into the task of preserving her body.

He connected her bones with wire hangers to maintain her frame and replaced her eyes with glass eyes. He filled her abdominal cavity with rags and replaced her skin with silk covered with wax and plaster. He even covered her head with a wig made from her own hair that he had taken from her mother. He then dressed her up in a white dress and had a wedding ceremony for the two of them. He slept with Elena’s body every night and danced around the house with it. He sprayed the body regularly with disinfectants and perfumes to cover the foul decaying smell. He even went about buying expensive clothes and jewellery for Elena. 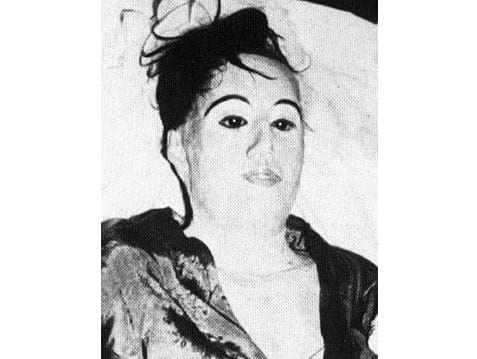 By this time, people had started noticing his suspicious behaviour. His absence from Elena’s mausoleum, his constant shopping sprees of women’s clothing and other items got people talking. One day, a local boy peeking in from his window, saw him dancing with a giant doll and word spread that Tanzler had probably stolen Elena’s body from the cemetery and got it home.

Sometime in October 1940, rumours reached Elena’s sister, Florinda, who went to Tanzler’s house to confront him and to her horror discovered her sister’s corpse. She informed the authorities who arrested Tanzler and put him on trial for “wantonly and maliciously destroying a grave and removing a body without authorization.” The press coverage gained Tanzler a lot of support from women who found his actions wildly romantic. 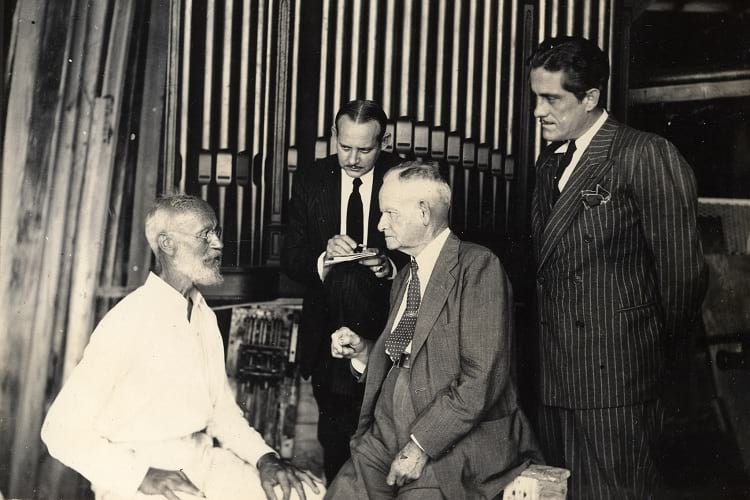 With all the media attention to the case and people wanting to see the preserved corpse, Elena’s body was publically displayed at a local funeral home and people were charged for their visit. Subsequently, Elena was quietly reburied in an unmarked grave to protect her from further tampering. During his trial, Tanzler also said that he had been building a spaceship in which he could take Elena’s body to outer space where the radiation would jolt her back to life. After a preliminary hearing on October 9, 1940, Tanzler had to be released with the charges relating to the case dropped, as “the statute of limitations for the crime had expired“. 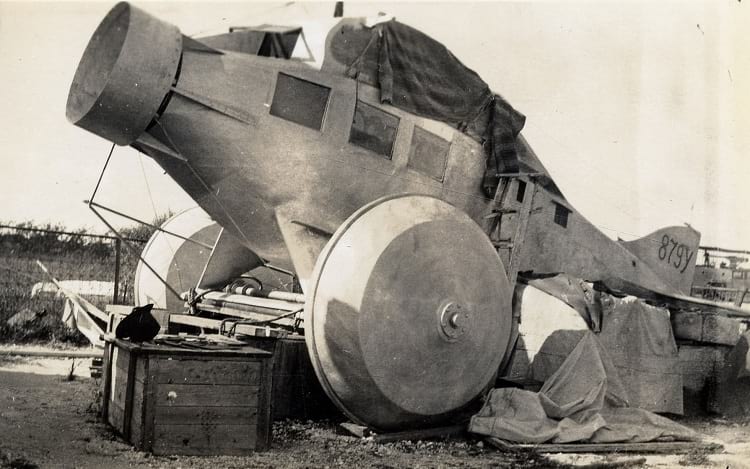 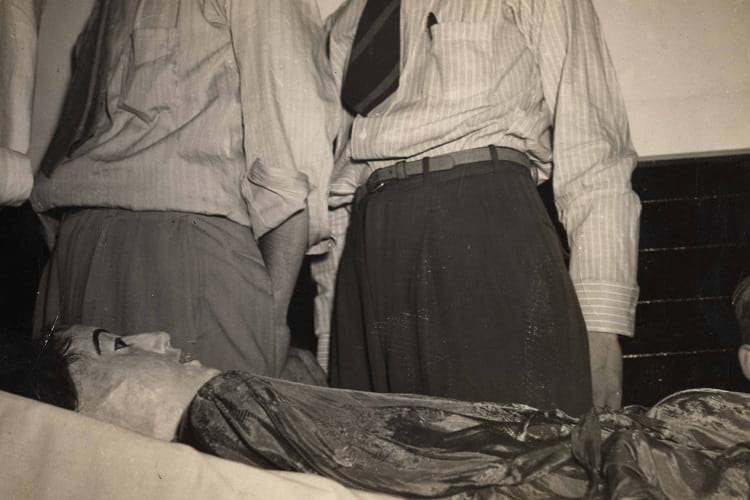 The body of Elena on display after being recovered. (Florida Keys–Public Libraries / Flickr)

His request to get Elena’s body back was denied and he returned to Zephyrhills in 1944 where he lived till he was found dead for 3 weeks in his home in July 1952. A full-size mannequin with Elena’s face constructed from a death mask was found in his home.

Enjoyed this article? Also, check out “In Tsarist Russia Members of the Secret Skoptsy Sect Believed in Self-Castration“.

Recommended Read:
Undying Love: The True Story of a Passion That Defied Death | By Ben Harrison

Previous Article
Super-Trains of the Past: Trains with Jet Engine
Next Article
Charles Osborne Had Hiccups For 68 Years and It Only Stopped Just Before He Died