Old Penn Station: A Colossal Railway Terminal That Was Once a Crown Jewel of New York’s Heritage 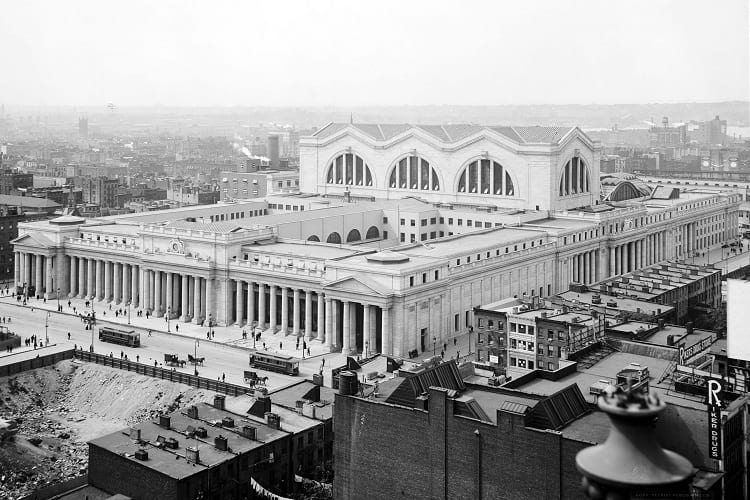 When the world first got to know that there would be vehicles that would carry a thousand commuters together at one time and that these vehicles would run on tracks instead of roads, it went into a tizzy. Almost every nation followed suit and the world was connected with railroad networks in no time. Soon enough each developed nation (of those times) tried to outdo the other by building railway terminals that would be better than the others. But when Pennsylvania Station in New York City in the United States of America was built between the years 1904 and 1910, it was not just a beautiful monument but it became a moment in history for everyone to hold on to.

Earlier until the twentieth century, the railway network of Pennsylvania Railroad, also known as PRR, ended on the western side of the Hudson River and commuters who had to travel further over to Manhattan had to take ferries to cross the Hudson. So PRR decided to construct a railway bridge across the river to ease the commute. But since the project had to be a joint venture between the railroad networks of the states of New York and New Jersey (since it connected both), the latter did not consider the option seriously. The PRR then looked to build a railway tunnel under the river instead, but the stringent laws of the state of New York did not allow steam engines to ply in enclosed spaces for fear of pollution and so the idea did not materialize sooner.

It was only in the year 1903 when the then PRR president Alexander Johnston Cassatt finalized the construction of the Parisian-style electric engine railroad approach to expand the railway network that a green signal was given to the project. Finally, in the year 1904, work on the new railroad expansion project took form and the railway terminal, which would go on to become a feat of engineering started taking shape. Designed by McKim, Mead and White, one of the highest-flying architectural firms in the US during that time, the Pennsylvania Station was built on a sprawling eight-acre piece of land and covered more territory than any other building ever constructed in the world then.

It covered the 31st and 33rd streets of Manhattan and was constructed in less than six years time. It followed the Roman and Greek Doric style of architecture and the entire length of the building was approximately 788 feet, which allowed for sidewalks on both sides of the street. The Pennsylvania Railroad bounded the Seventh and Eighth Avenues completely and its facades were built in a way that it patterned after the grand Caracalla baths and temples of ancient Roman civilization. The waiting room inside the station. (Library of Congress) 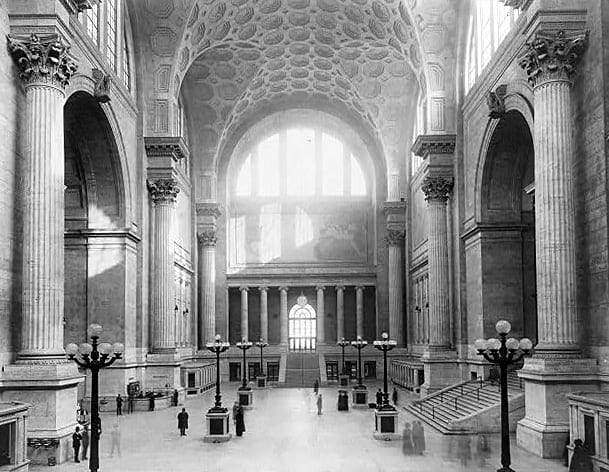 Photo of the waiting room from another angle. (Library of Congress)

Alexander Cassatt, who found inspiration in the Gare d’Orsay station on his visit to the French capital of Paris, wanted his New York Penn Station to be even bigger than the Beaux-Arts styled Parisian building. Working closely with Charles McKim of the McKim, Mead and White firm, Cassatt planned a huge building that would house three floors, have twenty-five tracks for trains and would measure a whopping 1,500 feet in length and 500 feet in width. PRR also proposed for a post office to be constructed across the railway station, which the US government considered with a positive outcome. Lands were purchased and work on one of the biggest railway stations began with excavations and construction starting in full swing.

Although the tunnel project began facing initial hiccups, with many laborers dying, working in extreme conditions and some physical damage to the tunnel, construction on the station building went on without halts. Finally, after all the efforts were put in, work on the enormous Pennsylvania Station was officially finished in August 1910 with all underground tunnels in place.

Two weeks later, on September 8, 1910, a part of the station was opened to the public on an experimental basis and in November the same year, the entire station was declared open and fully operational. Commuters, eager to take the new railroad, turned up in the thousands to try out the new railway network that would finally take them all the way across the Hudson in no time. The interior of the old Pennsylvania Station. (Library of Congress) 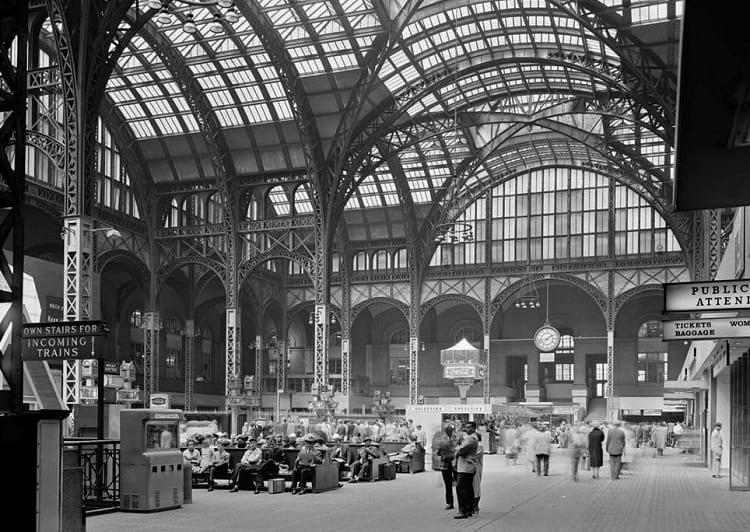 Description of the Penn Station

When work on the New York Pennsylvania Station was at its peak in 1908, it was considered a masterpiece that the city would look up to and talk about. The huge, arched glass windows, pink granite and marble columns adorned the building that was set to become one of the largest public spaces ever to be built. An engineering sensation, the Pennsylvania Station was constructed using roughly seventeen million bricks, 27,000 tonnes of steel, 83,000 square feet of skylights to allow daylight inside through the roof windows and some 500,000 cubic feet of coloured granite.

A part of the ceiling of the building was made using glass and wrought-iron and a 150-foot high waiting room could fit nearly three thousand people together at one time. Despite the glass roof, the waiting rooms underneath it were always brightly lit but never sunny. There were electronic ticket counters, a large information booth, small stores and restaurants packed in corners, murals decked the walls, cola vending machines were installed at regular intervals (which also led to free publicity), billboards and a few shopping arcades too were crammed inside some parts of the structure. The Old Penn Station Terminal not only served the commoners but also the privileged alike once it was fully functionally and running. While there was a surge in the flow of passengers to and fro from Penn Station after World War I ended, it sadly saw a decline after the Second World War came to a close and airplanes started to take to the skies.

By the year 1947, the numbers went down drastically and it became difficult to maintain the grand building, which was already running into financial losses. Add to the woes, the Pennsylvania Railroad gave away the air rights to real estate developers. It was then decided to tear down the great building. 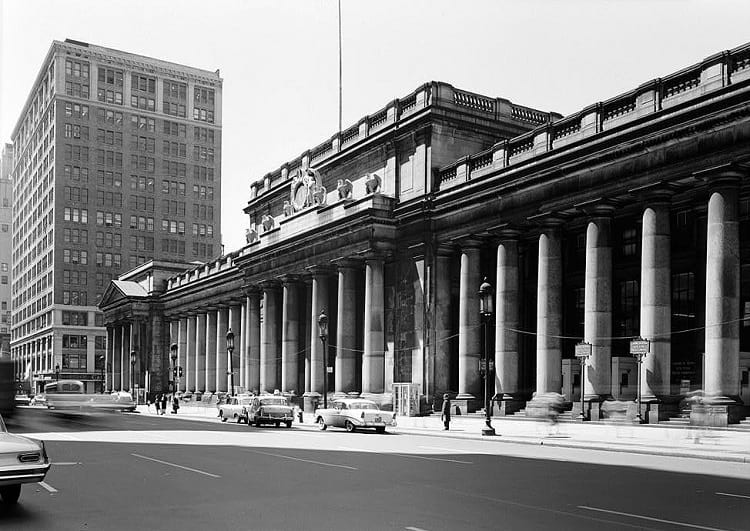 In 1962, Irving Felt of the Graham-Paige automobile company purchased the air rights and planned to construct the present-day Madison Square Garden and Penn Plaza at the very place Penn Station once stood overlooking the busy streets. However, the railway network underneath the surface along with the tunnels beneath them were agreed to be left functional and operational. There were large public opposition rallies, international outrage and protests from all walks of life to save the building that became a part of the American heritage, but it was to no avail. Finally, in October 1963, when the first wrecking ball hit the building hard, it was clear that the structure would be taken down eventually.

Even though the New York Penn Station was demolished to make way for the multi-purpose indoor sports arena and the hotels and offices of Penn Plaza, it largely helped in preventing other heritage buildings from biting the dust. The Grand Central Terminal was also about to fall as there was a proposal to demolish it too, but the timely passing of the landmark preservation act – New York City Landmarks Preservation Commission of 1965 – helped other buildings see the future. The commission had come at a great cost but it was too late; and one of the most beautiful train terminals from the past had already ceased to exist by then.

All a part of history now, only the photographs of the mighty Penn Station remain that still adorn the walls of the train tunnels. The New York Pennsylvania Station was once a work of art, a stunning engineering marvel that also made its way into movies and people cherished it for five decades and always felt important while riding the railways beneath it.

Previous Article
Burke and Hare: Two Body Snatching Serial Killers Who Sold Corpses for Anatomical Science
Next Article
What is a Micronation? and Some of the Most Popular Micronations in the World