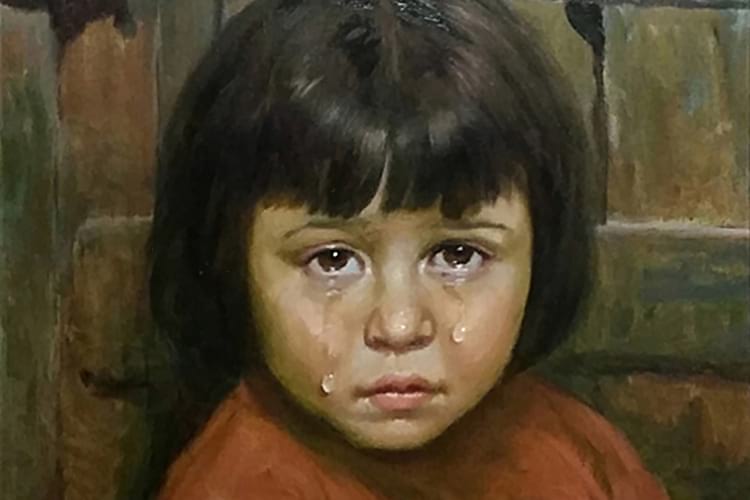 The Crying Boy was a series of paintings of tearful boys, painted by an Italian artist, Giovanni Bragolin who was also known as Bruno Amadi. It is alleged that various altered versions of The Crying Boy Painting were distributed during the 1950’s and the years that followed by. It is also believed that there is a jinx related to this painting.

According to an urban legend, the artist fled to Spain after the orphanage he painted was gutted in a mysterious fire. He worked in a post-second world war Venice and used to churn out paintings of crying boys for the tourists there. Amadio, under the name of Giovanni, painted as many as 65 children, boys with teary eyes, looking straight. These paintings highly influenced people and touched them.

The year was 1985, when disturbing news related to the paintings, spread like fire. Daily newspaper The Sun had printed a piece on the painting titled, ‘Blazing Curse of the Crying Boy’. It was regarding a house fire in Rotherham (a town in England) of a couple, Ron and May Hall a town in England. The blazing fire brought down their house, which originated from an unattended frying pan catching fire.

Everything in the house was destroyed. But only one item survived, it was a painting of the crying boy that fell, face down, and was slightly charred. The report also talked about how in the area, this was not the first instance. In many of the fires in the neighbourhood, despite everything burning down, the only piece that survived in the household was a copy of this Crying Boy painting.

Things started getting weirder when the report suggested that the fire-fighters thought the painting to be cursed and The Sun’s wide audience agreeing to it. Alan Wilkinson, a fire station officer, had reportedly logged as many as 50 fires where the Crying Boy Painting was found. People started associating the fires with the curse of the Crying Boy painting.

Public panic became real. Finally, after another big fire that occurred at an Italian restaurant, the publication requested its readers to send in their Crying Boy paintings to the office. They organised a mass bonfire of the paintings, which at first were hard to burn but later succumbed to it. Another interesting story around the Crying Boy painting is that of the boy in the painting, itself. It is believed that his name was Don Bonillo, an orphan whom Amadio had adopted. But the child, who was mute, was believed to be cursed and was called the devil child as he had seen the death of his parents in a house fire which happened during the Second World War. The local priest had warned against adopting him, but Amadio didn’t listen. They lived happily together. But one day, his studio and apartment both caught fire. Amadio then blamed Don for it and threw him out of his house. Years later, during 1976, a report about a car crash and a burnt body caught attention. It is believed that the body had burnt beyond recognition. In the glove compartment of the car, the driver license – which was not destroyed in the car’s fire – read Don Bonillo. After the mass bonfires, the stories of the cursed fires started waning. But till date, the curse was neither proven nor denied.

Were the paintings really cursed?

Years later, Steve Punt a noted comedian and actor investigated the case of the crying boy painting and the curse related to it. The investigations were carried out on a show called Punt PI. Though the show had a comic outline, Punt certainly reached a conclusion which was followed by investigations at the Building Research Establishment. It was concluded that the prints were put through a fire retardant. It was further revealed that the painting would fall down with the face on the floor due to fact that the thread holding the painting, that would burn first in case of a fire. This would have thus protected the painting.

Enjoyed this article? Also, check out “The Hands Resist Him: A Haunted Painting that Spooked the Virtual World for Decades“.

Previous Article
Seppuku: The Japanese Suicide Ritual, Where Death is Better Than Disgrace
Next Article
Super-Trains of the Past: Trains with Jet Engine