Voynich Manuscript: An Enduring, Undecipherable Mystery of the Literary World The Voynich Manuscript is one of the mysteries of the world that continues to baffle everyone. Written sometime in the 15th century – carbon dating carried out in 2009 points to a period between 1404 and 1438 – it is perhaps one of the most well-known books in the world that nobody has ever read. For the simple reason that nobody has so far been able to make head or tail of its strange, written script.

It is a script like no other and does not match anything in any of the multiple languages that human beings around the world once used and still use. Several high-profile and highly-qualified linguists and cryptologists have tried to decipher the script over the years and all of them have, so far, failed in their attempts. In more recent times, researchers have tried to crack the code using artificial intelligence, but that hasn’t produced anything convincing either.

Origins of the Voynich Manuscript

The truth of the matter is that nobody even knows who wrote the book in the first place. Some sources attribute its authorship to Roger Bacon, the multifaceted genius of Elizabethan England, who seemed to know something about much of the available knowledge of the period. Moreover, he was a dab hand at codes and cryptology. There is, however, no definite evidence pointing to him.

In any case, somebody wrote the Voynich Manuscript and in quite a beautiful hand too, with a quill pen, with seemingly no errors or mistakes in the transcription. This indicates that the person probably copied it entirely from another written manuscript and the copier was an expert scribe, who understood the script he was writing.

Over the ages, the book has passed through several ownerships. According to one of the stories circulating about this book, King Rudolf II of Bohemia once owned the Voynich Manuscript. In 1639, the book was in the hands of a certain Georgius Barchius of Prague. Since he was unable to read the script, he wrote to Athanasius Kircher, a Jesuit in Rome and one of the leading cryptologists of the period, and apparently sent him some facsimiles of the pages, while refusing to part with the actual volume.

After Barchius’s death, his friend Johannes Marcus Marci, a physician and scientist from Prague, inherited the book and he eventually sent it to Athanasius Kircher, with whom he had corresponded for 25 years. Kircher, however, had no luck with deciphering the manuscript either. 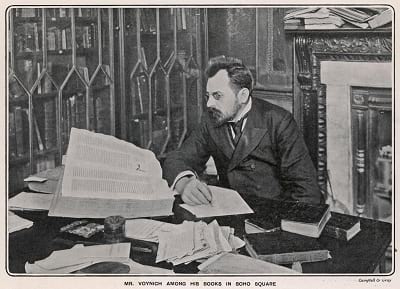 In 1912, Wilfrid Voynich, a Polish book dealer, bought the book along with several other antique books, and, since he made it publicly prominent, we now know of the book as the Voynich Manuscript. It was, he said, an oddly plain volume that stood out in a collection of illuminated manuscripts that he discovered in ancient chests in a Southern European castle. The cipher script, the calligraphy, and the illustrations intrigued Voynich, and he assumed it was a ‘natural encyclopaedia.’ He took it with him first to the UK and then to the USA. To have the script deciphered, he had many experts examine it.

There was a stir in 1919 when William Romaine Newbold declared he had managed to translate part of the text, but, in 1931, John M. Manly debunked this claim, and further attempts in the 1940s and the 1960s came to naught. The mystery of the Voynich Manuscript remained a mystery.

P. Kraus, an antiquarian, bought the book for $24,500 in 1961, hoping to sell it for a profit. Not finding any buyers, however, he donated it to Yale University’s Beinecke Rare Book and Manuscript Library. Here it remains to this present day.

Features of the manuscript

The text runs from left to right and has several sections and paragraphs dividing it. These have pen and ink and watercolour illustrations interspersing them. Some of the pages are text only, while others have text and illustrations. Some of the pages fold double. The pages are of calfskin vellum, some with differing thicknesses, and were new when first written upon. The goatskin cover, which binds the pages, has a much later date and is a later addition. The cover is blank, without any title or author inscription.

Since the text is indecipherable, researchers have tried to come up with tentative ideas about the content from the illustrations. Since illustrations of a similar kind appear together in sections, researchers give the sections as herbal/botanical, astronomical, cosmological, biological, pharmaceutical, and culinary/recipes.

The illustrations are in ink and painted with watercolour. There are illustrations of plants, cell structures, gadgets, alchemy equipment, nude women seated in pipe-connected pools and containers, zodiac signs, astrology, comets, galaxies, and even dragons.

Researchers have been able to identify only a few of the plants in the botanical drawings. Some, they claim, are from the New World. Some plant drawings look like combinations of different plants, using the roots of one, the stems of another, and the leaves of yet another. In brief, made-plants that don’t actually exist. 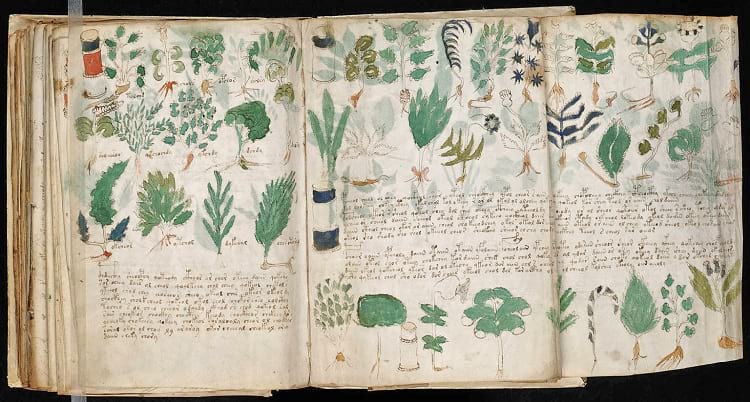 The images of women wearing crowns and seated in pools and containers are also puzzling.

Real or an elaborate hoax?

One researcher claimed that the writing wasn’t so much code as abbreviation and abbreviation of medical terminology at that. The book was about gynaecology and women’s health and its author plagiarised much of it from other medical texts of the period. This version sounds plausible, but other scholars have found inconsistencies and errors with it.

It is a complicated code that, unfortunately, does not have a key or a clue to solving it.

It is an artificial, contrived language.

It is a meaningless hoax, created to gull people for money.

It is a message from the Martians. This may seem far-out, but, in 1896, there was a woman named Helene Smith, who called herself and claimed to have had telepathic conversations with Martians and even wrote down their strange Martian script. Of course, nobody knows how true this is and the Martians don’t appear to have contacted anybody else ever since.

Researchers have tried to use linguistic rules from various languages to make some sense of the Voynich script, but that, again, has not worked out.

The Voynich manuscript continues to defy all decryption.

Since the Berenich Collection has completely digitized the Voynich manuscript, people around the world can now visit their website and view it in its entirety. The efforts to crack the code continue.

View the complete book at archive.org.