Maharajas’ Express: An Ultra-Luxury Indian Train That Redefines the Experience of Travelling 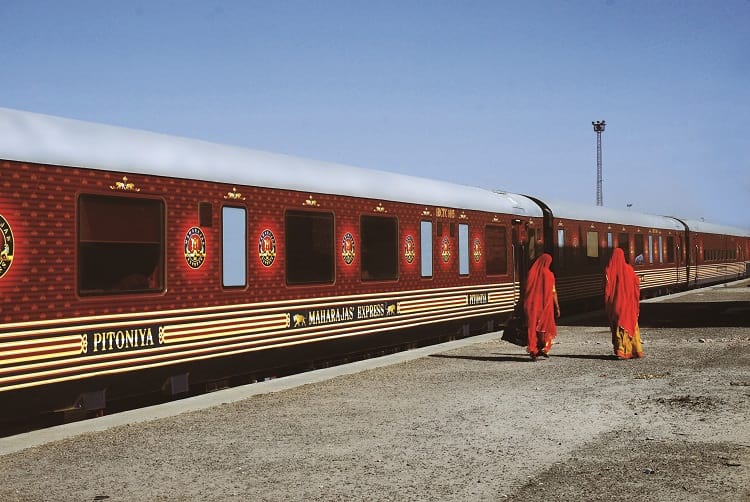 Train journeys have always held a special place in the heart of people, giving them fond memories to recount. Travelling across villages and cities and watching the lush green countryside and colourful cityscapes roll by, is an exceptional experience for travelers all over the world. But Indian Railways’ Maharajas’ Express is one luxury train that literally goes the extra mile to make sure its patrons have a royal experience of a lifetime on their trip, as the express makes its way through more than twelve choicest destinations in the country.

A joint venture between the public-private organizations of Indian Railway Catering and Tourism Corporation Limited (IRCTC) and Cox and Kings India Ltd. respectively, Maharajas’ Express was started in the year 2010 with a view to boost tourism in North India. The two corporations signed a deal and set up a new company called Royale Indian Rail Tours Ltd., which was to supervise the entire management of Maharajas’ Express. But few months into the partnership and the companies were already running into financial losses, for the business was not very lucrative in its initial days. Cox and Kings India Ltd. had invested a huge sum of money into the venture, while IRCTC claimed that it could bring in more profits if it was given the upper hand in the management duties. This led to a dispute between the two parties and the matter was taken to court. Following the Supreme Court orders, it was finally decided that IRCTC would take full charge of the operations of Maharajas’ Express alone and with lowered prices, it would offer the same services as it had promised initially. The contract between the two companies was then terminated a year later in 2011. Ever since, IRCTC took over the operations of Maharajas’ Express and is now being managed exclusively by the Indian Railways, becoming the most expensive luxury train in the world.

Depending on the itinerary, the Maharajas’ Express covers several destinations in the country, mostly traversing the northern part of India, centering on Rajasthan. The best part about this train travel is that it allows a traveler to enjoy a royal experience only on wheels. The express generally starts its journey at night and travels to places mentioned on the tour package in a span of nine days at a maximum, which is part of its longer route. The shorter trip package includes only a three-day tour on board the luxury train. Although the train travels through several routes, the one that passengers enjoy the most, not only from India but also from foreign lands, is called the Princely India, wherein the express train journeys through the major cities of the state of Rajasthan. The package called Indian Panorama includes a tour of the country’s breathtakingly beautiful landscapes starting from Delhi and covering Rajasthan’s Jaipur and Ranthambore and going all the way from Fatehpur Sikri to Varanasi, Lucknow, Agra, Khajuraho and Gwalior. Another route called The Indian Splendour journeys from Delhi and covers Udaipur, Bikaner, Jodhpur and Mumbai, along with Agra, Jaipur and Ranthambore. Other itineraries, which cover almost the same cities, are called The Heritage of India, The Indian Panorama, Treasures of India and Gems of India.

With a total of twenty-three luxury coaches, the Maharajas’ Express offers four categories of cabins, including a Presidential Suite, a Junior Suite, a Suite and a Deluxe Cabin. All the coaches are named after precious stones like Heera (diamond), Moti (pearl), Panna (emerald), Pukhraj (topaz), Neelam (sapphire), Firoza (turquoise) etc. The artfully crafted coaches and thematic décor complement the ambience inside each luxurious cabin. Even the details in every cabin, including its color, are such that they match the royal theme perfectly. The Presidential Suite is elegant and very richly decorated, with space enough for two bedrooms and a grand living room too. Out of the twenty-three coaches, one is reserved entirely for the staff and members of the management, which also has a travelling doctor on board in case of any emergency during the course of the journey. One coach can carry at least eighty-eight passengers travelling together. 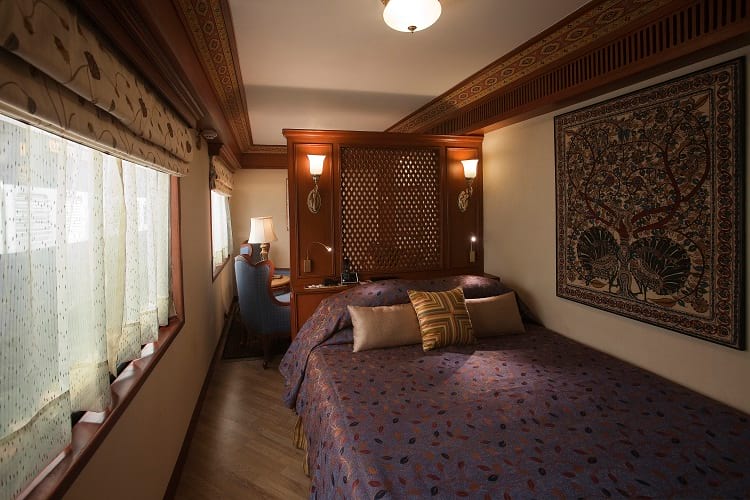 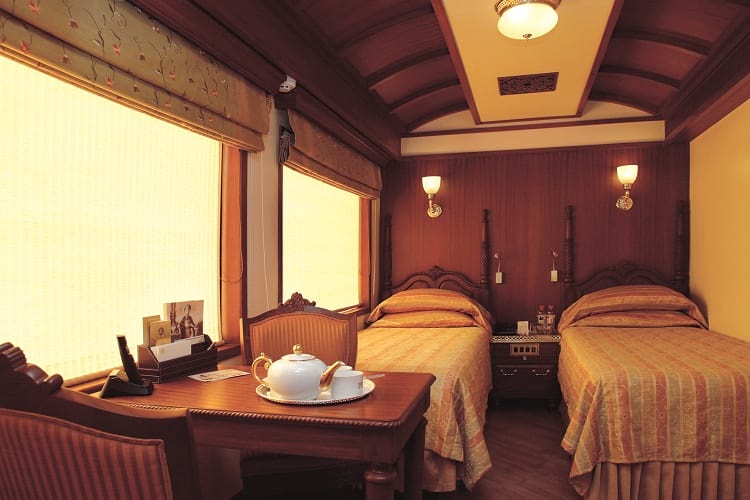 Amenities inside the Maharajas’ Express

Each cabin measures around 112 square feet and has room enough for a double bed, a foldable writing desk and a luggage storage space underneath the bed, a wardrobe, an electronic safe for personal belongings and an air conditioner. The lavish interiors also have a smoke detection system, CCTV cameras and pneumatic suspension for a smoother journey. The state-of-the-art cabin also provides a plasma television set that plays satellite channels, Wi-Fi facilities, carpeted floors and climate control system to make the journey more memorable. The luxury bathroom in each suite is well-equipped and has a shower cubicle, an elegant bathtub, a water closet and a wash basin with a continuous supply of hot and cold water as per the need. The twenty-four hour valet answers to guests’ calls whenever made. 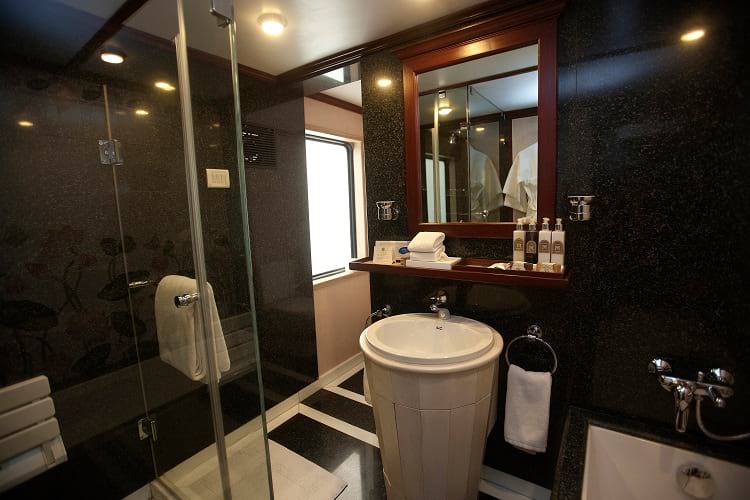 A bathroom from one of the suite. (Simon Pielow / Flickr)

The coaches also have boutiques, bars and restaurants, which offer nothing less than a five-star dining experience on wheels. The plush lounge bar called The Rajah Club offers an exquisite range of drinks for its patrons. It also offers games tables for a more entertaining and relaxed trip. Comfortable seating arrangements in this luxury lounge, along with corporate bars for meetings on board are also included in the list of amenities on the Maharajas’ Express. 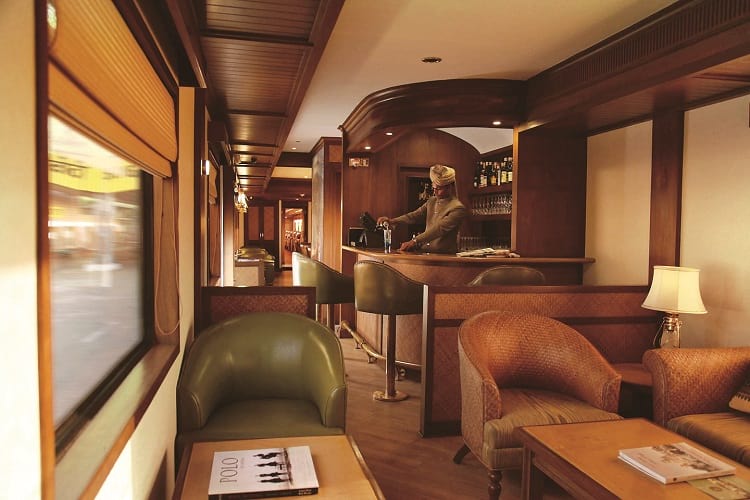 A well-equipped kitchen offers an eclectic mix of meals ranging from Indian cuisine to Western dishes. Two restaurants called Mayur Mahal and Rang Mahal offer seating capacities for forty-two guests at a time and serve food from an international platter. All onboard meals are served in the two eateries. Expensive cutlery and tableware adorn each dining table for a more fine dining experience. 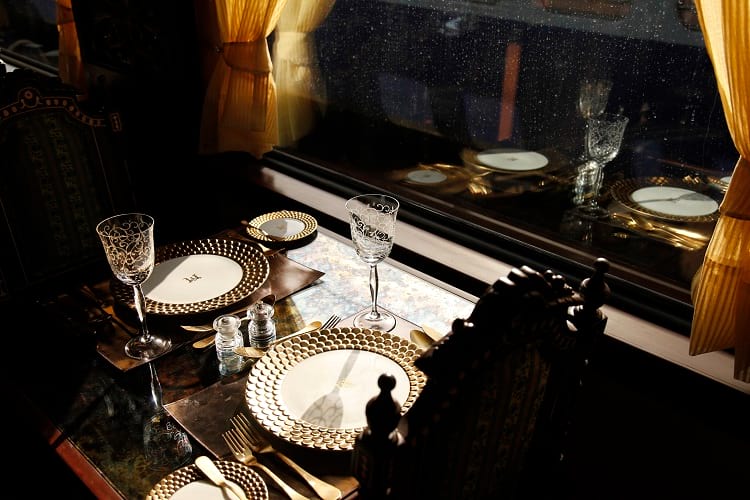 While in service since the last nine years, the Maharajas’ Express has added quite a lot of feathers to its already brimming cap. It has been consecutively voted The World’s Leading Luxury Train for five times between the years 2012 to 2017 at the World Travel Awards held in different countries. It won the CNBC Travel Awards in the years 2015 and 2010, and was also adjudged winner of the Seven Stars’ Luxury Hospitality and Lifestyle award in the years 2016 and 2015. It was the first runner-up at the Conde Nast Travellers Readers’ Choice Award in the year 2011 among other recognitions that it has earned since its inception.

The Indian luxury train that charges a whopping fare for a week-long journey to world heritage sites in the country, offering several facilities akin to a stay at an opulent hotel is what makes its tour even more special. Providing a world-class travel experience on wheels, the royal journey on Maharajas’ Express is definitely a once-in-a-lifetime tour one can ever undertake.

Enjoyed this article? Also, check out “The Idea Behind the Rotary Snowplow Train was Conceptualised by a Dentist“.

Special thanks to Simon Pielow, co-founder of The Luxury Train Club for releasing the above images under creative commons.

Previous Article
From Textiles to Mercedes, Tata Motors Have Come a Long Way
Next Article
Sedlec Ossuary: The Famous Bone Church of Kutná Hora in the Czech Republic