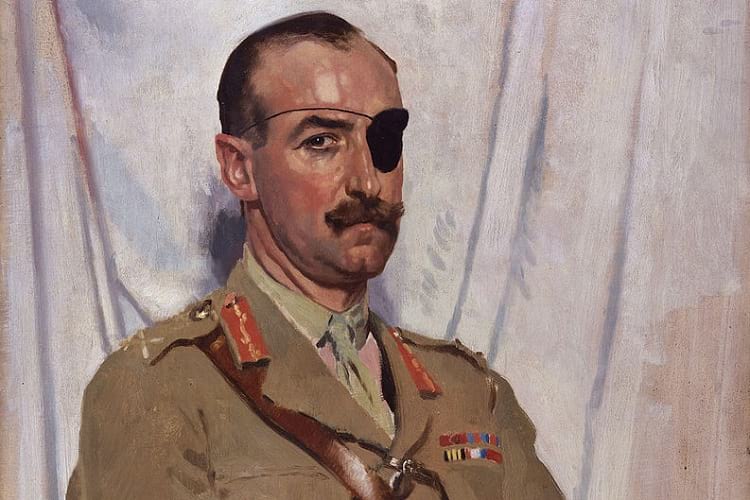 If you were born into a Belgian aristocratic family how would you spend your life? Would you spend it fighting in three different wars over the span of 50 years, or live a life of luxury? For most of us, the answer to that question would be a life of luxury, unless you are Adrian Carton de Wiart. Sir Adrian Paul Ghislain Carton de Wiart VC, KBE, CB, CMG, DSO was one of the most decorated British Army officers, telling of whose war exploits would require the greats like Tarantino, Scorsese, and Nolan to come together to do any justice to his biopic.

The man had sustained serious injuries a total of 11 times over his military career, losing an arm and an eye in the process. And that doesn’t even start to scratch the surface of his adventurous life.

Born in 1880 in Brussels, to a Belgian father and an Irish mother, Sir Adrian spent most of his youth at a Catholic boarding school in England. He then enrolled at Balliol College, Oxford. For most people war is a way of resolving disputes or just a display of power, but for some it is recreation. Sir Adrian was one of those people. At the age of 19, Sir Adrian joined the army by lying about his age and his name. He claimed to be a 25-year-old drifter named ‘Trooper Carton‘.

Starting his professional life as a soldier in the Second Boer War, he injured his stomach and groin very early on, while fighting in South Africa. Because of his injuries, he was invalided home where he was met by his infuriated father, who was still unaware of his son leaving college to join the army. Sticking to doing what he loved, Sir Adrian went back to South Africa once his wounds had healed.

He was very concerned about his physical fitness, and therefore he regularly ran, jogged and played sports. Among his peers, he was known to be charming, delightful but a foul-mouthed man.

A very well-connected man in Europe, Sir Adrian spent his time away from work travelling extensively. He made friends with quite a few people in high places. Till the beginning of the First World War, like most army officers of imperial England, he was stationed at a number of places including India.

During WWI, he was assigned to the Camel Corps in British Somaliland to establish his control over the followers of Mohammed bin Abdullah. He lost his left eye after being shot in the face when they attacked an enemy fort. But losing an eye did not dampen his spirits because he probably liked how he looked with an eyepatch. He was then given the chance to lead his own infantry battalion into battle in the bloody trenches of the Western Front. Here he lost his left arm after taking some shrapnel. When doctors refused to amputate some infected fingers, he did the deed himself.

Then he was shot in the skull for the second time in the Battle of Somme along with his ankle. But his gallantry there was awarded in the form of the Victoria’s Cross – the highest military honour in England. He was wounded 8 times during the First World War, and six times he injured himself serious enough to be granted mentions in dispatches. While for most of us this feels like a horror of the third kind, he later wrote in his autobiography Happy Odyssey: “Frankly, I enjoyed the war; it had given me many bad moments, lots of good ones, plenty of excitement and with everything found for us”. Photo of Sir Adrian, when he was lieutenant colonel during the Great War. (Henry Walter Barnett / IWM)

After the First World War, he was sent to Poland as a representative of the British Government. Poland gave him an estate near the borders where he spent most of his time hunting. After the Nazi invasion of Poland, he had to return to England. Even at the age of 60, he led an operation to halt the advancing Nazi invasion of the Norwegian city of Trondheim.

Possibly the most interesting part of his story is when his plane crashed off the coast of Italian-colonized Libya. He swam to the coast where he was captured by the Italian army and sent to a prisoner camp in Italy. He tried to escape the camp five times, once evading and being captured for eight days disguising as a local despite his eyepatch and lack of any knowledge of the Italian language. He was released in 1943 and sent to England with the message of Italian surrender.

Winston Churchill, the prime minister of Britain, had fought beside him and also wrote the foreword to his Autobiography. Churchill sent him to China as a special representative where he befriended Chiang Kai-Shek and helped him fight the Japanese. It is also said that at a dinner party in China he had been very rude to Mao Tse-Tung. He retired from the Army in 1947, after fighting in 3 wars and injuring himself 11 times. He lived on till he was 83 years old, passing away in 1963. Sir Adrian (at the back row) and other participants of Cairo conference in 1943. (U.S. Government) We have talked a lot about his adventurous life as a soldier, but his personal life was not ordinary either. He was married to an Austrian Countess, Countess Friederike Maria Karoline Henriette Rosa Sabina Franziska Fugger von Babenhausen for 41 years, and she didn’t even get a mention in his autobiography. We cannot blame him considering how interesting his life had been, one could easily forget about his Countess wife of 41 years.

Having an unkillable soldier like Sir Adrian on your team would really help an army win a war. We cannot give him the whole credit of winning the World Wars, but a man like him deserves more than just a few medals.

Previous Article
Sky Burial: The Ritual of Feeding the Dead to the Vultures
Next Article
Life Inside Oymyakon, Where Eyelashes Freeze