Sky Burial: The Ritual of Feeding the Dead to the Vultures 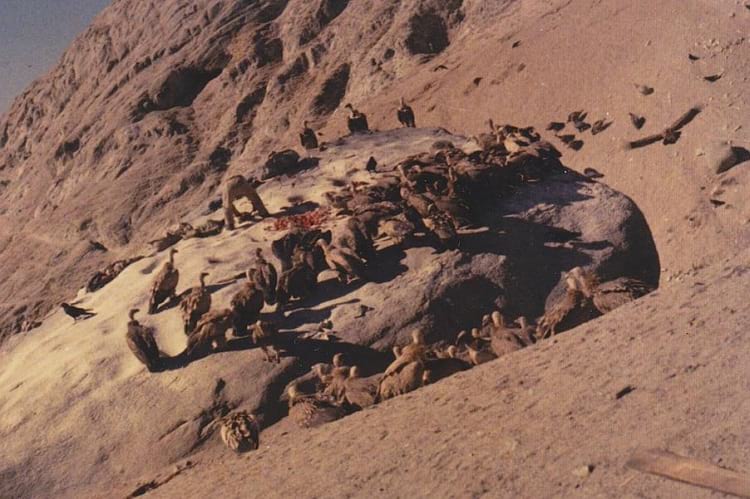 How would you like to be disposed of when you die? For many people in Asia, they will be left atop a mountain, to become food for vultures. This is a form of excarnation – common in many ancient societies – where the flesh and organs of the deceased are left for the birds and other carrion seeking animals. It is practiced in various Chinese provinces such as Inner Mongolia, the beautiful region of Sichuan and autonomous regions like Tibet and also, in some parts of India.

It comes from a long-serving tradition of Buddhism and in particular Vajrayana Buddhism which believes it to be a form of spiritual transmigration, the soul exiting the body. In other words, there is no need to preserve the body in any way because the soul has already left. This is only the case if undertook within a sacred Charnel ground.

Sky burials may sound barbaric to western ears but the fact is that it is a practical way of doing things. Releasing the body back to nature is a courtesy held in high regard in many of these cultures. The vultures that claim the flesh are known as Sky Dancers (‘Dakinis’) to many. They are seen as spirits, even forms of angels to many. The history of Sky Burials is estimated to date as far back as 11,000 years ago. However, the evidence is still not concrete on that. Archaeological findings from Göbekli Tepe in Turkey in the form of pillars seem to show the ritual. More concise findings take it before the inception of Buddhism which is between 6-4th Century BCE.

More recently, the first written mention of it comes from the 12th century – Book of the Dead – which includes procedures from a lama, a burial master charged with preparing the bodies and making the rituals. Towards modern times, however, Sky Burials are dropping in number. Many regions had the practice outlawed such as in communist times when the Chinese and Mongolian governments closed many temples. Communism is inherently atheist and considered it to be outdated. From 1960 to 1980 it was banned during the Chinese cultural revolution. This coincided with urban expansion causing the decline in vulture population also.

Although it sounds a harrowing end, the victims are treated with the utmost respect beforehand. As is the generous mantra of Buddhism the bodies are disposed of in such a grandiose manner in order to help as many others as possible. As mentioned the burials are practical: It is near impossible to dig holes in many of these arid regions. Also, it is not affordable to attain flammable materials to burn the dead.

The Burial Masters act as the undertaker and will keep the cadaver at the homestead of the deceased, covered in white cloth for 3-5 days before taken to the site of burials. They will burn items like Juniper incense to attract the vultures and some limbs may be divided for a cleaner kill if necessary. When only the bones are left they will be broken down by mallets and ground with Tsampa, a staple food for Tibetans, made of barley flour. Those remnants will become crow feed after the biggest birds depart. Otherwise, the bones will be buried.

In some cases, wild dogs will scavenge what the Dakinis leave. The birds play a big part in this ritual owning to the fact that if a lot of body remains untouched then the person has shamed in life or that the correct ritual conditions were not met.

Every Sky Burial is encouraged to be carried out in a jovial manner. Unlike many western cultures, it is not seen to be a sad occasion when someone dies. Based on the Buddhist doctrine of reincarnation – when the soul leaves the body at the point of death – the acceptance of our passing is to be met with an open mind and without fear.

A famous site which specializes in these practices is a Buddhist monastery called Drigung Thil in Tibet, 150 KM from the city of Lhasa. It became a touristic center with many visitors coming to experience a Sky Burial first hand. The monks later banned tourists as it is seen as bad karma for strangers to witness a burial. It must be mentioned that Sky Burials are not the only way to dispose of the dead with cremation and water burials also carried out in these regions. Sky Burials, however, are certainly the most dramatic and fascinating.

Enjoyed this article? Also, check out “Tower of Silence: Where Zoroastrians Leave their Dead to be Excarnated by Scavenging Birds”.