The Story of The Most Inspiring Football Match in History: Christmas Truce of World War I 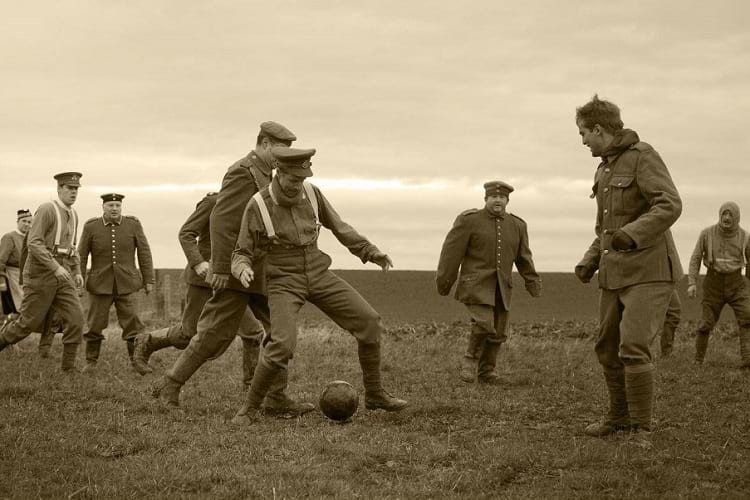 War is deadly. It brings destruction and despair. It maims the population, slaughters the army and crumbles the government. The New York Times has reported that “Of the past 3,400 years, humans have been entirely at peace for 268 of them, or just 8 percent of recorded history.” According to estimates, throughout the course of human history, war has taken a toll on the life of about 1 billion people. In fact, in the last century itself, a minimum of 108 million people lost their lives due to war.

When we visualise about a war scene, thoughts about bullets, blood, and hatred are the first set of things to enter our mind. But for a minute, imagine two rival armies coming out of their trenches to play football and celebrate Christmas together in the middle of the battlefield. This is the inspiring true story of the Christmas Truce of World War I.

The Christmas truce of World War I

During the winter of 1914, the war was in its early stages. During the war, trenches became the lifeline of the soldiers, they protected the soldiers from artillery and enemy fire. By the November of 1914, a very long network of trenches had been laid. On both sides, the armies took defensive positions. The war had evolved in a tedious manner and it was commonly believed that the war would come to an end by the Christmas and the soldiers would return home.

However, things turned out to be different. It was Christmas Eve and the soldiers were still stuck in muddy trenches, there was no news of a trip to ‘home’. As dusk fell, it started snowing. The sight was magical. The British headquarters received a baffling message around 8:30 P.M., “Germans have illuminated their trenches, are singing songs and wishing us a Happy Xmas. Compliments are being exchanged but am nevertheless taking all military precautions.” As the trenches were often closely located, one side could easily hear the other. Throughout the starry night, both sides continued to entertain each other with Christmas carols. The German “Silent Night” met with the melodious British “The First Noel.” Not a single shot was fired that night.

At the break of dawn, they exchanged greetings however, both sides were still sceptical of the each other. Expecting a treachery, men on both the sides kept their hands glued to their guns. However, eventually, the feeling of betrayal gave way to trust and officers from both sides emerged and crossed the parapet of barbed wires that had been separating them and met in no man’s land. Not sure of what to do, they started to shake hands and exchange greetings.

Soon enough, the area of few yards between the trenches was filled with hundreds of ‘alive’ soldiers shaking hands with the men they were sent to kill. They exchanged small gifts such as uniform buttons, caps and food items. Men from both sides brought mugs and started to drink rum and smoke tobacco, celebrating Christmas. Not only this, they made arrangements to mutually bury their deads. Someone from the British side had received a football as a Christmas gift, soon a match kicked off. It was far from a professional football match, it was more of a bunch of war veterans kicking the ball around.

Mr. Felstead, the last known survivor of the Christmas truce retrospects to tell The Economist, “There could have been 50 on each side for all I know. I played because I really liked football. I don’t know how long it lasted, probably half an hour.” Nevertheless, the Germans have been reported to beat the British by a score of 3-2 in the match that took place that day. The men were exhausted by the humid conditions, still, they played their hearts out. Perhaps they knew that most of them wouldn’t live to recall this beautiful moment. The men seemed to have found a moment of peace and tranquillity amidst of the war that they might not get out alive of. 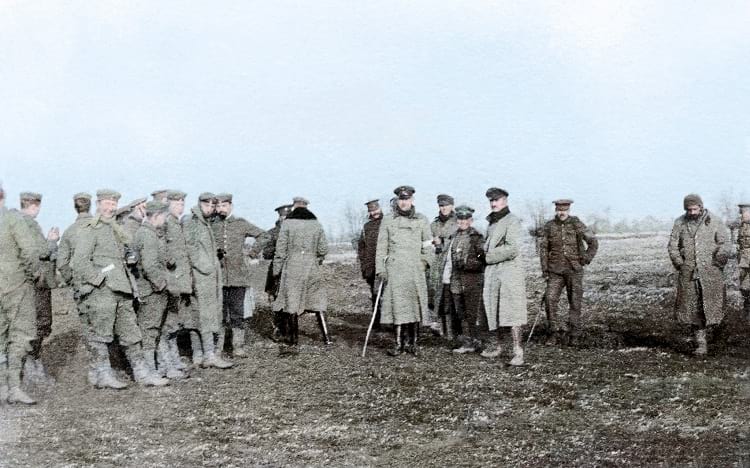 A colourized photo of British and German troops meeting in the no man’s land. (Cassowary Colorizations / Flickr)

But, soon the harsh realities of war made them return to their trenches and fight the men that they befriend a few moments ago. However, the message of the truce was out and widespread. The authorities from both the sides took stringent measures to make sure that there is no truce. War went on for 3 more years just to claim lives of about 38 million innocent people and soldiers.

Regardless of the fact that the Christmas truce was a mass mobilized event, it was not uniform. The truce was something that took place “scattered along a fairly small area of the front line” says Taff Gillingham. It was not just a single event, rather a series of events along the front line. A few casualties were reported on that day. Soldiers were shot by their enemies who didn’t anticipate a truce. The most reliable record of this recreation is available for the Royal Warwickshire Regiment which was posted in Flanders, near to the French border.

The spot is marked by a wooden cross and makes a popular tourist location. Another ‘Christmas Truce’ memorial was inaugurated on 12 of December 2014 by the Duke of Cambridge. It has been named as the “Football Remembers Memorial.”

No one knows everything about the Christmas truce and everything known is mostly from personal records such as diaries, letter, and oral testimonials and cannot be easily accepted without scrutiny. This blurred story continues to remind the world the tryst with peace between Germans and British soldiers during the dark hours of World War I.