The Bizarre Yet Wonderful History of San Francisco’s Cliff House

Cliff House, a legendary and infinitely renowned restaurant stands proud and lofty in northwest San Francisco, California inside a sprawling 160-acre arena of the Golden Gate National Recreation Area. For over one hundred and fifty years the restaurant has been in and out of business in an intermittent and bizarre manner.

In the year 1863, Senator John Buckley and C. C. Butler built the first Cliff House. However, certain anecdotal evidence also speaks about Samuel Brannan, a wealthy American businessman as the original builder of Cliff house who constructed it in 1858. In the beginning, because of its disadvantageous location on the craggy, rock-strewn hills of the Lands End that opened out over the Pacific Ocean, it was becoming very expensive to reach there. Owing to the difficult journey Cliff House was kept isolated for a long time. To address this problem a toll road “Point Lobos Avenue” was constructed till the Ocean Beach, which facilitated in bringing visitors from San Francisco with the help of a stagecoach.

Soon Cliff House became the regular exclusive haunt of the super-rich and the affluent like the Stanfords, the Hearsts and sundry well-to-do families who could afford to pay a round-trip fare of $1 and thoroughly enjoy the views, the oysters and the champagne.

After a decade of a prolific successful run amongst the rich and the famous, the resort started failing in business. To attract new patrons, the management permitted intake of alcohol and the practice of gambling. During this time, Golden Gate Park also opened and so did many public roads that lead straight to the beach. Photo of the first cliff house from another angle, circa 1868. (Carleton E. Watkins / LACMA)

With the influx of new customers, a sizeable number of them being from the working class, the destination gradually started losing its calibre and upmarket lustre. By the end of the 1870s, the once decent and reputable Cliff House was considered to be no longer a respectable destination resort.

Adolph Sutro, a mining engineer and philanthropist, who eventually became the Mayor of San Francisco, bought the Cliff House resort in 1883. With a mission to reinstate its lost glory and admiration of being a family-oriented tourist trap, Sutro embarked upon an ambitious renovation project. He hired a lot of employees and sanctioned a new railroad pathway to augment accessibility.

Unfortunately, Sutro was unable to operate and manage the restaurant himself. Therefore, he leased it out to Sroufe and McCrum, a wholesale liquor company. It was later again rented out to J. M. Wilkins in 1885 with the sole target of bringing the families back. In 1887, the resort met with a severe calamity, when a schooner (sailing ship) called Parallel, loaded heavily with 40 tons of explosive underwent a massive head-on collision with the rocks underneath the restaurant structure which in turn exploded and the north wing of Cliff House was fully destroyed. The devastation was restored and Cliff House was rebuilt. It continued its operation until the Christmas day in 1894 when another cataclysmic chimney fire broke out and engulfed and annihilated the whole building in just 30 minutes.

In February 1896, the venue opened again to the public, this time as a replica of a Victorian French Chateau, after a colossal reconstruction work was carried out by Sutro that cost over $75,000. An added attraction, this time was the observation tower that was erected 200 feet above the sea level facing the Pacific Ocean.

The newly revamped resort was a seven-storeyed building hosting a number of restaurants, an art gallery, a studio, a gem exhibition centre, leased out reception rooms, countless exclusive dining rooms and bars. It was also called the “Gingerbread Palace”. The same year ushered in the construction of the famed Sutro Baths on the northern side of the restaurant. 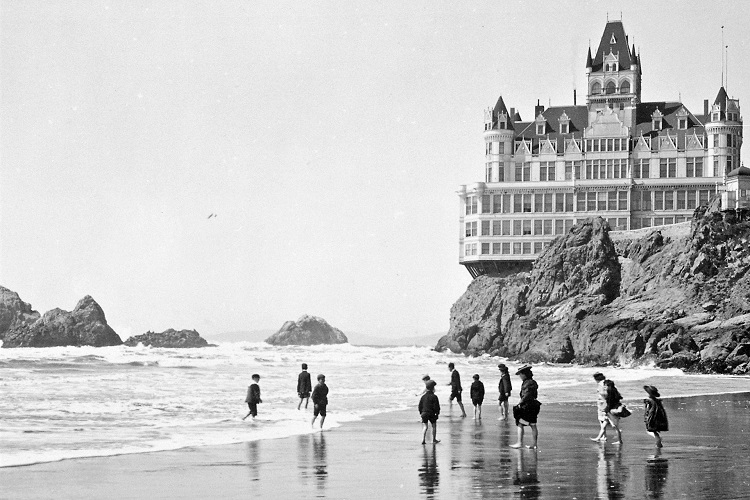 In 1898, when Adolph Sutro died, Cliff House was once more leased to John Tait. Mercifully, Cliff House managed to survive the calamitous San Francisco earthquake in 1906. It was planned to recommence its operation in the September of 1907 when regrettably, it caught fire another time and was totally decimated. The property was later taken over by Emma Sutro Merritt, Sutro’s daughter in 1908. She reconstructed the Cliff House with fireproof concrete material and steel. Although the new building was much smaller in size, it anyway intermingled with the neighbouring locale instead of counterpoising the view of the ocean. It opened again in 1909, nonetheless obliging to the wealthy and affluent.

The resort eventually downed its shutters once more in the year 1925, when during the Prohibition, its patronage plummeted sharply. It changed hands and became the property of George and Leo Whitney who then owned a neighbourhood amusement park named Playland-at-the-Beach. Cliff House for the umpteenth time was overhauled and reopened in 1938. It kept on with its steady operations until 1977 when the National Park Service took over its complete ownership rights and the resort became a part of the Golden Gate National Recreation Area. The National Park Service later signed a contract for the maintenance and management of the Cliff House with Dan and Mary Hountalas, as the deemed concessionaires. They have been managing and running the resort under the renewed contract name of Peanut Wagon over the past forty years. They were significantly instrumental in the completion of a comprehensive site restoration project in 2003 for the Cliff House when the building was reinstated to its foregoing 1909 appearance after removing a lot of Whitney’s modifications. Now, the official address of Cliff House is 1090 Point Lobos Avenue.

It is superbly designed with ultra-modern skylights. A new two-storeyed wing after the name of Adolph Sutro is also constructed overlooking the wreckage of the Sutro Baths that was completely gutted on June 26, 1966. The major offerings are a handful of party rooms, two major restaurants, a chic and stylish bistro meant for casual dining and the more traditional Sutro’s. The Terrace Room serves an as-much-as-you-can-eat-and-drink Sunday champagne brunch buffet. The Bistro always has a first-come-first-serve policy. 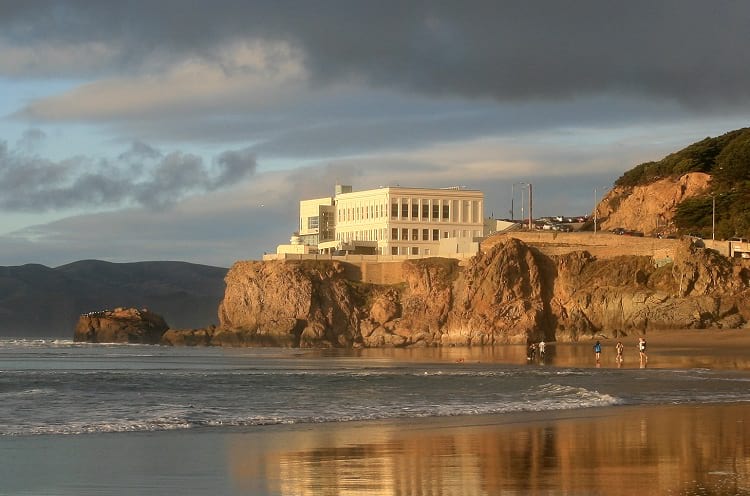 In the present day, Cliff House has garnered unprecedented popularity among the local natives for countless wedding receptions and holiday parties. It also provides a soul-stirring getaway to relax and unwind by enjoying the breathtakingly beautiful scenery of the Pacific Ocean through the expansive floor-to-ceiling windows of the Sutro’s restaurant. 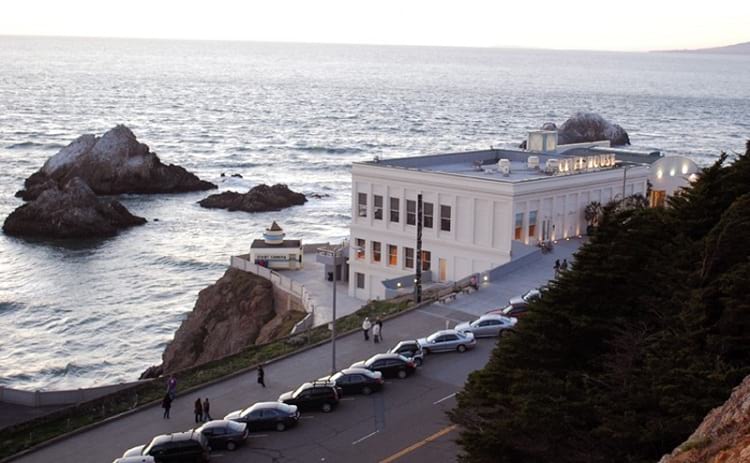 The building also accommodates a gift shop and the momentous “camera obscura” in the Land’s End area on a deck looking on to the ocean. 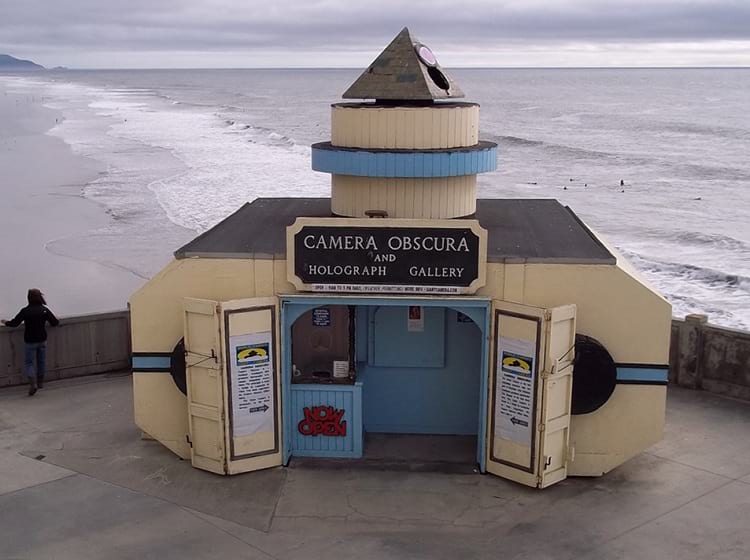 The jinx of the Cliff House and Sutro Baths

Over the years, there have been occurrences of a number of preposterous incidents surrounding the Cliff House and Sutro Baths that have the makings of a perfect horror flick. Mediums believe that the Cliff House area has always been overpowered by an uncanny energy. As the legend goes, a fidgety apparition that wanders tirelessly through the rocks adjoining the Cliff House belongs to Natalie Salina Harrison, who waited all her life, on the shore, for her fiancé to come back from the World War I. Her anticipation and expectation were all in vain and she died a broken-hearted tragic death. Since 1917, rumours of people having encountered her spirit started pouring in.

Even the ruins of the Sutro Baths are claimed to be haunted suggesting the prevalence of sporadic paranormal activities. The “ghosts” of a drowned old man and a woman are said to frequent the spot. Many people have also reported having seen phantoms of Victorian ladies sauntering along the beaches with parasols. It is known that the land around Cliff House used to be the Golden Gate Cemetery. This undeniably has not eased up the spectre of the weird form of energy from that area. These days, the potential risk of getting engulfed and surged over by an aberrant wave is the most critical concern for people visiting Cliff House.

But all these creepy stories of the world cannot deter the place’s burgeoning popularity among the locals and tourists, thanks to its spellbinding panorama and the captivating history. Maybe that is the reason why all those spirits here have stayed around too.

Previous Article
The Famous Pollepel Island of Hudson River: Home to a Castle of a Bygone Era
Next Article
Krakatoa Volcano: An Earth-Shattering Explosion That Ruptured the Eardrums of Many