Pink Lakes: Where Rose-Tinted Lakes Surrounded By Lush Greenery Are Truly a Sight to Behold Oceans, rivers, and lakes, as a rule, contain salt amongst other minerals with oceans having the highest content of salt since they contain waters from rivers and lakes combined. Rainwater renews the water in rivers; hence the salt is most diluted in them. Lakes, on the other hand, can be both freshwater and salty. When a lake contains an excessive amount of salt, it starts to produce a type of algae that has a reddish-pink hue to it. The lakes with this type of algae are colloquially known as pink lakes due to their colour.

Saline lakes generally have a higher concentration of salt and chemicals than most lakes. Lakes become saline when there isn’t enough water flowing into them or the water flowing into it is unable to drain into the sea, the remaining water then goes through the natural evaporation cycle thus increasing the concentration of salt. When lakes reach saturation or near saturation point of salt, they are termed as brine lakes. Brine lakes have extremely high salt concentrations of 40%, which is even higher than the ocean. They exist due to very high evaporation rates in dry climates. Saline and brine lakes have a very unique flora and fauna that can only survive in such high salt concentrations.

In Australia, there are 3 pink lakes existing due to this condition. Hutt Lagoon lies north of the Hutt River in Western Australia. There are tourism road trips that take you from Port Gregory to Kalbarri, on which you can view the Hutt Lagoon. It can also be seen from flights. It is an excellent place for salt production. The salt and gypsum produced here have received commendable recognition. 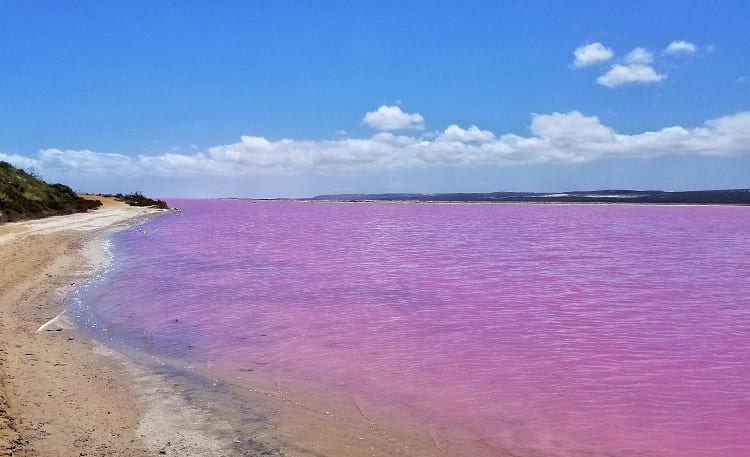 Spencer Lake lies in the Goldfields-Esperance region of Western Australia. It had not been pink for a decade until 2017, and it is speculated the reason for this was due to the construction of a railway and a highway. Lake Hillier also lies in the Goldfields-Esperance region and is often confused with Spencer Lake. It is noted that the lake appears a bright bubble-gum pink from flights, but up close near the shoreline it only has a light pink hue. 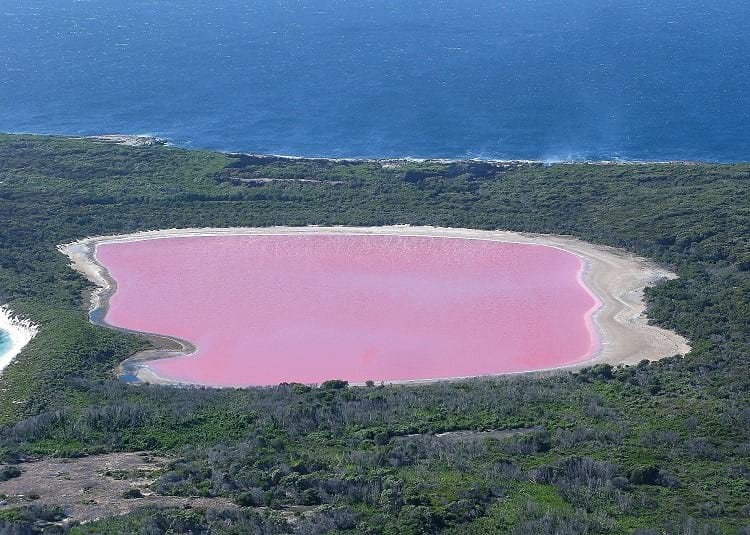 In Senegal, Africa, the Lake Retba also exist under similar conditions of high salinity and a pink hue. Although, due to seasonal variation, the pink hue is majorly visible during the summer season and not as much during the monsoons. The flora and fauna here are different than in the Australian lakes, however; the fish here have evolved to live in saline waters but are much smaller than average due to dwarfism. 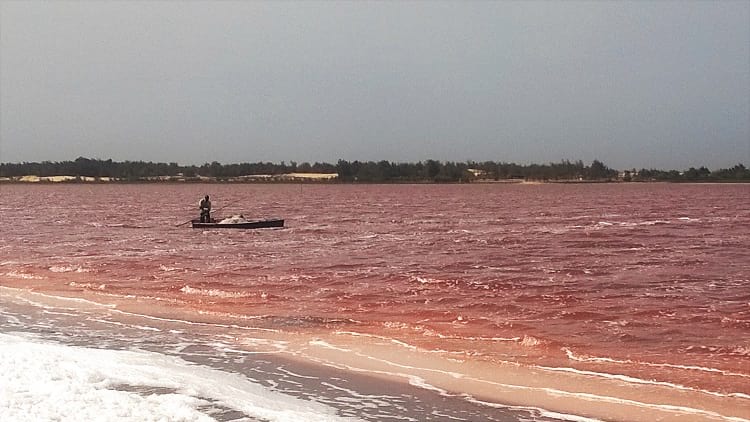 Other pink lakes around the world

Apart from these, there are other pink lakes that exist due to similar conditions. There’s another one in Australia called Quairading Pink Lake and a Field of Lakes which has multiple pools of pink water with varying shades of pink. There is also the Salina de Torrevieja in Spain and the Masazirgol in Azerbaijan. Although, the Dusty Rose lake in Canada is pink not because of high salinity but because of the rock flour that pours into the lake from surrounding glaciers. 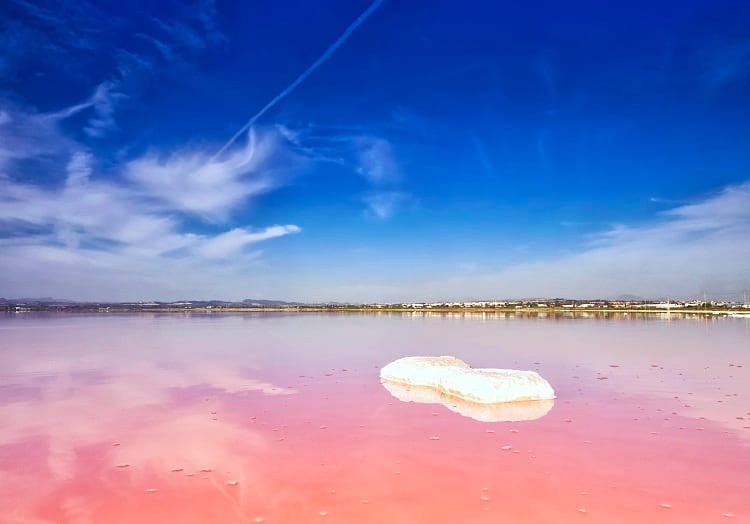 The speciality of Lake Retba in Senegal

Considered a high-ranking contender in the list of UNESCO World Heritage Site since 2005, the pink-coloured Lac Rose or Lake Retba in Senegal is a bit different from most of the other pink lakes in the world. Its high salt content makes it almost impossible for living creatures to drown in it, thus making it a lot like the infamous Dead Sea of Jordan. People can float in it but there are a host of activities that a tourist needs to undertake just to have a dip in the pink lake.

The Senegalese lake is also known for its salt collection activity, which in itself is an interesting task. Fishermen, armed with spades, make use of narrow canoes to bring back huge chunks of salt from under the water body. They position themselves in the middle of the lake and start digging for salt, which they then collect in large baskets and bring them back to their boats. The women folk then wade through the shallow waters to collect these chunks from the canoes to bring them ashore. Here the salt is later treated with iodine and processed further before it is sent out into the West African markets. 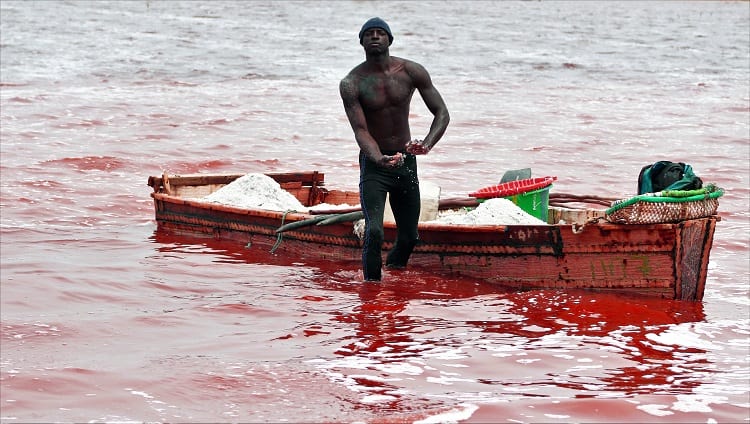 One thing that sets the salt collecting activity in Lake Retba apart from the regular ones is the use of shea butter. Fishermen and women both apply shea butter on their exposed skin parts to protect themselves from the dangerous effects of the high salt content. In the absence of shea butter, the salt in the lake has the potential to cut open the skin or make wounds to the exposed areas. 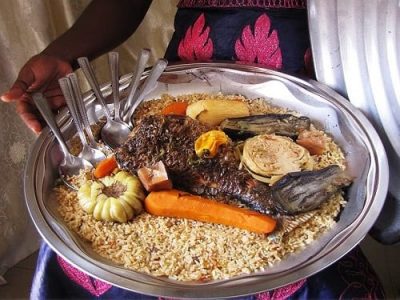 But if there is one thing that people really love about Lake Retba, it is a traditional delicacy prepared from local fish. Called thieboudienne, it is a dish prepared with a mix of rice, tomato sauce and fish, which Senegalese fishermen preserve using salt, obtained especially from Lake Retba. The stew is a very popular dish in the country and Lake Retba provides for the continuous supply of salt for the particular food item.

The science behind the colour

The science behind the pink coloured lakes is actually quite complex. The salt content of the lakes has to be higher than that of the sea, and the temperature has to be high enough, and perfect light conditions have to be met. The high content of salt in the lakes makes it a breeding ground for a beta-carotene producing algae, also scientifically called Dunaliella Salina, that thrives in salty environments.

Beta-carotene is the same chemical that is found in carrots, and that gives it its orange colour The chemical is actually a reddish-pink colour, but the combination of it being mixed with water and the right light conditions give the lakes a pink hue. Carrots only contain 0.3% of beta-carotene, whereas these algae contain up to 14% of it. This chemical also coats the chlorophyll that is found in the algae, thus protecting it from the extreme heat conditions in these arid regions.

The environmental conditions are so vital to the colour of the lake that any external changes can affect it. One such example is Spencer Lake; since the construction of the Southcoast highway, the lake lost its connections with Lake Warden which supplied the lake with salty water. Once the connection was lost, the algae began to perish, thus making the lake lose its pink hue. 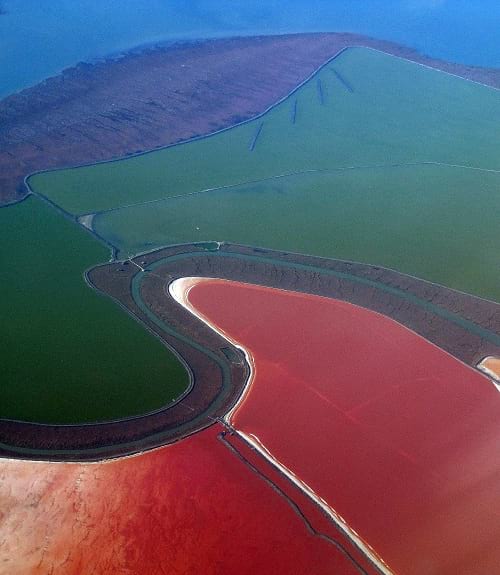 Salt lakes prove to be an excellent place for salt production and help manufacture table salt which is an important constituent of our diets. Even the climate that is created by the evaporation cycle around these lakes is supposed to be one of the healthiest. In fact, the microclimate that surrounds the lake in Spain is considered to be the healthiest in all of Europe by the World Health Organization (WHO). Many of these lakes are also rich in minerals with healing properties for skin and lung disease patients. These salt lakes are also heavily laden with brine shrimp, which are used by fish farmers as feed for the fish and in the aquarium fish market.

Most importantly, these lakes also help bring in tourism trade due to their uniqueness. The elaborate conditions for the lake’s existence are not easy to replicate elsewhere, and hence draw tourists from all over the world. There are special road trip tours as well as flight tours that help you see these mythical-looking natural wonders.

Previous Article
The Soyuz 11 Tragedy – The Death of Three Soviet Cosmonauts in Space
Next Article
Sex in Space – Is It Possible? and Why It is Important