Old Man of the Lake: The ‘Stumping’ Story of a Century-Old Log, Bobbing Inexplicably in Oregon’s Crater Lake A tree stump in Oregon’s Crater Lake has stood right in the middle of the waters, defying the laws of physics for more than a hundred years. Known as the Old Man of the Lake, the stump has baffled visitors and geologists alike regarding its more-than-a-century-old existence.

Legends associated with the formation of Crater Lake

Although it is known that the lake was formed as a result of volcanic activity, locals have a different belief. As per the Native American folklore, a battle of epic proportions was fought between two volcano gods about 7,700 years ago during the night in southern Oregon. The god of the underworld – Llao – fell in love with Loha, the extremely beautiful daughter of a local Klamath chieftain, who turned down his proposal, citing he was ugly to look at. Angered by the refusal and downright humiliation, Llao, standing on the summit of Mount Mazama, spat magma and threw extremely hot steam jets towards the sky. These fell back to the earth in the form of rain, pouring hot lava and fire on the village.

The Klamath chieftain then turned to the god above – Skell – to intervene and save them all. Skell then descended from heaven on California’s Mount Shasta and hurled volcanic ash and fireballs at Llao in retaliation. In the battle that continued for days, he blew up Mount Mazama and drove Llao back into the underground, locking him inside for eternity. To mark his victory over Llao and restore peace in the land, Skell covered the large caldera by filling it with crystal clear waters. That is how Oregon’s Crater Lake came into being as per local legends, which till date is considered sacred.

Location, formation and specifications of the Crater Lake

Known for its intense blue colour and water clarity, the Crater Lake is the deepest lake in the United State measuring a depth of nearly 1,949 feet (594 m). Situated in Klamath County, Oregon, Crater Lake was formed approximately 7,700 years ago, when Mount Mazama collapsed as a result of a volcanic eruption. The crater that formed in the process was almost 2,148-feet deep, and was later partially filled up with water resulting from annual rainfalls and snowfalls in the area. Since water does not flow out of the lake and also because there is an absence of water inlets, which could bring pollutants to fill up the caldera, Crater Lake has some of the purest waters in the world. Scientists have measured a record clarity of 175 feet below the surface, which is till where the naked eye can see clearly under the waterline. Due to the low temperature of the water in the volcanic basin and greater levels of dissolved salts present in it, the cold, deep blue water in Crater Lake is slightly alkaline in nature.

The Crater Lake has no native fish, however, seven species of fish were introduced in the lake from 1888 to 1941 of which only kokanee salmon (Oncorhynchus nerka; landlocked sockeye salmon) and rainbow trout thrive today.

Two of the main features of the lake are the volcanic cinder cone in the far west of the lake called Wizard Island and the other is the puzzling Old Man that has been bobbling in different locations in the lake for over a hundred years.

History of the Old Man of the Lake

Apart from the lore and horror stories that are a part of the local culture, one bizarre phenomenon that literally sticks out from the water is the Old Man of the Lake. Standing untethered for more than a hundred years, the hemlock tree stump has gained celebrity status among tourists. Long before Oregon’s Crater Lake became a part of the national park, this unusual deadwood was found floating in a vertical position in the water body and nobody could guess where it came from.

It was initially thought that the Old Man of the lake, could have been vertically wedged between a rock, but it was not.

Trees that float (mostly horizontally) eventually sink to the bottom, however, the Old Man showed no such signs. Instead, it continued staying afloat for decades together, without having any root structure to support itself or any telling marks of decay.

In the year 1902, when Crater Lake achieved the status of a national park, American geologist Joseph Silas Diller was sent to scientifically study the aftereffects of the volcanic event and collect rock samples from the Crater Lake. This is when he first recorded about an unusual bobbing tree stump in the lake, which he had observed six years ago in 1896 and was still afloat in the lake. He noticed that the chunk of wood had moved from its earlier position from where he had first found it.

Specifications of the Old Man of the Lake

Aquatic biologist Scott Girdner ran carbon dating tests on it and found that the stump itself is approximately 450 years old. Measuring thirty feet tall in height, nearly four feet of the Old Man’s upper part sticks out of the water, which remains perpetually dry. The upper part is bleached due to continuous exposure to the sun and has a splintered texture. The part floating above the water is around two feet in diameter and the Old Man is wide and buoyant enough to support the weight of an adult person. 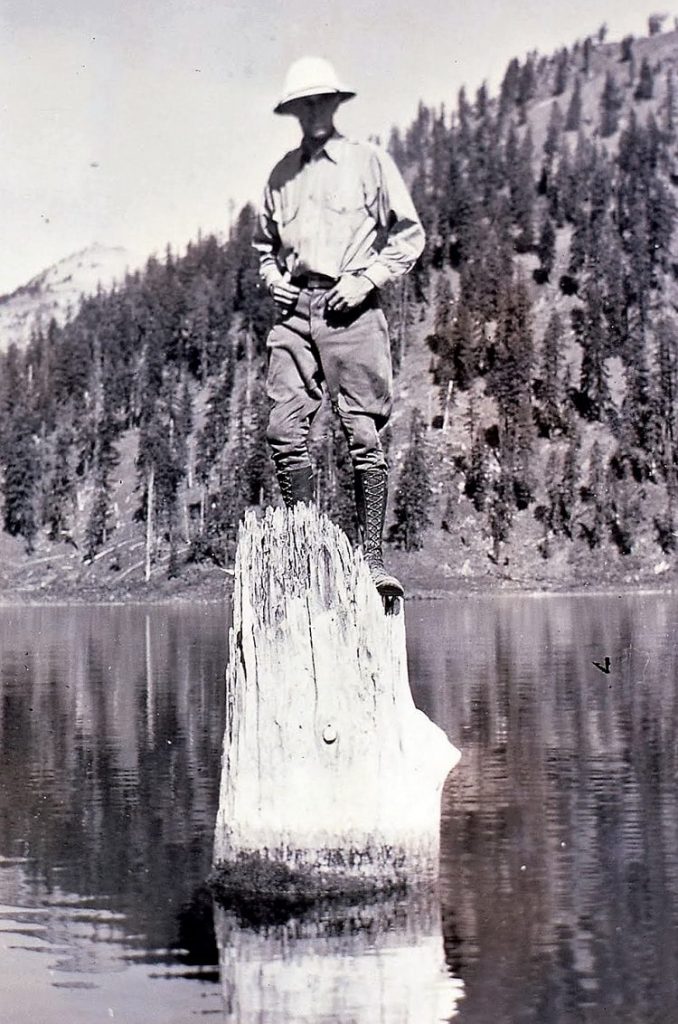 The stump keeps moving throughout Crater Lake due to water currents and wind patterns. On particularly windy days, the trunk travels at greater speeds, at a rate of nearly 6 kilometres/day.

How has Old Man of the Lake managed to stay afloat for more than 120 years?

Scientists believe that the lower rate of precipitation and evaporation and the relatively cold water of the lake have preserved the stump, making it possible for the Old Man of the lake to float freely. They also concluded that since the lower part of the tree stump has been in the cold water for over a hundred years, its density has increased, making it buoyant and balanced inside the water. However, there is no concrete data to support these claims.

Superstitions and stories related to the Old Man of the Lake

Along with the mysterious formation of the Crater Lake and the circumstances under which the Old Man ended up vertically in the lake, there are a host of other tales that are associated with the place. People have reported spotting campfires in the dead of the night on the uninhabited Wizard Island. Some even claim to have seen ghostly figures in the lake vicinity. Local people also say that the Old Man represents perfect balance like that between earthly elements – of darkness and light, good and evil, earth and sky, movement and immobility and Llao and Skell. It is also said that the perplexing tree stump possesses otherworldly powers with which it can control the weather. And surprisingly, a team of researchers had to give up on their expedition when the ancient stories appeared to come true.

In the year 1988, a team of scientists was sent on an expedition to study the geothermal activity in the volcanic basin at Crater Lake. A submarine was employed to take the explorers below the surface of the water and carry out their experiments. Known for its ability to travel with the winds and water currents, the team thought that the Old Man might pose serious navigational problems to the vessel, hampering their research. And so to keep it from getting in the way of their study, the team decided to tie it towards the eastern side of the Wizard Island for a few days until work was over.

But as soon as the Old Man stood still, all tied up in the lake, the research team experienced a sudden change in the weather. Oddly enough, the clear skies became dark and hazy and the weather became stormy. This continued on for a while making the team suspicious of the weather situation owing to the behaviour of the Old Man. So long as the dead tree stump was bound, the dark clouds refused to clear out and the team had to free the Old Man eventually. No sooner was the stump untied than the sky became clear and the weather settled, puzzling the researchers even more. The study was ultimately left midway and the Old Man was never bound again.

It is yet to be seen what new facts are unearthed from research works on the stump at Crater Lake, but one thing is clear that the Old Man of the Lake will continue to ‘stump’ people whenever they cross paths with it.

Enjoyed this article? Also, check out “Min Min Light: The Elusive Phantom-Lights of the Australian Outbacks“.

Fact Analysis:
STSTW Media strives to deliver accurate information through careful research. However, things can go wrong. If you find the above article inaccurate or biased, please let us know at [email protected]ststworld.com.

Previous Article
Deepwater Horizon Oil Spill: The flare Up of the Depleting Fossil Fuel
Next Article
Brief History of Cricket: From a Suburban Pastime to a Gentleman’s Game