The Time Pyramid of Wemding: A Pyramid That is Scheduled for Completion in 3183

The Time Pyramid, known in the German language as Zeitpyramide, is a public artwork project that has been a work-in-progress in the German town of Wemding since 1993. Manfred Laber, a local artist, conceived the idea of building this pyramid to commemorate the 1200th anniversary of the establishment of the town. As per Laber’s plan, the Time Pyramid is going to take another 1200 years to complete. The artist’s hope is that this deliberately long drawn out construction will help the present generation and the future ones to understand the significance of a very long span of time.

Wemding is located in Bavaria’s Donau-Ries district, on the edge of a meteorite impact crater formed in the Miocene Age many millions of years ago. Established in 793, it is a charming town with many historic sites. It is well-known for its rose gardens and its fuchsias that make for a beautiful sight in the spring and summer. It is also now known for the Zeitpyramide.

It is perhaps the only town in the world that is building such a pyramid, and the project is likely to bring it more revenue from increased tourism. A foundation based in Wemding is overseeing the building of the Time Pyramid, and the funds for the project have so far come from generous contributions made by local businesses.

The idea behind the Time Pyramid

The premise of the Time Pyramid is that the builders will lay a single concrete block for its structure every ten years. If everything goes according to schedule and if future generations remain cooperative about continuing to work on the project, the pyramid will be completed in 3183.

The concrete blocks for the Time Pyramid 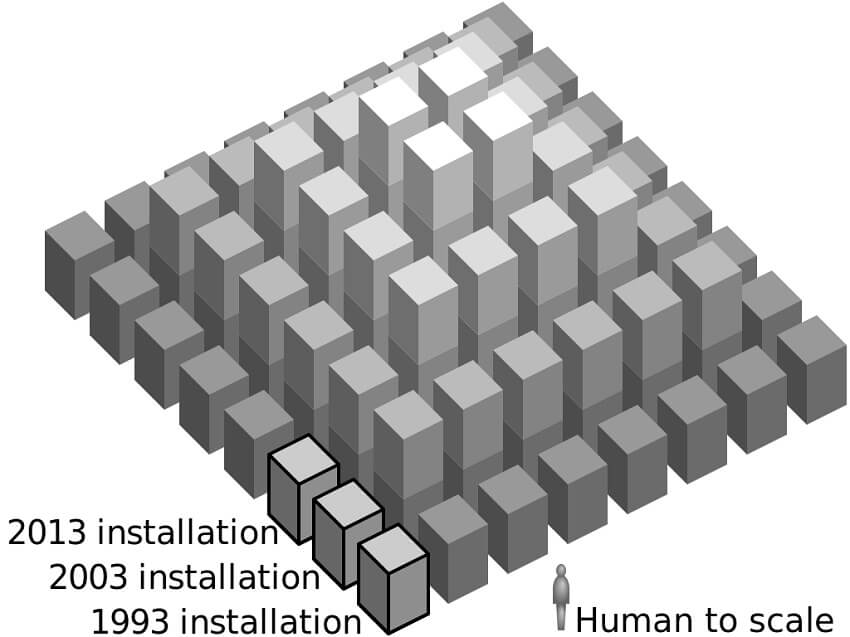 The builders selected concrete blocks as the most cost-effective materials for the construction of the Zeitpyramide. However, it is possible that future generations, if they find it worthwhile to keep building the pyramid, may use stone or other materials not yet known.

Each of the concrete blocks for the Zeitpyramide are to be around 4 feet in length, 4 feet in width, and 6 feet in height. The first block was put in place in 1993, the second in 2003, and the third in 2013.  In total, there are to be 120 blocks that will make up the entire pyramid, and each of these blocks weighs several tons.

Possible issues with the completion of the Time Pyramid

While planning to construct a Time Pyramid across a span of 1200 years, the builders, of course, expect the structure to last that long. However, it is essential to consider if the concrete blocks used to build the Time Pyramid will be able to stand the test of time.

Since concrete is a porous material, water can soak through it. Over time, the water seepage will corrode the reinforcing steel bars and meshes used inside in the construction of the concrete blocks. That will result in minor cracks and these will soon expand and may even cause the blocks to break.

The cyclical freezing and thawing that occurs seasonally in the Bavarian region can have a particularly ruinous effect on the concrete. To prevent the concrete blocks from weakening and breaking over time, it may help to an extent to get the blocks specially treated with sealants. They will then be better able to withstand the effects of the weather.

In the construction industry, sealants such as sodium acetate are commonly used to increase the lifespan of concrete blocks. However, few buildings are constructed with the idea of lasting for 1200 years. There is no way of knowing if the currently used concrete sealants will be able to retain their protective capacity for such a long duration. Perhaps, though, there might be better materials in the future that might be used for sealing the concrete blocks. That is, if later builders continue to use concrete as the building material.

The Zeitpyramide is being built on the Robertshöhe hill that is to the north of Wemding. The builders have created a concrete base and the Time Pyramid will come up on this.

The pyramid will have a base tier and four tiers thereafter. The base tier will have 64 blocks placed in eight rows and eight columns in a 45 feet by 45 feet area. It will take until 2623 to complete the base tier and by this time, Wemding will already have had its bi-millennial anniversary.

The second tier will be completed in 2983 and will have 36 blocks that will be arranged in a 6 by 6 format. These blocks will be placed on top of other blocks. Given how heavy the concrete blocks are, it will be necessary to use a crane to lift them and place them in the right positions.

The adjacently placed blocks of the Zeitpyramide will be separated from one another by a distance of two feet. So, close up, visitors will only see stacked concrete blocks. It is only when they step back that they will be able to see the pyramidal shape.

Building pyramids is not a new idea in human history, but the concept of building a Time Pyramid that spans centuries is quite a first. It would be interesting to know what the people of the future think of it.

Previous Article
Carl Panzram: The Serial Killer Who Epitomized Evil
Next Article
Pan-American Highway: The Longest Road in the World Measuring About 30,000 Kilometres