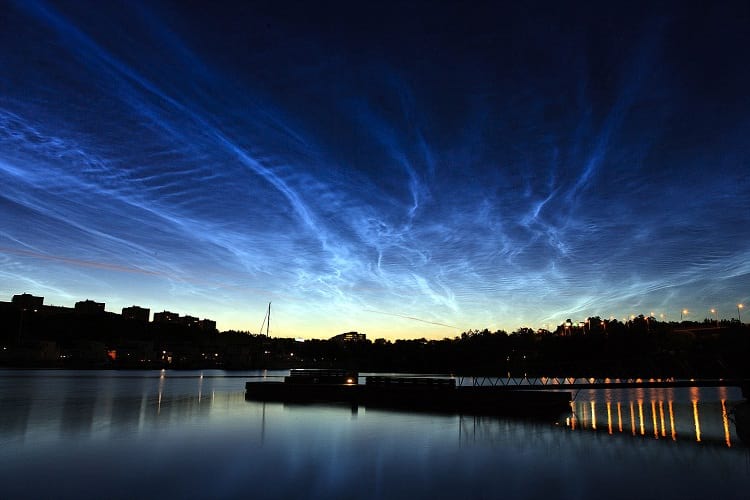 Noctilucent clouds also called the “night-shining clouds” are slight and indistinct occurrences which are observed in the uppermost atmospheric layers of the Earth. They comprise of tiny and delicate ice crystals and dust particles of extraterrestrial meteor smoke that return to the skies during an astronomical twilight. Noctilucent is a Latin word which more or less means “night-shining”.

The phenomenon can be observed only during the polar summer months at latitudes between 55 and 65 degrees in the northern and southern parts of the Equator. The clouds are visible when the sun while setting shines on them. They are formed at an altitude of 80-85 km (50-53 miles) below the mesosphere. The Mesosphere is known to be the coldest part of the atmosphere with temperatures hitting as low as −140°C.

The clouds often display a tenuous and meandering pattern that signifies the presence of forceful wind currents at that high altitude.

The first sighting of noctilucent clouds was reported in the year 1885 when separate instances of observation happened in Russia and Germany. The event was sighted two years following the volcanic Krakatoa eruptions in the straits of Java.

Over the recent decades, both satellite and ground observations have suggested that noctilucent clouds manifest enhanced brightness. They are also found to have descended to lower altitudes and are now being observed at ever-increasing frequency intervals. 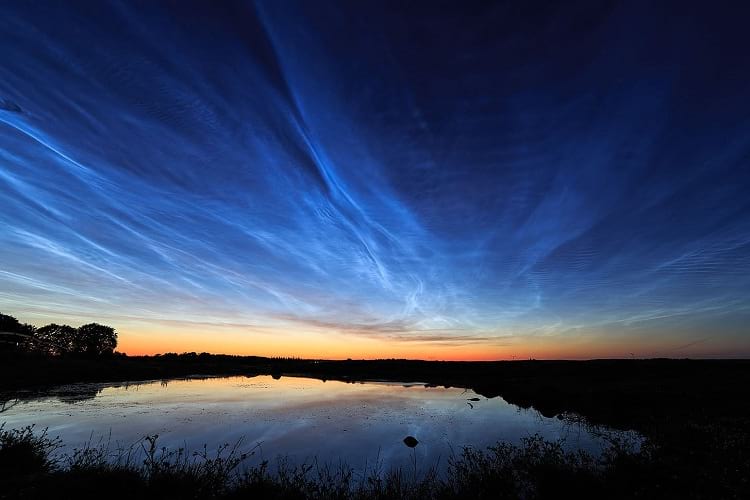 Theories revolving around the origin of noctilucent clouds

At first, the formation of noctilucent clouds was assumed to be caused by the distribution of the volcanic detritus of Krakatoa. This resulted in numerous picturesque sunsets. It had many alert observers watching and discovering the noctilucent clouds at these points in time. They were actually trying to make thorough studies and researches on the summer twilight sky. Scientists surmised that the volcanic ash had been beautifully revealed. This occurrence was observed after the water vapour and tropospheric dust was injected into the cold and dry upper mesospheric layer. The clouds persisted even after the volcanic embers settled down.

The observations that followed later pinpointed that the volcanic activity is not entirely related to the inception of the noctilucent clouds. Even now the claim of the volcanic link is found to be scientifically disputable. Alternatively, it has been conjectured that the emergence of the earliest evidence of noctilucent clouds is owing to anthropogenic climatic variations. Over the past 30 years, the observations hovering over north-west Europe show an increase in the number of such cloud formation in every summer season.

Competing for the anthropogenic explanation for these extensive occurrences of noctilucent clouds are opinions that centred on unrestrained greenhouse cooling happening in the middle atmospheric levels. It also hinted at the intensified origination of water vapour linked to the substantial release of methane and heightened mesosphere humidity. These were primarily associated with concentrated farming and agricultural activities.

However, scientists still don’t absolutely comprehend the composition of water ice crystals and how water can get that high in the atmosphere. They speculate the methane concentration that may be propelled higher into the mesospheric layer end up generating water and ice at such high altitudes. Furthermore, the fact that there is no evidence of sightings of the noctilucent clouds before 1885 adds to the mystery.

Before, the exhaust gases emanating from various Space Shuttles and rockets have likewise been observed in contributing to the arrangement of the noctilucent clouds. 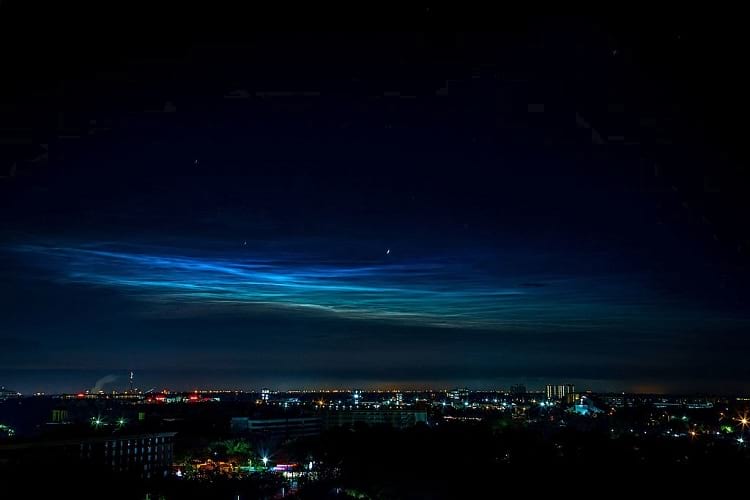 Positional and visibility aspects of the clouds

The best time to look for noctilucent clouds is late spring or early summer about 30 minutes after sunset towards the west. The clouds incandesce as shining white and pale blue tendrils across the dark twilight sky. This allows them to be distinguishable from the cirrus clouds that are visible only during the daytime as they don’t exhibit any luminescence.

Scientists and researchers studying these clouds have incorporated the information collected from NASA’s AIM (Aeronomy of Ice in the Mesosphere) satellite. Launched in 2007, the AIM spacecraft was particularly designed to explore the noctilucent clouds. The satellite measured their methods of formation and probable connections to the global climatic changes.

The satellite has examined these clouds by utilizing different onboard instruments to gather data. This included elements like temperature, ice crystal size, atmospheric gases, the cloud’s changing patterns and the meteor dust that penetrates into the atmosphere. 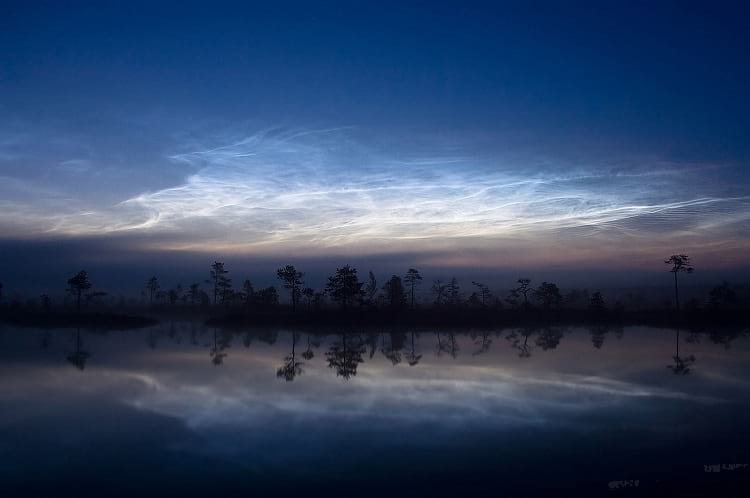 The clouds exhibit an eclectic variety of characteristic patterns and forms.

One of the most compelling visual aspects of the noctilucent clouds is their colour. This is essentially the end result of the vivid atmospheric effects engendered by the Sun’s strategic position below the horizon during the sunset.

On the horizon, where the base of the noctilucent clouds merges, one can experience red, yellow, orange, green and golden hues. In the higher layers the clouds sport amazing white and silver colours.

The top of the clouds has a stunning purple or electric blue canopy. The vibrant blueness is believed to be caused due to the absorption of sunlight by the stratospheric ozone layer. This amalgam of colours creates a delightful artwork against a sweeping canvas of stars.

Photos of noctilucent clouds can be effortlessly captured with the help of a digital camera tightly settled to a tripod; using 400 ISO provides great results or even a smartphone. An exposure from 3 to 6 seconds and a lens aperture configuration of f3.4 will typically get the job done.

Nonetheless, it is advisable to take a few shots of various exposures and choose the best one. When this is done an attempt can be made to create a breathtaking panorama by clicking some overlapping photographs.

Fact Analysis:
STSTW Media strives to deliver accurate information through careful research. However, things can go wrong. If you find the above article inaccurate or bias, please let us know at [email protected]

Previous Article
Krakatoa Volcano: An Earth-Shattering Explosion That Ruptured the Eardrums of Many
Next Article
Enriqueta Martí: The Vampiress of El Raval