Solifugae: Unique Creatures That Are Neither True Scorpions Nor True Spiders 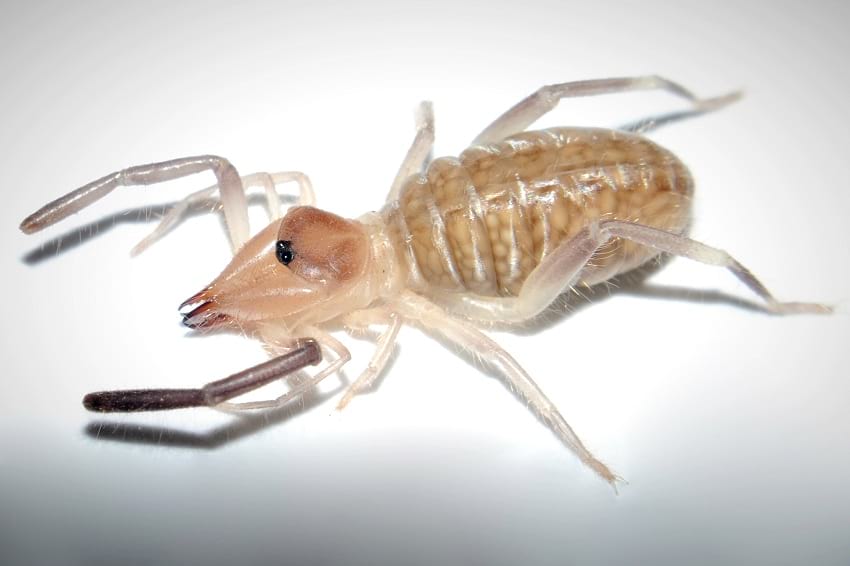 Solifugae are strange-looking creatures and, despite many studies, there is still much about their physical attributes and behaviours that we don’t know.

The name solifugae has Latin roots and means those that run away from the sun. It is a reference to their nocturnal habits. The creatures are also known as camel spiders, wind spiders, wind scorpions, sun scorpions, sun spiders, red romans, baardskeerder, and haarskeerders. The last two are Afrikaans terms for beard cutters and hair cutters.

Solifugae look like they might be a cross between spiders and scorpions, but, actually, they are a distinct species with over 1000 varieties in 153 genera. They are members of the Arachnida class and belong to the superorder Haplocnemata; they and the Pseudoscorpiones order are the only teo members of this superorder.

At first glance, though, solifugae do resemble spiders in physical appearance. The brownish-yellow or mottled solifugae body has two tagmata that consist of an abdomen known as opisthosoma and a prosoma, which is a combination of head and thorax and is also known as cephalothorax. There is no third tagma that forms a tail as is the case in scorpions, and they also do not have poison glands to produce venom.

The posterior opisthosoma has ten segments and the anterior prosoma has two segments. The prosoma has a prominent, arch-shaped plate—which is why these creatures are also known as camel spiders—and a pair of central simple eyes and a pair of lateral ones. There is no pedicel separating the prosoma and the opisthosoma as there is in spiders. Solifugae also do not have spinnerets like spiders and do not spin webs, and so do not need to have mobile abdomens like spiders do to use for their spinning activities.

There are six pairs of appendages that arise from the somites on the prosoma, but these are not all actual legs.

The first pair are the pedipalps that barely touch the ground while the solifugae are walking or running, and function more like antennae to detect things in their path. The five-segmented pedipalps have adhesive organs that are reversible and are used for climbing, defence, and to catch flying prey. Then there are the conspicuously large, distinctively curved chelicerae. Each of these have two articles that form powerful, crab-like pincers and, depending on the species, have a variable number of teeth. Using these chelicerae, solifugae can cut through hair, feathers, skin, and thin bones. They also use them to make rattling sounds to warn off enemies or attract potential mates.

Only the posterior three appendage pairs are real legs. They are each made up of seven segments. Two of these segments, the coxae and the trochanters, have fan-shaped organs known as malleoli on their undersides. The solifugae can turn the malleoli blades forward and backward, but the exact function of these organs remains unknown. The surmise is they may have a sensory use to detect prey, potential mates, threats, and ground vibrations. The other segmented parts of the real legs are femur, patella, tibia, metatarsus, and tarsus.

Using the real legs, the solifugae can attain speeds of 16 kilometres per hour, probably making them the fastest invertebrates on land.

Since the solifugae don’t have book lungs, they use their tracheal system to breath through three slit pairs that are located on the underside of the opisthosoma. Pseudoscorpiones also have the same breathing system.

Lengthwise, there are size variations in different solifugae species. Some mature specimens can grow up to 12 to 15 centimetres in length, while others are five to seven centimetres and some are under one centimetres.

Regions where Solifugae are found

While it is commonly assumed that solifugae are desert dwellers, they actually occur in a range of environments. Aside from deserts, semi-deserts, and scrubland, they occur in mountains, forests, and grasslands. They generally prefer warm temperate and tropical regions, and are widely found in Africa, Asia, the Americas, and Southern Europe. There are no solifugae in Antarctica, New Zealand, and Australia.

The diet of the solifugae principally consists of termites, beetles, and other small arthropods. They also feed on small lizards, rodents, snakes, birds, and other creatures. They are fast-moving and ferocious predators and most of them emerge out of their semi-permanent burrow only at night. They locate their preys with the pedipalps and use the chelicerae to grab the prey and cut it to pieces. They then liquefy the prey and use their pharynx to consume it. The solifugae are not dangerous to humans. They don’t have any venom to poison you with, and, for all their fabled speed, they are not going to outrun you. However, they can and will inflict painful cuts with their chelicerae if you get too close.

The sexes are separate in the solifugae, and they reproduce by direct mating or by engaging in indirect sperm transfer. In the latter reproduction method, the male solifugae releases a spermatophore. He then uses his chelicerae turn the female solifugae on her back and inserts the spermatophore into her genital pore.

The solifugae develop without metamorphosis. The postembryo that will emerge from the eggs will transform into nymphal instars and then develop into adult solifugae.

They have a lifespan of one to two years.