Cave of the Crystals: A Geological Wonder with Giant Shimmering Crystals Cueva de los Cristales, known as the Giant Crystal Cave or Cave of the Crystals in English, is a true testimony of how beautiful our mother nature can be. Located just below the Naica Mine, Chihuahua, Mexico, this cave is literally ‘full’ of gigantic natural crystals that can easily overshadow anything that is about the size of a human.

To be more precise, this hidden cave is present at a depth of 300 meters measured from the surface and produces selenite-gypsum-crystals that can get as big as 12 meters in height. Scientists have estimated the biggest crystal to weight a massive 55 tonnes!

The cave was accidentally discovered by two miners in 2000 who were trying to excavate ‘a new tunnel for a commercial lead and silver mine’ for a Naica based mining company called Industrias Peñoles. Earlier in 1910, miners working in the mine managed to discover a cavern. It was above the recently discovered ‘Cave of the Crystals’ and relatively closer to the ground at a depth of about 120 meters. It harbors smaller crystals but has its wall full of dagger sized crystals, hence the name, ‘Cave of Swords’.

Life inside the cave of the crystals

While the ‘Cueva de los Cristales’ offers a stunning spectacle of numerous giant translucent crystals, the stay inside the cave might not be equally pleasant. The cave boasts a rare (yet stable) environment that is hostile to the humans.

The temperature inside the cave is steaming high and can go as high as 59 degree Celsius (136 degrees Fahrenheit). This extreme temperature is accompanied by a high level of humidity varying from 90 to 99 percent. Moreover, the air is acidic in nature and there is no way for sunlight to reach down here.

As a consequence, without proper equipment, a person cannot survive here for more than 15 minutes. Even with the special cooling suit that is worn by the visitors, the time limit inside the cave has been set to about 45 minutes.

How do the crystals form?

While these extreme weather conditions are very unsympathetic to humans, they provide an ideal environment for the crystals to grow. Around 26 million years ago, a Volcanic activity created the Naica mountain. This filled the mountain with “high-temperature anhydrite, which is the anhydrous—lacking water—form of gypsum.”

As the mountain got cooler, researchers believe that the cave was flooded with calcium sulphate enriched water, which reacted with the anhydrite, leading to the formation of these selenite-gypsum crystals.

Over the period of time, these crystals grew to abnormal sizes, thanks to the rare cave environment that has been stable for more than 10,000 years.

Why is the cave so hot?

The reason lies beneath the cave. The Naica Mine happens to be situated on a ‘set of false lines’. There is a magma chamber around 2.4 kilometers below the cave which heats it to such ‘scorching’ levels.

Opening a new horizon for science

The researchers and scientists have been actively studying the cave since 2001. Uranium dating technique has been used to determine the age of the crystals and the largest crystal in the cave is reported to be as old as 500,000 years. 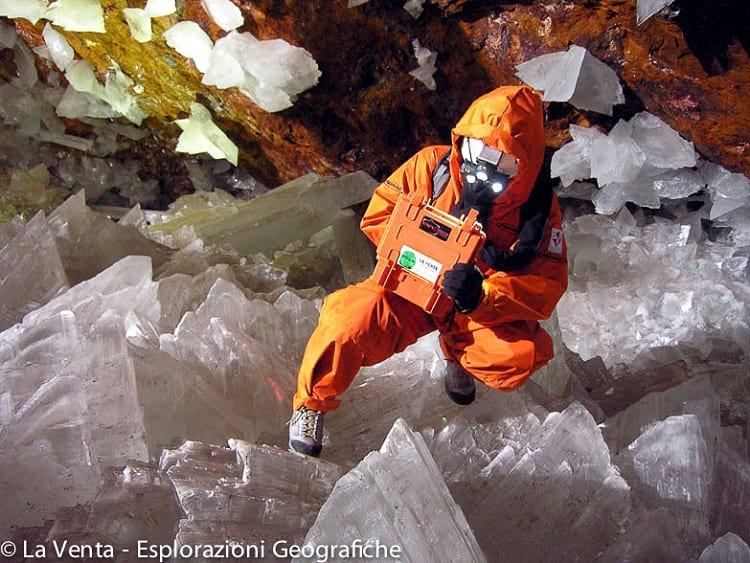 While the cave appears inhabitable, there is a lot of activity going on at microbial level. Microbial life forms that survive off sulphur, iron and several other chemical compounds have been found here. These microbes find no place in our existing database and are ‘alien’ to the scientists.

NASA’s Astrobiology Institute director, Penelope Boston, said that these ‘organisms are genetically distinct from anything known on Earth’. Most of these microbes have slowed their metabolism to extreme levels or are in a dormant state. “If the researchers who found them are correct, the organisms are still active,” says National Geography’s report on the microbial life found in the cave.

This can help NASA scientists to study the conditions on other planets and the subsequent possibility of life there.

The cave was re-flooded in 2017 allowing the crystals to return to their natural cycle and grow even further. During the 17 years of exploration, the cave was accessible to the researchers only due to the efficient pumping operations of the mining company that kept it clear of the water.

While the cave is flooded, one can enjoy the stunning photographs clicked by National Geographic photographers or can visit the ‘Astro Gallery’ in New York City, which has a thirty-two-inch long selenite crystal from the mine on display.