The Manchineel Tree: One of the Most Toxic and Dangerous Tree in the World 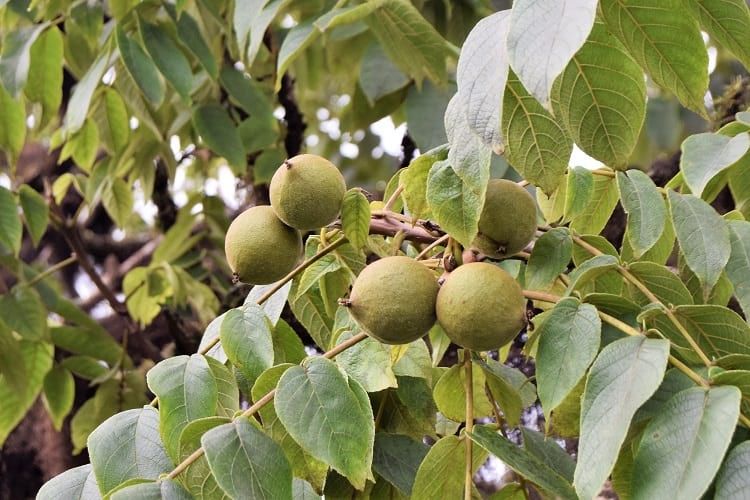 The fruits and leaves of manchineel tree resemble that of an apple tree. (Anne and David / Flickr) 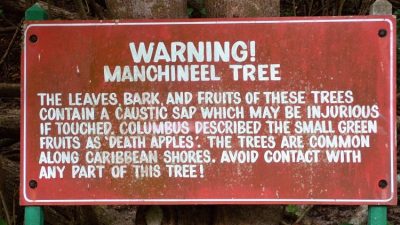 If you go to the Caribbean or to the regions around the Gulf of Mexico, you may come across thick clusters of mangroves along the shoreline. Amongst these trees, there will be the infamous evergreens known as the manchineel tree. The infamy comes from the fact that every part of this tree is extremely poisonous. All parts of the tree, including its bark, leaves, flowers, and fruits, contain toxins, some more powerful than others and some that have still not been identified. Coming in close contact with the tree can result in serious injuries and even fatalities. In many areas, the Manchineel trees are therefore painted with a red cross or a red band, along with notices to warn people to stay away from them.

The tree gets its name from manzanilla, which is Spanish for little apple. Spanish-speaking locals call it la manzanilla de la muerte or el arbol de la muerte, which, respectively, mean the little apple of death and the tree of death. Other popular names for the Manchineel are beach apple and poison guava. As the names might indicate, this isn’t a tree that the locals love and adore.

The Latin name for the Manchineel is Hippomane mancinella, and it belongs to the Euphorbiaceae or Spurge plant family that is spread all around the world in a variety of forms, ranging from shrubs to very tall trees. It may surprise you to know that the much-reviled Manchineel tree is a close relation of the popular Poinsettia. All plants of the Euphorbiaceae family have toxic sap. The level of sap toxicity varies, however, and the sap from some of the plants can be used for medicinal purposes; this is how Euphorbiaceae plant family came to be called Spurge, which is derived from the word purge, a reference to the laxative properties of the sap.

Physical characteristics of the manchineel tree

A flowering, evergreen, and a round-crowned tree that can reach up to 50 feet in height, the Manchineel has a reddish-grey bark and a trunk that can be around two feet in diameter. It has long-stalked, shiny, and elliptical leaves that are yellow-green in colour and about 10 centimetres in length. The leaves are simple, alternately arranged, and have serrated edges. The Manchineel produces small greenish-yellow flowers that appear in spikes. The fruit of the Manchineel resemble apples and are green or greenish-yellow when ripe. The hard stone inside the fruit contains six to nine seeds. Habitat of the manchineel tree

The Manchineel trees grow in sandy soil along the coast and in mangroves in brackish water and its deep-set roots are excellent for preventing soil erosion. It also serves as an effective windbreak.

Its habitat extends from the Caribbean to Northern, Central, and Southern America. In Florida, you will find the Manchineel in the mangroves of Flamingo in the Everglades National Park and around the Elliott Key and Key Largo islands. It is an endangered tree in the USA as most people would rather eradicate it than have such a toxic neighbour and also on account of rapid habitat loss.

The toxicity of the manchineel tree

While the Manchineel tree contains a variety of toxins, only some such as hippomanins, sapogenins, mancinellins, and physostigmines are known. Researchers still have to identify the others. Some of the toxins have an instantaneous effect, while others are slow to act.

The tree’s milky sap contains the organic compound, phorbol, of the diterpene family of esters. It is so toxic that even a drop of it on your skin can cause burns, blisters, and inflammation. The phorbol is also highly soluble in water. For these reasons, it is not advisable to stand under the Manchineel, and especially not when it rains. Contact with the sap can cause headaches, dermatitis, severe breathing problems, and eye-related problems.

The sap is so toxic; it can damage the paint on cars. Even burning the tree is dangerous as the smoke can poison you if you inhale it and it can also temporarily or permanently blind you.

As you might expect, the Manchineel fruits are not recommended for eating. While there are no reported deaths in recent times from eating the fruits, they could potentially be fatal. They are certainly hazardous enough. According to people who have tried them, the fruits taste delicious at first and then start to taste bitter and peppery. The person then experiences a burning sensation in the throat and the throat swells up and makes swallowing difficult. The pain is excruciating and can last up to eight hours. The person may suffer from gastroenteritis, bleeding, vomiting, shock, digestive tract damage, and bacterial infection. It may be necessary to hospitalize them. Some of the Manchineel toxins may even cause cancerous tumours.

Reason for the manchineel’s toxicity

Botanists remain mystified about why the Manchineel tree is so toxic to humans, animals, and birds. Only the iguana Garrobo (Ctenosaura similis), a striped, black-spined reptile of Central and South America, is known to eat the fruits and sometimes reside in the tree. 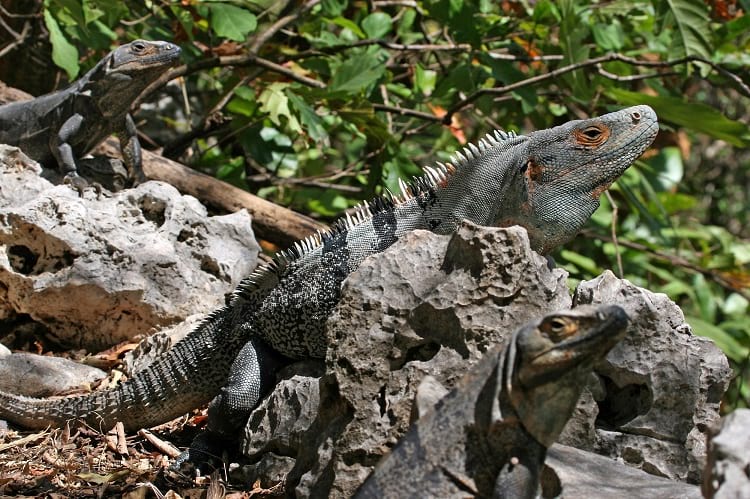 If you consider the issue from the evolutionary point of view, it is rather strange. Generally speaking, trees want other creatures to eat their fruits and thus help it to disperse and propagate their seeds. Since the Manchineel is so poisonous, there is no question of birds or mammals scrambling to eat it. How does it disperse its seeds then? In the same manner as the coconut tree. As the trees grow on coastal shores, they can easily drop their fruits into the water. These are then carried away by the water current and end up on another shore. The water rots the outer covering and the seeds germinate in the water-logged sandy soil and new plants spring up.

Uses of the manchineel tree

Despite its toxicity, the Manchineel tree is used to make furniture. The tree is burned at the base to topple it; you shouldn’t try cutting it with an axe as that can get the sap all over you. The cut wood is left to dry in the sun for several days to get rid of the toxic sap. Even so, it is necessary to be extremely careful while working with the wood. Wearing a mask is a must to avoid inhaling the sawdust.

Local people have traditionally used the Manchineel toxins from the dried fruits and extracted tree gum to make diuretics and medicines for edema.

In historic times, they used the Manchineel leaves to poison enemy water supplies and the Manchineel sap to tip their arrows for use in warfare. The Spanish conquistador Juan Ponce de León died after being shot with an arrow tipped with Manchineel in battle with the Floridan Calusa tribe. He first came to Florida in 1513 and then returned to seize it for Spain in 1521. His colonization attempt, however, did not go as expected. He met with fierce resistance from the Calusa warriors. One of them shot the sap-tipped arrow into Ponce de Leon’s thigh. The conquistador and his troops fled to Cuba and he died there on arrival.

It is not without reason that the Guinness Book of World Records has rated the Manchineel tree as one of the most dangerous trees in the world. If you should happen to encounter one, stay as far away as possible. This isn’t a tree you want to get up close and personal with.