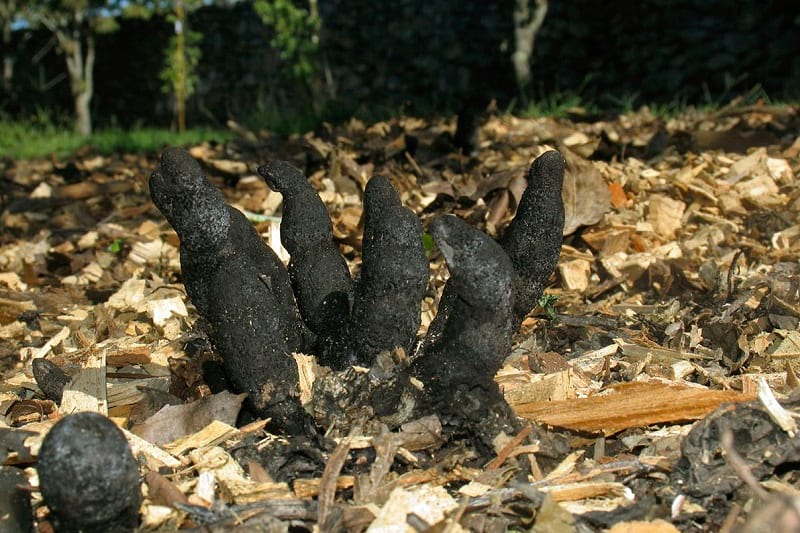 Saprobic fungi grow on and derive its nutrients from dead or decaying plants and tree barks. One such saprobic fungus is the Xylaria Polymorpha that bears an uncanny resemblance to the fingers of a dead charred human and hence acquired the name Dead Man’s Fingers. Typically, a fungus has several stages of growth and ‘mushrooms’ are the reproductive stage of the Xylaria Polymorpha. At this stage, it grows crooked and is yellowish on the tips, much like decaying fingers. 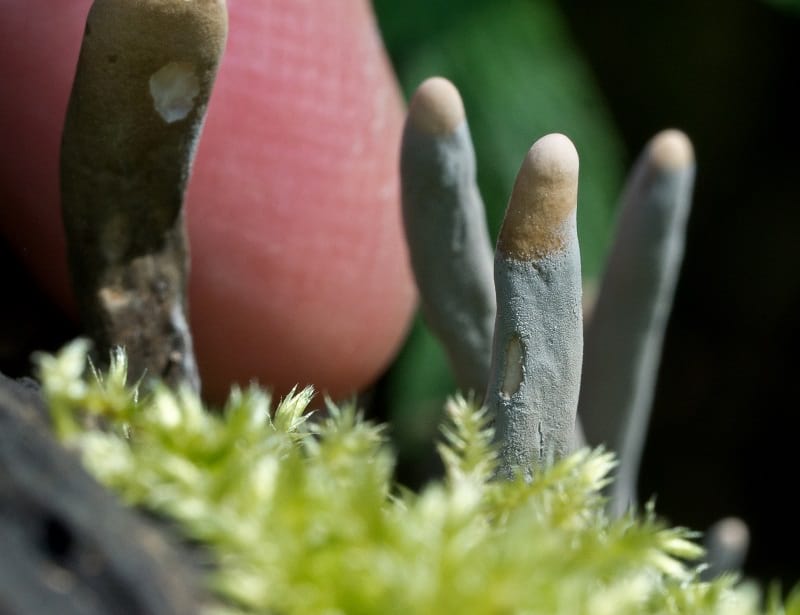 Where can you come across one?

Britain, Ireland and many parts of North America are home to Xylaria polymorpha. The fungus is generally found on the forest floors near remains of dead trees like apple, maple, elm and beech. Several factors contribute to its growth, the most decisive being temperature and moisture. Spring provides optimal balance and temperature for its growth, resulting in big clusters of the fungus around dead tree stumps. The anatomy of a dead man’s fingers

During its lifespan, it keeps changing its size and colour, which is how it came to be named Xylaria polymorpha,  meaning “many shapes”. As mentioned earlier, when young, it exhibits a pale bluish body colour along with a whitish tip. The coating of asexual spores gives its body a blue colour. After it gets a little mature, it attains a brownish-black colour with a coating of sexual, spore-producing, perithecia. It is during this stage that it resembles a dead man’s fingers, often during summer. And as it matures, it can grow up to a length of 14 cm and a thickness of roughly 5.5 cm.

The black coating donned by the mature fungi contains asci, which are essential to the production of the spores. This fungus belongs to the phylum Ascomycota, which is by far the largest section of the fungal kingdom. The spores of these fungi contain guttules—oil like drops and help in reproduction. Each ascus contains 8 spores. Interestingly, despite being a fungus, its texture is like that of wood and is hard.

Read more: Socotra Island of Yemen- The Most Alien-Looking Place on Earth

Why do they look so distinctive?

Wood is mainly composed of cellulose and lignin, with glucans acting as glue. The colours that are displayed by the Xylaria Polymporpha are because of rot fungi. White rot fungi consume or rather digest the lignin and white cellulose remains, hence resulting in the whitish tip during the pre-maturity stage. In the maturity and post-maturity stage, brown rot fungi digest the cellulose and only the brown lignin is remaining, due to which the brown and blackish colouration occurs as it continues to decay. It is precisely due to this appearance and the fact that Xylaria Polymorpha reaches out of the ground that it is called Dead Man’s Fingers. People who are not equipped with information about the fungi can easily mistake it for human fingers sticking out of the ground.

There are three species of Xylaria that are so strikingly similar to Xylaria Polymorpha, that they could be wrongly identified and mistaken for Dead Man’s Fingers. Xylaria hypoxylon is a species that resembles the entire anatomy of the Xylaria Polymorpha, except that it is distinctly thinner. On the other hand, Xylaria Longiana is completely identical to Xylaria Polymorpha with the exception of it having smaller spores. There is no other structural difference between the two at all. The differences between some species are so subtle that they cannot be distinguished when we observe them with the naked eye. However, they can be easily segregated based on lab examination of samples of their cultures. Interestingly, this holds true only for the mature mushrooms. At a prematurity stage, the fungi are practically indiscernible even under a microscope.

Similarities are also observed in the Cordycipitaceae family of mushrooms, but they are identified as parasites. Another group of similar mushrooms is known as Earth Tongue, but they do not form perithecia and are distinguishable from Xylaria Polymorpha on close observation. Although a lot of mushroom varieties are edible and find their way into various cuisines, the Xylaria polymorpha is inedible when it is mature and may have adverse effects on the human digestive system. There are, however, delicacies that are prepared with shavings of the Xylaria Polymorpha during its premature stage.

The Xylaria Polymorpha has found use in the indigenous Indian medical system of Ayurveda. The powdered fruiting body of the fungus is mixed with sugar and consumed by women after giving birth to promote lactation.

The fruiting body of the fungus is also the source of two polypropionates which have come to be known as xylarinic acids A and B. These acids have anti-fungal properties and helps combat against plant-pathogenic fungi.

Enjoyed this article? Also, check out “The Manchineel Tree: One of the Most Toxic and Dangerous Tree in the World“.

Previous Article
Assateague Island and Its Feral Horses
Next Article
Opinion: Muslim Women Have Been Critised for their Face Veils for Years. Now, We’re All Niqabis