The Kakapo, is a unique species of gigantic, flightless, nocturnal and ground-dwelling parrot, endemic to New Zealand, might just be the world’s most enigmatic bird. It has got an owlish face contour that lives up to its widely proclaimed epithet “the night parrot”.

The flamboyant Kakapos emerge every night dashingly from their shrouded daytime roosts, trudging over the fern-laced timberland floor, flexing their robust feet to climb up the tree canopy looking for fruits, flowers, seeds, shoots, leaves and tubers.

During the austral summer (from December to February), the male Kakapos throng at the display sites called leks to go after mates, and their rumbling screams can be discerned resounding through the backwoods for miles around.

Those buoyant calls, which today are rarely being heard, might have been silenced completely, had it not been for the persistent and painstaking efforts of a trickle of scientists and volunteers frantically trying to save the species from the threats of dire extinction.

Similar to various other unique birds in New Zealand, the downright obliteration of Kakapo is attributed to huge destruction of natural habitats and reckless entry of predators.

Likewise, its slow-moving reproduction pace and elaborate mating process which most likely filled in as an effective and normal populace control when predators were non-existent, have only accelerated its extermination.

The ground-nesting bird, which was at one time, spotted frequently in New Zealand, has now been almost wiped out because of loss in their habitat and invasive animals and rodents like cats, stoats, possums, weasels and rats that were brought in primarily by the European and Polynesian settlers to New Zealand and made easily accessible meals of both birds and eggs.

The new entrants thus turned out to be a very big menace to the flightless Kakapo, which already had its evolution in a land that was devoid of mammalian predators. This also made them thoroughly long-lived, with the oldest Kakapo almost reaching 120 years.

Another factor that is closely related to the near extinction of the Kakapo is the fact that they breed very infrequently. This is due to the reason that the rearing of the chicks is largely contingent on the fruits of the native trees like rimu and pink pine that come to fruition every 2 to 6 years and Kakapos breed only during these occasions.

As for the lean times, the Kakapo’s normal eating regimen comprises of grasses, herbs and coarse leaves which unfortunately lack the sufficient nutrients essential for the nurturing of the chicks and therefore, a big number perishes.

The species nearly vanished from the scene by the end of the 1980s.

The New Zealand Department of Conservation which is solely responsible for the management of national parks and other protected reserves had unveiled the ambitious Kakapo Recovery Program in 1989, basically to drive a colossal effort in boosting the Kakapo numbers to a healthy and stable level.

The project monitors and bands together for Kakapo care and safekeeping in three specific offshore islands namely Anchor, Codfish, and Little Barrier Island, the only possible places on this planet where Kakapo are currently known to remain in existence.

Until recently, there was a dearth of human settlements in these isolated islands. Even snakes, mammals or other predators were completely missing to devour these native birds or their eggs.

New Zealand adopted an extensive migration and security enhancement project as a means to come to the rescue of the imperilled Kakapo. The birds which were found to be thriving on inhabited islands of New Zealand were strategically and meticulously trapped and moved to the secure and sheltered islands where all the predators like feral cats and rats had been stamped out.

Only caretakers were allowed to dwell on these islands and human encroachment was strictly regulated. Even boats were prohibited from landing fearing ingress of rats. Environmental and Evolutionary Biologists from the University of Glasgow, who are currently working with New Zealand’s Department of Conservation, produced a special dietary supplement keeping in mind the principal aim to augment egg production of the remaining few Kakapo.

From 1995 onwards, workers associated with the Kakapo Recovery Program have been keeping a conscientious and vigilant monitoring of the population levels, providing nourishment and care to the birds with supplementary feed and herbage, safeguarding the Kakapo inhabited islands from the onslaught of invasive predatory creatures and on many occasions lending a helping hand towards the treatment and recovery of chicks that are underweight, malnourished or sick. 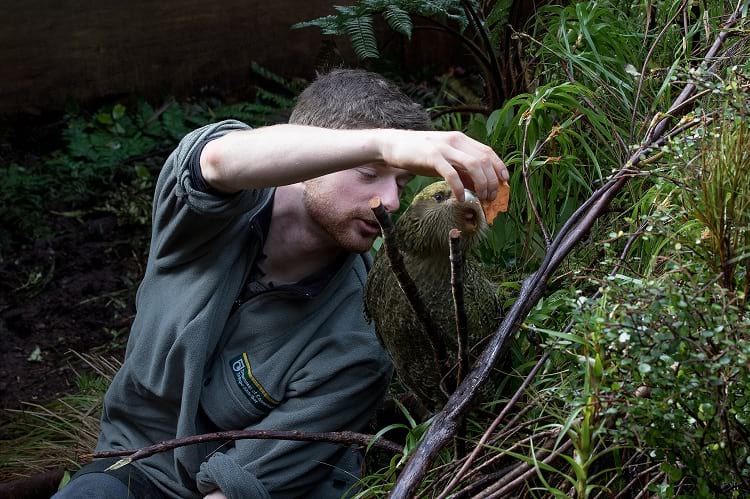 The distinctive nature of Kakapo and the restricted geographical ambit of these island species, by and large, had made them extremely unfortified to extinction. The program, therefore, placed a greater emphasis on the safeguarding of habitats, instead of captive breeding alternatives.

The breeding of Kakapo observed an impressive out-turn with the plans and initiatives formulated and put in place by the Kakapo Recovery Program.

To start with, Kakapo birds breed only when the pink pine and rimu trees in New Zealand yield an abundance of fruits whose berries are enriched with calcium and Vitamin D which are the vital nutrients for the settling birds and chicks.

The breeding was conducted on all the three islands simultaneously. Many Kakapos bred for the first time. All these factors helped in an appreciable increase in the total number of laid eggs.

Owing to the fact that the birds are vulnerable and fragile during the initial few months of their life, the Kakapo Recovery Program usually waits for round about six months since the hatching of the last chick to formally announce the number of surviving chicks to the aggregate populace.

Around 40 Kakapos have so far been rescued and 37 new chicks born, bringing the total number of surviving Kakapos to a relatively stable and sizeable 153, if not ideal as in 2018, spreading across the three predator-uninhabited islands. Stephen Bragg with a clutch of young kakapo parrots. (Department of Conservation / Flickr)

Decades later, officials now confident with an immensely productive recovery program profess that this new baby boom is perhaps the most successful population flare-up since the beginning of the program.

The wildlife officials assert that improvised technology such as remote nest monitoring and smart transmitters has also enabled them to keep tabs on the behavioural patterns of the birds without impeding their natural bearings and movement with hands-on contact.

However, the highly complicated reproduction system still continues to be a humongous challenge to control Kakapo’s sustainability and survival.

The latest technological innovations have substantially helped the team to increasingly look after Kakapo in a perfectly non-invasive manner, and as their population flourish, these distinct tools and their contribution will be crucial.

The great uplifting news about the Kakapo does not stop there. The birds have invited a fair share of additional support and recognition, thanks to some Imgur users who have put on show a lot of love and fascination for the Kakapo birds.

They have taken to populating the website’s opening page with umpteen numbers of Kakapo GIFs in a bid to spread awareness and adoration for the endangered species.

The torrent of Kakapo GIFs and the tagged links to the donation page of the Kakapo Recovery Program have given rise to donations crossing over 3000 New Zealand Dollars in a very short span of time.

Numerous books and publications describing the plight of the endangered Kakapo have been brought out in the recent past.

And now the charismatic birds on the rebound have caught the general public attention all across New Zealand and beyond. Not long after a Kakapo named Sirocco was gotten on camera trying to befriend a BBC photographer.

The bird spontaneously had a Twitter account of its own generated, attracting a massive following of 15,000 fans, which is an unforeseen but a welcome slice of publicity towards the efforts being delivered to salvage the bird from the brink of extinction.

Enjoyed this article? Also, check out “Himalayan Monal: The Nine-Coloured Bird of the Himalayas“.