1999: Jeanne Menjoulet’s Journey to the Dunes of Dasht-e Kavir 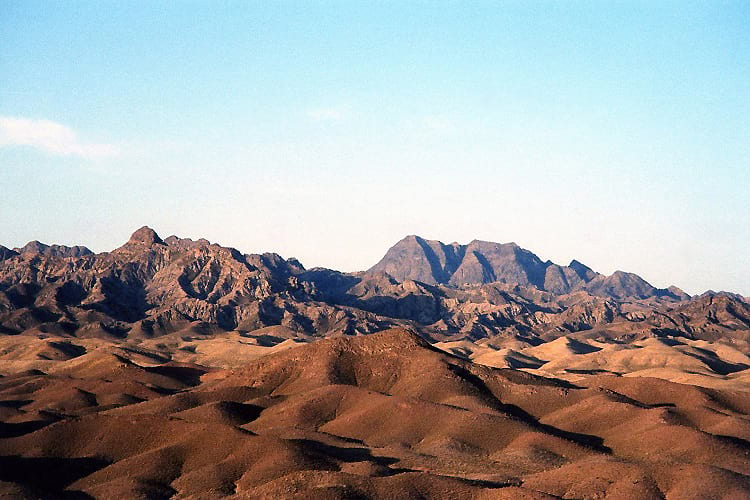 Landscape has changed considerably since modern humans (Homo Sapiens) first entered the world in what scientists believe was around 300,000 years ago. For instance, the Sahara desert became habitable (not just along the Nile Valley) most recently c.10,500 years ago when a burst of monsoons created a wealth of water.

Archaeological evidence in a now submerged area called Jebel Sahaba goes some way to illustrate this. Climate has also changed drastically in the Middle East, an area which these days is dominated by dry, arid regions.

In the past much of it was part of the Fertile Crescent AKA one of the infamous cradles of civilization. There have supposedly been many wet periods since then allowing civilization to flourish and pass through it onto new horizons. Many believe it was conditions like this which allowed early humans to first leave the continent of Africa around 60,000 years ago.

A testimony to these changing times lies 200 miles east of the capital city of Tehran, Iran. A great desert with a surface area of roughly 30,000 square miles, almost 2/3 the size of France. Its name is Dasht-e Kavir, part of a protected zone called the Kavir National Park. It is one of two vast deserts in this area, the other being Dasht-e Lut to the south.

The name ‘Dasht-e Kavir’ means ‘Low or Salty Plains’ in Classical Persian to illustrate how long it has dominated the landscape. It also highlights that there are many great salt lakes in Dasht-e Kavir, simply put, lakes which have a higher concentration of salt and dissolved minerals. The two largest are known as Kavir Buzurg and Namak Lake.

These salt-rich lakes have been created via rising temperatures meaning layers of salt remained, as much as 6-7 kilometers thick and 40 meters high. The salt has been there for millions of years and despite being covered at times by mixtures such as mud, the low-density of the salt means it will rise over most terrain. Much of the desert contains salt plates in a seemingly mad-made pattern but it is totally natural. 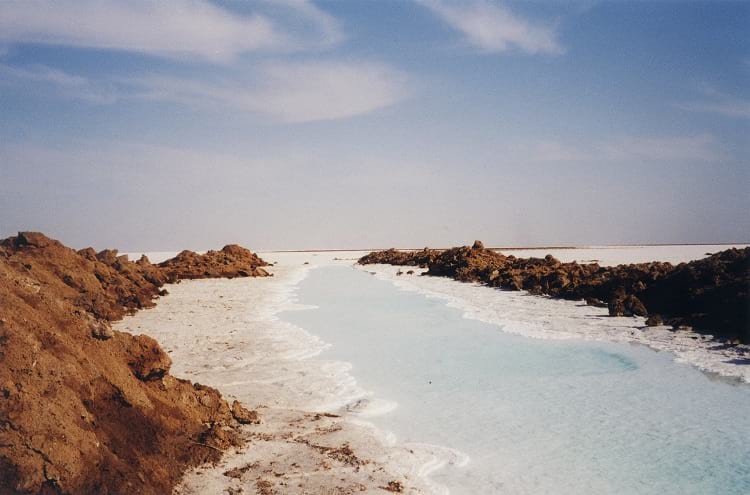 Wildlife and humans survive in the various terrains of the desert. Some plants at the high points and migratory birds searching for sustenance. Animals such as gazelle roam the earth as well as sheep, camels and goats. Becoming more and more endangered are beautiful creatures such as the Persian Leopard and Asiatic Cheetah.

In the night, wild cats, wolves, lizards and snakes favor the cooler temperatures. Few villages remain but those which do take their main sources of living from camel and sheep breeding. Settlements have to be located near springs and oases, water wells having been created underground for thousands of years are a necessity of life.

There is evidence from another archaeological site called Tepe Sialk which has inscriptions detailing a Queen’s journey on the lake, sailing to visit the ruler of a town within. It has evidence of inhabitation as far back as the 6th Century BCE, showing remains of mud huts, flint tools and skeletons. Ruins of a Ziggurat have been uncovered as well. The area is now almost completely uninhabited however, apart from a few isolated communities.

Legends tell of a historic section in the center known as the Devil Dunes – Rigg-e Jenn – which are said to be haunted. (Jenn being an evil spirit in Iranian culture.) This stems from the fact that many people have gone missing there due to its size and unpredictability– areas of sinkholes and quicksand included. Villagers speak of the wind howling eerily through the night.

Iran in 1999: Photographer shares her experience

While the big cities and towns have of course been modernized, the villages within the desert are the complete opposite. Both are extremely difficult places to have a concept of through pictures only and for that reason, at STSTW Media we got in contact with an adventurer and photographer called Jeanne Menjoulet who travelled to Iran in 1999.

Jeanne states about photography,“We can’t stop this elusive thing, time. I think that’s why I like photographs. Because it captures and freezes pictures of this fleeting time.”

We were so captivated by her documenting of Dasht-e Kavir as well as other places in Iran that we asked for an interview which she thankfully agreed to. We will share her pictures of modern cities such as the capital Tehran as well as the desert communities. Here are the questions we posed to her and more of her pictures.

STSTW Media: Tell us about yourself and about your passion for photography

Jeanne: “I am an amateur photographer. As for my professional activity, it deals with images too (I make videos about research into social history), But I prefer to devote my hobbies to capturing still images. The photographs fascinate me by their ability to make a moment everlasting. They also make it possible to observe life differently and to return to it … especially 20 years later.” 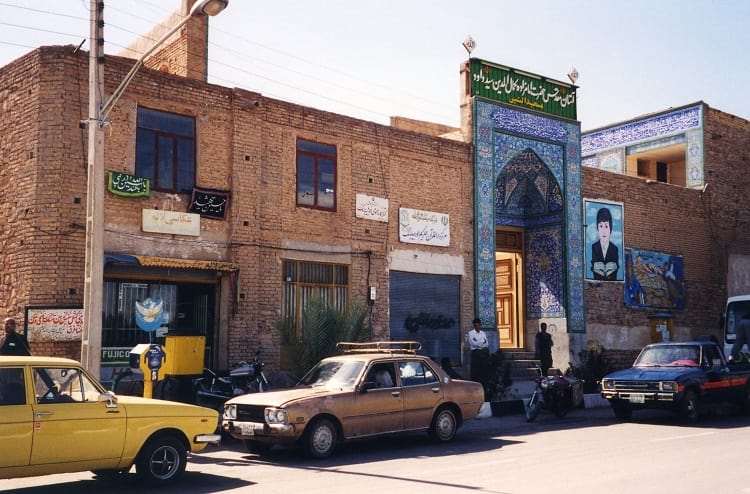 STSTW Media: Tell us about your experience (i.e the culture and hospitality of the region)

Jeanne: “I visited quite a lot of countries in different parts of the world (Europe, Africa, Asia, North and central America…), but I must say that Iran (in 1999) is the country where I felt people were the most welcoming. I mean, many of the people in Iran were curious and interested in an exchange with Westerners (we were repeatedly invited to tea in very different places, by people we didn’t know, we just met in the street) and I also felt this interest and hospitality in the discussions with the Iranians who spoke French. They were both curious about our culture and proud to show the Iranian culture and way of life. Unlike some foreign countries, this welcoming attitude was not motivated by money.” Jeanne: “I didn’t fear going to Iran in1999 (although I had a small aspect of adventure, before the departure) I wouldn’t fear at all going there now.  Many people in France (well, all the people I know) are quite impervious to Islamophobic speech. For many of us – I think – it is the war in Syria that is dreadful for people, and Iran is associated with this war.” 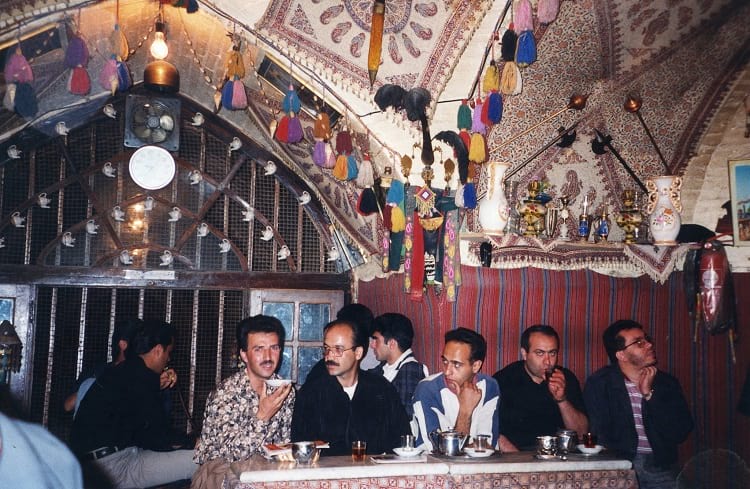 STSTW Media: How was communication? Did many people speak French or English?

Jeanne: “The communication with Iranian people was easier of course with people who spoke French or English. In the big cities I visited (Isfahan, Tehran…), many people spoke a bit of English at least. But the communication was also possible without language (with smiles, signs…). Even if it is always better to speak. But I remember a moment in an Iranian house (in a small village in the desert) which was very nice even we couldn’t understand our host and his family. I remember also two young women offering me a rose in a street of Isfahan, we couldn’t understand each other, but their smile was so friendly, I regret not having my camera in hand at that moment, for a “souvenir photo!” Generally, I took a lot of pictures of people in the streets or shops. And they smiled at me (perhaps because I smiled at them too), even If we couldn’t understand each other.” 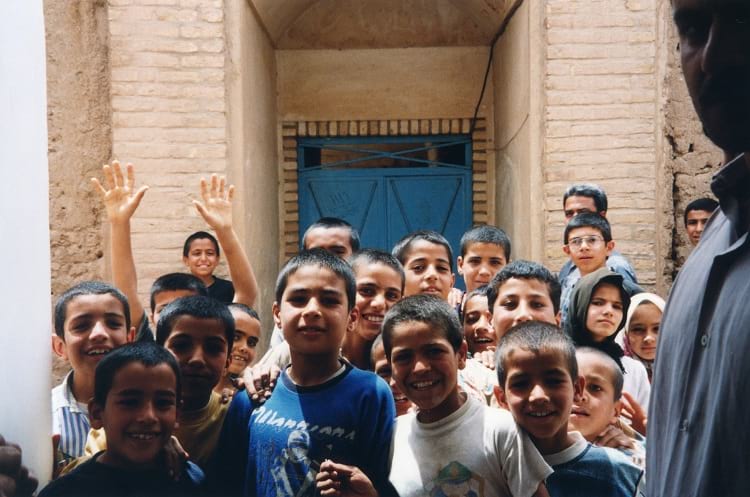 STSTW Media: Did you keep in touch with any Iranians you met?

Jeanne: “I didn’t keep in touch with Iranian people I met; I went there just before the spreading of the World Wide Web… One or two years later, I think I might have kept in touch by emails for instance, it is much easier than postal letters.”

STSTW Media: Which is your favourite photograph and why?

Jeanne: “It was in a small town (I can’t remember which one) near Isfahan. It was very funny, we took the cameras out of our bags exactly at the same time, and took the picture of each other at the same time.  This reverses the country’s tourist/inhabitant relationship. Interesting!” 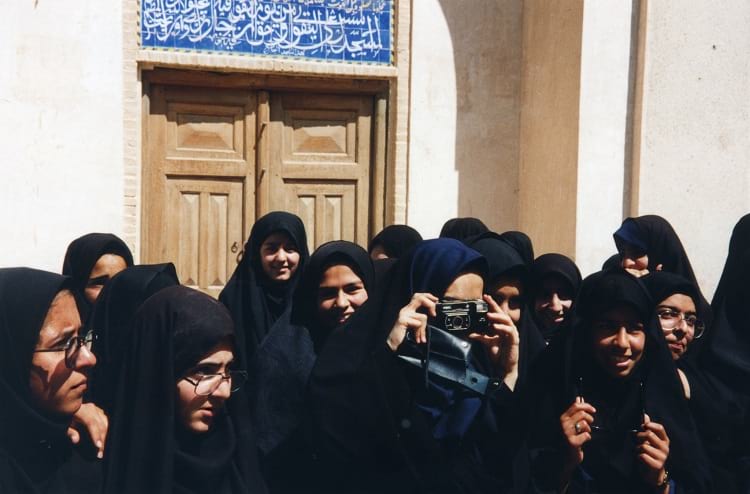 STSTW Media: What is your most memorable moment from the trip?

Jeanne: “My most memorable moment from the trip was visiting Machad during Muharram [First and holiest month of the Islamic Calendar] celebrations. It was incredible to see all the people in the streets, all in black. The processions were quite impressive, but there was a nice mood all around, a festive atmosphere, with smiles, once again” 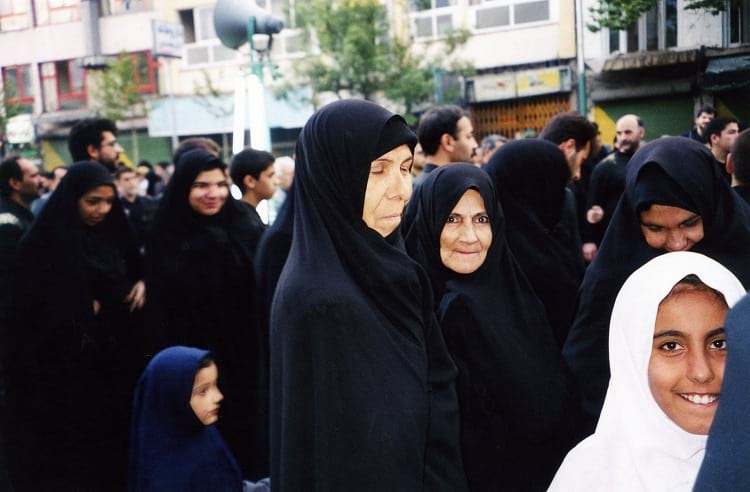 Some of Jeanne’s photography outside of the cities, and into the desert of Dasht-e Kavir. 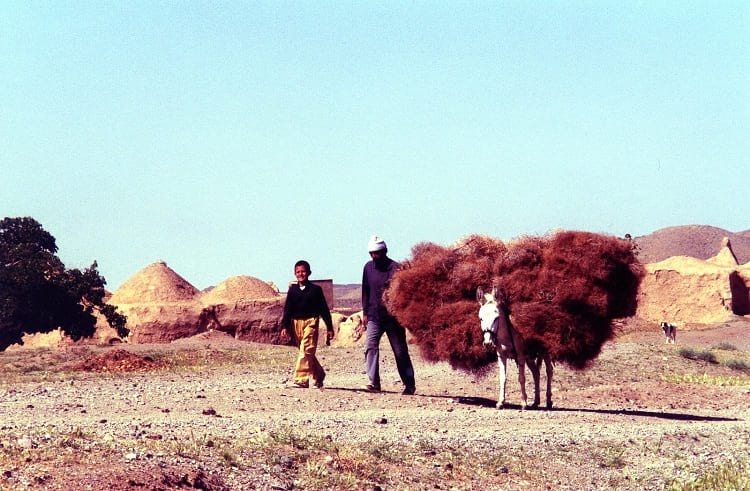 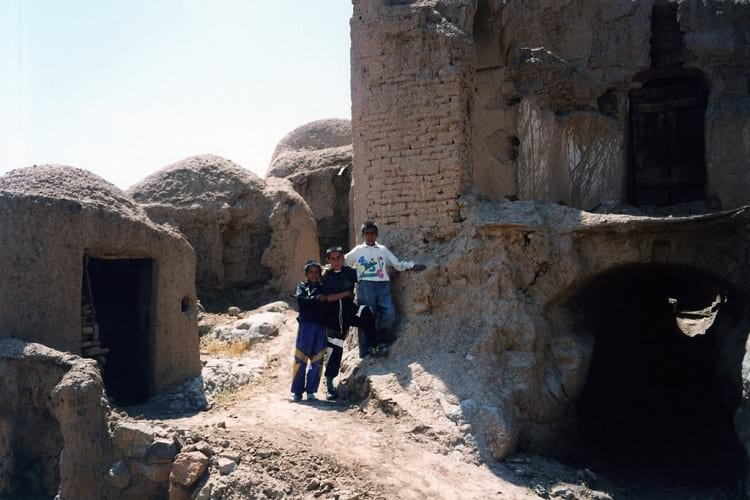 The troubles in many parts of the Middle East are well-documented and there is no doubt that climate change has contributed to that. The communities that remain in regions like Dasht-e Kavir are an inspirational testament to human nature. As photographer Jeanne Menjoulet says herself,

“An amazing insight into a world that has been completely transformed yet where life goes on. And a possible premonition into the future of many other regions.”

Previous Article
Can There Be a Better Closure to Old Age than Exile of Ubasute?
Next Article
Saving the Kakapo – The World’s Strangest Parrot