Jim Corbett: A White Hunter Who Became Saviour of Tigers 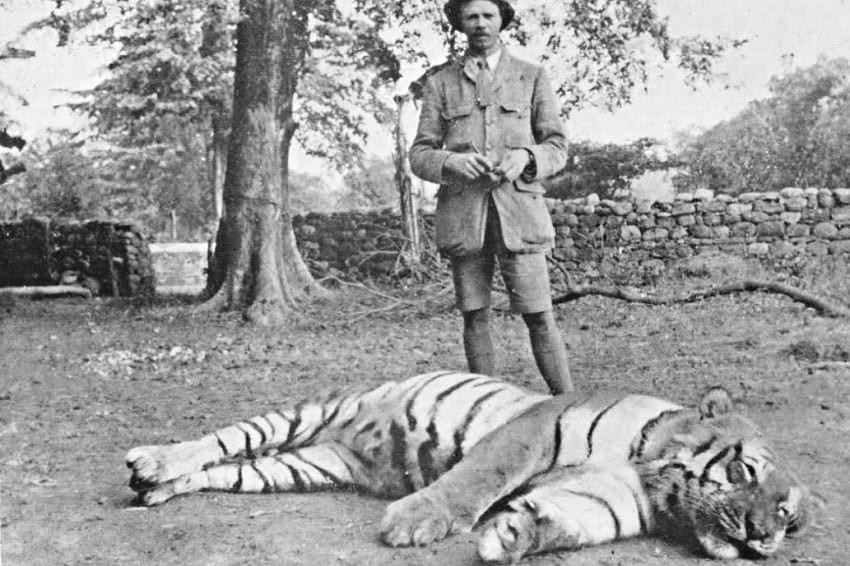 How many hats can a man wear in a lifetime? A railway employee, a contractor, a hunter, conservationist, family man, author, a celebrity, philanthropist, army officer, photographer. Jim Corbett, the British naturalist, born in colonial India as Edward James Corbett, wore all these hats. Tiger reserve of India, Jim Corbett National park, is a living testimony to this iconic Anglo Indian.

Jim Corbett was born on 25th July 1875, at Nainital, in the Kumaon of Himalaya (present Uttarakhand). He was the 8th child of William Christopher Corbett and Mary Jane Corbett (2nd wife). William had married Ann Morrow while serving as Captain in the British army, at Dehradun in 1845. Ann died 2 years later, after giving birth to 3 children. In 1859 William left army service and became a postmaster in Nainital. There he met Mary Jane, a widow with 3 children, and married her. The newlyweds then had 6 children to look after and would be blessed with 8 more in the future.

In 1862, William shifted to Nainital. His sister and her husband died, leaving behind 8 children, of which, 4 would live with the Corbett family. On 21st April 1881, William died of a heart attack, leaving Mary Jane with the charge of 9 children, including the 6-year-old Jim.

Born and brought up in a big joint family, bonhomie and camaraderie came easy to Corbett. He had his schooling at Oak Openings School (now Birla Vidya Mandir, Nainital) but left studies at 18 to shoulder the family responsibilities. In 1892, he obtained a temporary job with the Bengal and North Western Railway as a fuel inspector at Manakpur, Punjab. Later, he became a trans-shipment contractor at Mokameh Ghat in Bihar, overseeing the movement of goods across the Ganges. His dedication to the welfare of his family would keep him from starting one himself, and he remained a bachelor all his life. His elder sister, who too didn’t marry, remained his companion and soulmate.

Served in the army during the world war 1

During the world war 1 he joined the army and commanded a unit of 500 men (Kumaon Labor Corps) in France. Promoted to the rank of major, he commanded the 114th Labour Battalion, in the third Afghan war (1919). For 16 years, from 1920 to 1936, he spent quality time, hunting and tracking in Tanganyika (present-day Tanzania), Africa. By 1930 he grew weary of hunting and found a better calling: shooting animals with 16 mm camera. Photography gave him greater joy than shooting with a firearm. He gave up hunting and took up the cause of conservation of wildlife.

The defining part of Corbett’s career as a hunter, began with a Bengal tigress, in 1907. Killing it established his image as a devious hunter, and at the same time kindled in him an appreciation for wildlife. For, he realized that tigers turned man-eater when incapacitated due to injury or old age. The feline had lost two canine teeth to a bullet that failed to kill her. Unable to catch on her natural prey base, the big cat turned to an easier option – killing humans for food. Champawat had claimed 436 human lives and was a reigning terror in Kumaon area in 19th century India. Attempts at containing the cat had failed, and a jittery British government commissioned Jim Corbett into the task. Following a tip-off, he reached the village Champawat and saw remains of a woman victim. A human chain was formed to force the animal to move into anambush. A trap was laid and the tigress was shot down in a daredevil encounter. That was the end of the tigress, posthumously named as the Champawat man-eater. 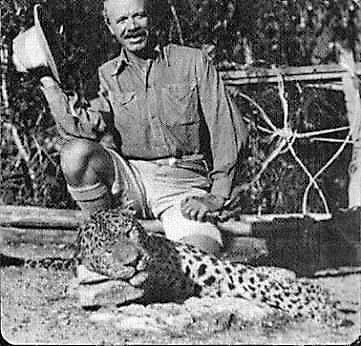 Jim Corbett with the Leopard of Rudraprayag. (Wikimedia Commons)

Another credit for Jim was Panar Leopard (1910) that killed about 400 people. Jim’s first attempt was an anticipated shot in the dark. The hit animal was tracked in the wood with searchlights and killed in the second attempt.

Talla-Des man-eater that claimed 150 human lives in a span of 2 years, was exterminated it in 1929. Her two grown-up cubs were also killed. The man-eater was spotted through a blood trail leading to a thicket of ferns. Two rounds of bullets fire killed the animal on spot.

“When I saw the two tigers lying asleep I concluded that the man-eater had found a mate, but later, when my third shot flushed a third tiger, I knew I was dealing with a tigress and her two cubs. Which of the three was the mother and which the cubs it was not possible to say, for all three looked about the same size when I had viewed them over the sights of my rifle….The cubs had died for the sins of their mother.”

Man-eating leopard of Rudraprayag had killed 125 villagers. Leaving human bodies unburied in epidemics had (including Panar leopard) hooked it to the human flesh. Jim eliminated it in the year 1925.

Mohan man-eater, a terror in settlements of Kosi valley was killed in 1929. The tiger was sleeping. For once Jim reflected on ethics of gaming a sleeping life. But the fact of its being a man-eater prevailed.

A group of 3 man-eaters from Kumaon division, reported in 1929, was the next pick. The hunt led to Chowgarh Tigress and her grown-up cub, responsible for 64 killings. Jim began his hunt from Kala Agar forest. In his first attempt, the cub got killed. The thread of the mission was picked up in February 1930. Buffaloes, used as bait attracted 2 tigers and 2 leopards which were not man-eaters but got killed under that impression. The dogged search for the man-eater concluded on 11th April 1930. Jim suddenly found himself dangerously close to the man-eater. The tigress, just 8 feet away, could pounce on him any second. Jim gathered his wits and shot the animal dead. By any reckoning, it was the toughest challenge he faced in his lifetime.

Chukka man-eater was a male Bengal tiger that killed 3 boys of village Thuk in Ladhya Valley in 1937. After repeated attempts, it came under the firing range of Jim, perched on a tree at a strategic location. Two bullets were fired and the animal fell lifeless. This was 2nd last in Corbett’s man-eater kitty. The last one was the Thak man-eater, a Bengal tigress that killed 4 humans in 1938. It fell to Jim’s on 30th November 1938.

His experience as a hunter made him a lover of wildlife

Increasing empathy towards the wild during his hunting days made Corbett a staunch conservationist and he took up the cause of protecting wildlife from human interference. He worked tirelessly to establish Hailey National Park in 1936. The park, a beacon light of conserving forests and the wildlife, was later renamed Ramganga National Park and finally, after his name, as Jim Corbett National Park in 1957. Jim Corbett authored 6 books penning his life experiences and conveying his message of living in harmony with nature.

Located in scenic surroundings of Himalayan foothills and the Shivaliks, Jim Corbett National Park is a popular tourist destination in India. Spread in an area of 520 square kilometres at Nainital, Uttarakhand, it is home to a wide spectrum of wildlife. Project Tiger, launched in 1973 for the protection of the endangered species of Asian tiger, began from here. It is home to 650 species of birds and 5 species of deer. A good number of otters, crocodiles, elephants, pigs, tigers, leopards, bears and reindeer etc. make it a vibrant exposition of wildlife in its natural surroundings. Visitors to the park, go in a jeep/canter safari to see the wild in its pristine form.

Two houses of the Corbett family are tourist attractions

The winter house of the Corbett family was located in Kaladhungi, a forest area in the Himalayan foothills, popularly called Corbett’s village. The house was converted into a museum in 1967. Another house of Corbett’s, on the slopes of Ayarpatta hill in Nainital, named Gurney house is now owned by Varma-Dalmia family. Visitors to the national park, however, allowed to see this heritage home.

In 1947, Jim Corbett, along with his elder sister, left India for Kenya, where he died at the age of 80. Corbett’s illustrious career has its own share of criticism. Some scholars feel he was just an extension of India’s colonial masters who raised hunting as a popular sport. This led to hunting on a wider scale. A large number of tigers survived a shoddy hunt, to live with injury and incapacitation. Such injured felines, they aver, turned on human beings. And, Jim was strategically positioned as the saviour of the forest dwellers. His positioning as a friend of villagers won the British government the goodwill of the local population. Those were the days of India’s freedom struggle when the colonial rulers were generally doubted by the Indians. Some have accused Jim of exaggeration in his writings. Another criticism is in respect of an Indochinese subspecies of tiger, panther tigris corbetti. The name, it is argued, is not after Jim Corbett as claimed by many. Actually, it is after a Researcher of Natural History, Gordon Barclay Corbet (Jim Corbett has ‘tt’). Jim has also been accused of killing many felines which were not man-eaters, and killing just for sport.

Nevertheless, his image as one who saved men from tigers, and subsequently tigers from men, survives controversies. Villagers loved him and admired him in spite of being a white man. He is still fondly and reverentially remembered by the inhabitants of the places where he lived and worked. This, coupled with the body of work he gifted to the posterity, will keep Jim Corbett immortal in the annals of history.

Previous Article
The Extraordinary Exocoetidae – The Flying Fish of the Tropics and Subtropics
Next Article
Anti Tank Dog: The Soviet ‘Masterplan’ that Backfired to Disastrous Effects