The Tsavo Man-Eaters were a couple of lions that belonged to the Tsavo region, and were responsible for the death of several construction workers in the area. The pair of man-eating lions were infamous for their characteristic manner of attacking and killing people. They went on to attack and devour approximately 135 people, all of who were working on the Kenya-Uganda Railway, just within the span of a few months- in 1898 from March to December.

History of the Tsavo Man-Eaters

As far as history recalls, Tsavo lions have always been known to be man-eaters. While they are smaller than the Serengeti lions that are found to the west of Mount Kilimanjaro, Tsavo lions are more ferocious and known for their notorious deviancy. They have sparser to practically no manes because of the harsh environment they live in. A pride of Tsavo lions are usually smaller and consist of only one male having breeding rights and about 10 females.

In earlier times, when slave trading roads were developed from Tsavo to get to Mombasa for the Arabian slave caravans, quite often some of the slaves would die or be on the brink of death. In such cases, the slaves would be left behind, and would become prey to scavengers. It is believed that these instances were responsible for giving the Tsavo lions a taste of human flesh, which would later become a serious problem in the 19th century.

Samuel Kasiki, who is the deputy director of the Biodiversity Research and Monitoring, and is associated with the Kenya Wildlife Service said,

“The death rate was high … the bodies of slaves who died or were dying were left… So the lions may have gotten their taste for human flesh by eating the corpses.”

The reign of terror of the Tsavo Man-Eaters

In March 1898, the British Lieutenant Colonel General John Henry Patterson visited Kenya, with several Indian workers accompanying him. He intended to build a bridge over the Tsavo River, which was supposed to be a part of the Kenya- Uganda Railway Project. 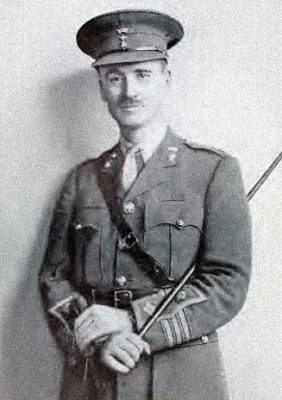 According to Bruce Patterson (not a relative of John Henry Patterson), who wrote a book called ‘The Lions of Tsavo’, the project was doomed from the start. He wrote in his book, “Few of the men at the railhead knew that the name itself was a warning.” Tsavo meant ‘place of slaughter’ in their native language. It was considered to be a bad omen and was a reference to the several killings by the people of the Masai tribe who would attack tribes that were much weaker than them.

Soon after Lt. Col. Patterson and his workers arrived, it came to their notice that their porter had gone missing. A search was conducted almost immediately when the people came across the devoured and mutilated body of the porter.

In his book “The Man-eaters of Tsavo”, 1907, Lt. Col. Patterson wrote about the terrible sight. He wrote,

“On reaching the spot … a dreadful spectacle presented itself … covered with blood and morsels of flesh and bones”.

This was an account of his first encounter with the Tsavo Man-Eaters. Then and there, he had resolved to rid the region of these vicious creatures no matter the cost.

Patterson had experience hunting tigers back when he was in India, and was well-suited to put a stop to the notorious lions and their activities. He came up with various methods to try and put a stop to the two man-eating Tsavo lions. Patterson put up barriers of thorns, lit bonfires at night, and became extremely vigilant and gave orders for curfews. However, none of it really yielded any results, and almost as though it had provoked the deadly duo, the attacks only got more gruesome.

The lions would attack the camps of the workers at night, and drag them out of their tents to devour them. According to most reports, the ferocious predators were believed to have killed at least 135 people that year. However, the official company reports say that the official number of deaths is close to 40.

One of the people who were working on the railway project wrote, “Hundreds of men fell victims to these savage creatures … left not a trace behind them.” The two lions were named ‘Darkness’ and ‘Ghost’ because of their stealthy nature while hunting their prey at the dark hours of the night.

The end of the Tsavo Man-Eaters Colonel Patterson with the first of the two Tsavo man-eaters after being shot. (Field Museum / Wikimedia Commons)

Despite all his efforts, it took Lieutenant Colonel Patterson several months to kill the two Tsavo lions that had been on a rampage. Patterson killed the first lion on December 9, 1898, and it took him another three weeks to hunt and kill the second one. 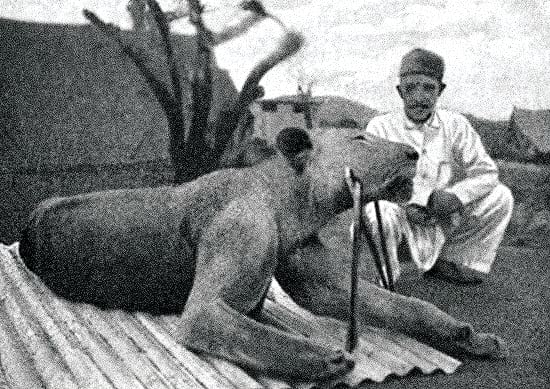 The second Tsavo lion after being shot. (Wikimedia Commons)

Upon the death of the lions, it was found that the two lions had gone rogue and did not belong to any particular pride. Both of them had no manes, and each of them was a little more than nine feet long. However, in comparison to the other lions in the area, the two predators were much larger in size. This may have been due to the excessive amount of food that they had gained access to.

With the looming threat of the lion attacks vanishing, the workers resumed the project and the bridge was completed in February 1899. Patterson was hailed as a hero, and he kept the skin and the skulls of the two lions. He later sold them for $5,000 to the Field Museum of Natural History in Chicago, where they were stuffed and put on display for visitors, and continues to remain there till date. 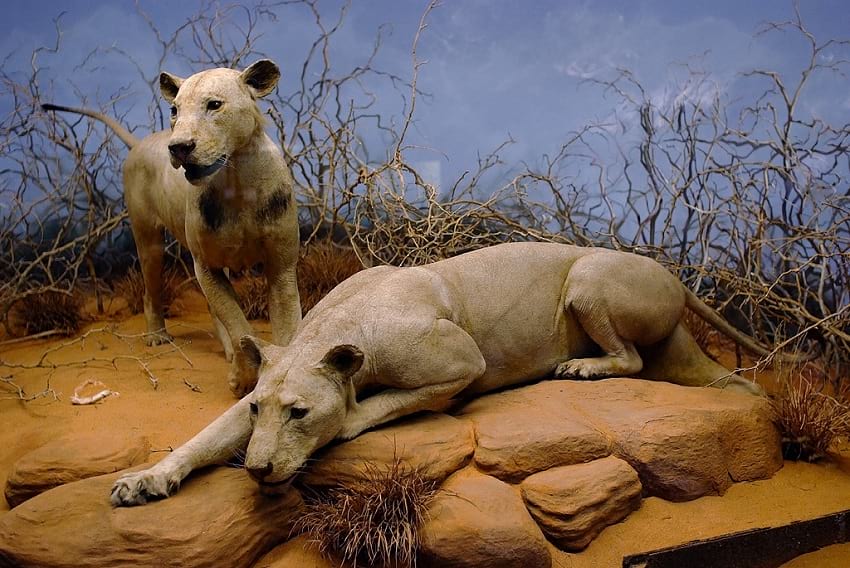 According to Bruce Patterson, who is a zoologist at the museum in Chicago, several chemical tests have been conducted which revealed that the lions had eaten exclusively human flesh for several months before they had been killed.

However, there is not much difference between the Tsavo lions of present-day and the lions from the 19th century. Patterson said that they attack people for the same reason as before – “our encroachment into what was once the territory of lions.” Modern research has, however, pointed out that the reason behind the man-eating tendencies of the Tsavo Man-Eaters could have been due to their poor dental health. Sporting multiple injuries within their maw, it must have been difficult for them to catch their regular prey in the wild, and thus resorted to pouncing on the much-less-agile and often less alert and readily available humans in their territory. The skulls of the infamous Tsavo Man-Eaters. (Superx308 / Wikimedia Commons)

Enjoyed this article? Also, check out “Mapogo Lions: The Six Legendary Lions That Meant ‘Bloody’ Business in Their Quest for Dominance“.

Recommended Read:
The Man-Eaters of Tsavo | By John Henry Patterson