The Extraordinary Exocoetidae – The Flying Fish of the Tropics and Subtropics 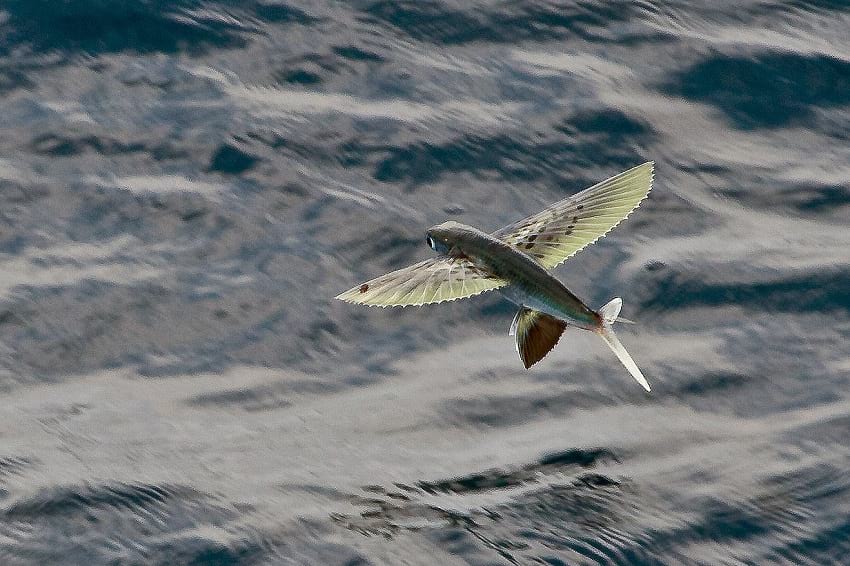 Known commonly as flying fish, the Exocoetidae are oceanic fish that are widely found in the tropics and the subtropics. They are renowned for their ability to launch out of the water and glide in the air to escape predators. With their streamlined bodies and wing-like fins, these small fish can cover extensive distances, some of several thousand feet, while they are still air bound.

The word Exocoetidae comes from the Greek language and means “to lie down”. The ancient Greeks, who observed the fish leaping out of the water, either assumed that they left the ocean to sleep onshore or used ‘sleep’ as a simile for dying. Many of these flying fish leap so high that they often land on boat decks and, stranded thus, die there.

While these fish inhabit all oceanic bodies, they appear to have a marked preference for tropical and subtropical regions. Also, they are mainly found in the epipelagic zone, which is the ocean’s upper layer and which extends down to a depth of around 656 feet. The sunlight that enters the ocean can reach down only as far as this layer, and that is why the epipelagic zone is where most of the marine life generally thrive.

The flying fish feed on plankton and other tiny marine creatures. In turn, they are prey to tuna, marlin, squid, porpoises, dolphins and other marine animals. While they leap out of the water to get away from these predators, it is not a very foolproof method of escape. Seagulls and other marine birds are always on the lookout for the Exocoetidae and swoop down to grab them in mid-air.

Physical features of the Exocoetidae

In size, the Exocoetidae are small, measuring from seven inches to up to 10 inches to 18 inches in length.

The reason the Exocoetidae are able to make such high leaps and glide over long distances is due to morphological features such as broad neural arches, a sturdy and well-developed vertebral column, and enlarged pectoral fins. Some species of flying fish also have enlarged pelvic fins to assist them better in flight. The fish’s torpedo-like body shape is also conducive for flight. 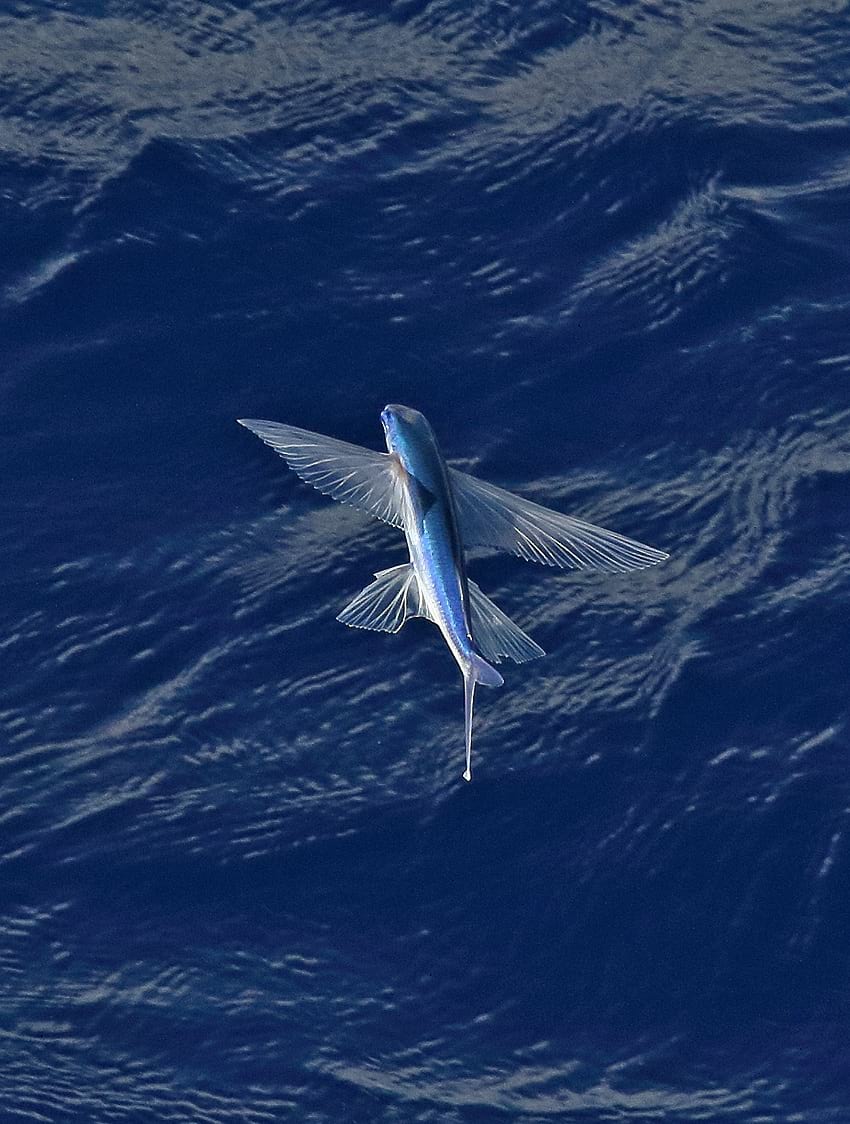 The fish’s ligaments and connective tissues converge into the broad neural arches. These skeletal connections from the cranium to the vertebral column strengthen the vertebral column and confer a rigidity on it that is ultimately beneficial for the fish’s glided flight. It is similar to the aerodynamic principles that make flights possible for planes. With their bodies rigidly held, the Exocoetidae are able to lift out of the water and glide forward in the air faster.

As they glide, they spread their pectoral fins wide and the curved, wing-like shapes of these fins enable to increase their gliding time and also to take advantage of the air drafts created by the oceanic currents.

Do the Exocotidae really fly?

Flying fish don’t actually fly in the way birds do. They cannot flap their pectoral and pelvic fins while in air. What they do is propel themselves out of the water with a powerful leap. To make this leap, the Exocoetidae beats its tail very rapidly from side to side and uses the momentum to thrust out of the water surface. They then spread their pectoral fins wide in the air and use them to glide over the water surface. Flying fish propelling itself forward by wagging its tail-fin left and right. (NOAA)

With these fins and their streamlined torpedo-like shapes, the Exocoetidae can generally cover distances of around 160 feet at heights of 20 feet over the ocean surface and at speeds of 70 kilometres per hour. If they manage to catch a favourable oceanic updraft, they are able to glide even further. Researchers have observed flying fish gliding for as far as 1300 feet.

There are various reasons why the Exocoetidae make these long glides. It may be to escape predators and, perhaps, also to move to newer feeding grounds in the shortest amount of time.

Flying fish as a delicacy

As mentioned earlier, flying fish are found in tropical and warm subtropical waters. Some of the countries in these regions include India, Bangladesh, Japan, Vietnam, Indonesia, Taiwan, China, Venezuela, and Barbados. In nearly all these countries, the Exocoetidae are fished and considered a culinary delicacy.

The fish is consumed in a variety of ways. In some areas, it is dried to preserve it and the dried fish is then used to make broth. The Japanese use the roe or eggs of the flying fish to make sushi; they call the roe tobiko. In Barbados, the locals use the flying fish to make a dish called cou-cou; it is the country’s national dish. 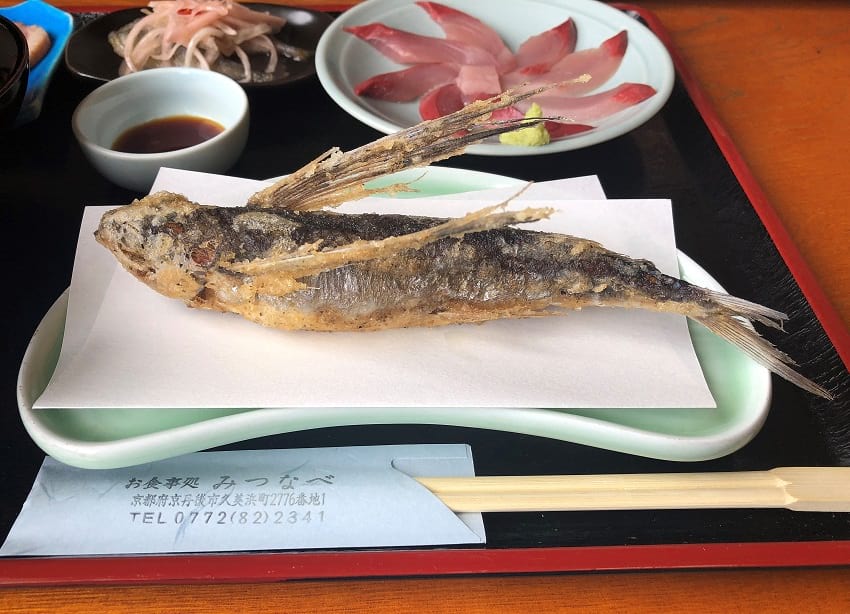 The numbers of Exocoetidae around Barbados have decreased drastically in recent times. Ever since the Bridgetown Habor opened, ship traffic has gone up in the area. The pollution caused by the ship fuel has had a negative impact on the surrounding coral reefs and this, in turn, has affected the fish population. Overfishing is another reason why the ocean waters no longer teem with Exocoetidae. You are more likely to see the fish near Tobago, which is around 220 kilometres away than around Barbados.

Interesting facts about the Exocoetidae

Enjoyed this article? Also, check out “Hoosier Cavefish: The Blind Cavefish from Indiana Named after Their NCAA Basketball League“.

Previous Article
Martin Laurello: The Astounding ‘Human Owl’ Who Could Turn His Head Around By 180 Degrees
Next Article
Jim Corbett: A White Hunter Who Became Saviour of Tigers