Iron Lung: The History of the Present Day Breathing Machines The act of breathing, per se, is a mechanical activity. It begins with the expansion of the chest. Expansion creates negative pressure in the chest cavity, thereby in the lungs located therein. As the air always flows from positive pressure to negative, outside air rushes into the lungs. Then the chest cavity contracts, forcing air out of the lungs. If breathing stops for some reason, and for long, death follows. In such an emergency, a machine intervenes to revive breathing. This machine is called ‘Iron Lung’.

The breathing machine is a metal tank that takes in the entire human body except for the head which must be kept out. By creating positive and negative pressures, it forces the chest cavity to breathe-in and breathe-out. Thus the patient with difficult breathing is facilitated to breathe easy (artificial respiration) during the critical period of illness/disability.

How does an iron lung work?

The idea of iron lung became relevant in the year 1670, when John Mayow, an English Physician, gave a practical demo of the process of breathing. He prepared a model of bellows with tugged-in bladders. As the bellows expanded, the bladder within got filled with air. When bellows were compressed, bladders got emptied of air. Breathing, he demonstrated, was based on the process of ‘External Negative Pressure Ventilation (ENPV)’. Similar experiments were repeated by Dr. Woillez in 1876, and Dr. Stewart in 1910, and the principle of ENPV was established beyond doubt.

Used in medical emergencies in 1920

A reference is found to the use of the word ‘Mechanical Pump’ during the poliomyelitis epidemic of 1920. It was a metal box wherein a patient’s body could be laid for artificial respiration. The term ‘Iron Lung’, it seems, was used for the first time for the above said Mechanical Pump.

Based on the principle of ENPV, Philip Drinker and Agassiz Shaw of Harvard created iron lung in 1927. The same year it was used for the patients of polio and chest paralysis at Bellevue Hospital, New York. It was iron boxes with 2 inbuilt vacuum cleaners, capable of creating a regulated push and pull on the chest cavity. Subsequently, John Emerson improvised on it to cut manufacturing costs and increase the working efficiency.

In the 1920s, iron lungs were tried and tested on cats. Based on these experiments, Dr Philip Drinker and Louis Shaw built a wooden version of the iron lung. It looked like a drawer. The pressure in the drawer was created by the use of syringes. Tried and Tested breathing machine was then used on children suffering from infantile paralysis.

In 1926, Dr. Drinker improvised this wooden contraption by using iron syringes and called it ‘Iron Lung’ on that count. This machine revived a serious case of polio, unable to breathe properly. The patient was revived successfully, but unfortunately, died on account of pneumonia. Another patient put iron lung recovered completely. Thus it was clearly established that iron lung helped a patient significantly. About a thousand iron lungs were being used in America by 1930.

No wonder, in the 1930s, iron lungs were called ‘Drinkers’ as a mark of respect for Dr Philip Drinker for his pioneering work on breathing machines. Industrialists and philanthropists then increasingly came forward to sponsor better and better versions of the iron lung. These included a hinged opening in an iron box, aluminium version and rotating version. In 1931 Dinker’s design was improved by John Haven Emerson. He provided for the patient’s bed to slide in and out of the iron lung. Also, vents were created on sides to feel the patient’s body without tampering with the air pressure of the machine. Interestingly, Emerson was dragged to court by Drinker for trespassing on his patent. Emerson’s lawyer argued that there was nothing novel in Drinker’s machine and hence, the patent was invalid. Judge not only ruled in favour of Emerson but observed that lifesaving technology must be shared as much as possible.

In 1937, a polio epidemic broke out in Australia. Import of Drinker’s machine from America being prohibitive, Edward Both, Australian biomedical engineer was roped into finding a low priced alternative. He prepared plywood edition of respirators. This design of breathing machine impressed Lord Nuffield, the English Motor manufacturer, immensely. He got about 1700 plywood respirators built in his automobile plant and distributed them free to hospitals worldwide. In 1952, the USA had a record number of 57,628 cases of poliomyelitis (polio). The disease causes muscular paralysis, and if chest muscles are involved, the patient dies on account of the inability to breathe. In such conditions, obviously, the iron lung was indispensable. Iron lung ward in a hospital in Downey, California, circa 1953. (FDA)

Experience of the iron lung

Its life-saving quotient notwithstanding, the iron lung was anything but a pleasant experience for the patient. That’s understandable as they would be administered medicines and cared for in restricted space that the respirator permitted. Often such intervention called for stopping the machine and forcing patient breath on her/his own with a calculated risk. Monotony was a problem too. The patients were kept in good humour by providing a face mirror, a dangling book that could be read with assistance and an exclusive ward where they could talk to each other while interned in the iron lung. Children were primed for the task by explaining the procedure with the help of a doll. 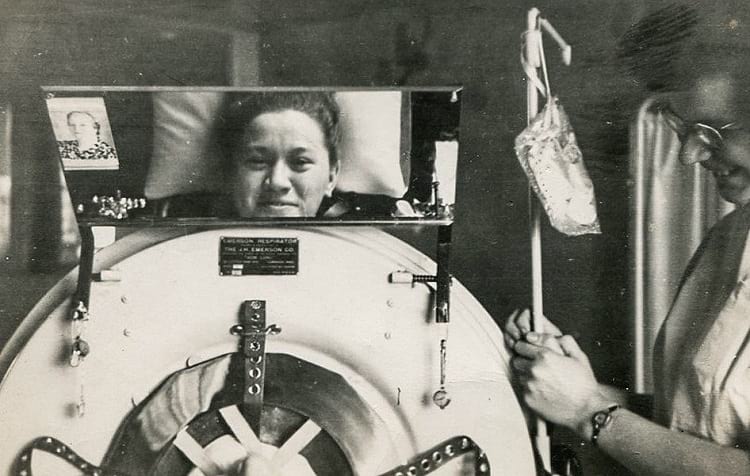 A woman in an iron lung looking at herself from the mirror. (oakenroad / Flickr)

Weaning from the iron lung was a task too. Full recovery could take up to 2 years during which the patient was carefully watched and assisted with physiotherapy.

Respirators and ventilators are the modern versions of the iron lung

As of now sophisticated machines called respirators and ventilators are in use. Since Polio is generally eradicated, these are used in emergency wards and the intensive care units. And of course, these are patient-friendly and pose no hindrance to ancillary medical care and interventions. Ventilators have become a surgical necessity since the 1950s when muscle relaxants began to be administered along with anaesthesia. Naturally, breathing muscles of the anaesthetized patient went limp and hence ventilators became indispensable for surgery.

Modern ventilators are a system of an electric pump, humidifier and a breathing tube. The tube is put into the patient’s mouth or nose (invasive intervention). The electric pump sucks in outside air, and humidifier adds moisture to this air. Positive pressure generated by machine pushes a fixed amount of air into the lungs for a fixed duration of time. The second step, the exhaling of breath happens in a natural way. This is called Positive Pressure Ventilation system (PPVS). The first PPVS was developed in Copenhagen, Denmark, to address polio outbreak in 1952.

How is ventilator geared up to serve a patient? This is done by doing a blood test to know the patient’s metabolic rate, and the oxygen-carbon dioxide ratio required to sustain that rate. The next step is to calculate the amount of air that must be pumped in per minute into the patient’s lungs. When calibrated properly, the machine delivers the right amount of air for breathing-in. As for breathing-out, it happens passively as a natural ‘exhale’ by the patient.

As of now breathing machines are being used extensively and intensively for wide-ranging medical conditions. These include conditions triggered by damage to respiratory centres in the human brain. Damage may happen due to cancer, stroke or head injury. Injury to the spinal cord can paralyse diaphragm, and lead to difficulty in breathing. Many respirators cater specifically to critical cases of muscular atrophy and degeneration.

If a patient must remain on the ventilator for long, then breathing tube is surgically connected to the windpipe, as a passing tube through nose or mouth repeatedly for long can be agonising and injurious. Such cases may even opt for vintage non-invasive machines. The advantage of these respirators is that no tube is required to be fitted to the patient. So, even a layman can use it for a patient resting or convalescing at home. There are smaller handy variants too. These miniature breathers, with fancy name ‘turtle’, can be tied to the patient’s chest to assist breathing.

Previous Article
The Great Emu War: When Thousands of Emus Evaded Australian Armed Forces and Won the War
Next Article
Cambodia’s Magnificent Angkor Wat: One of the Largest Religious Monuments in the World