The US Department of Defense Has Released a Footage of UFOs but What Is It Actually?

UNIDENTIFIED FLYING OBJECTS OR UFOs have been a subject of human curiosity and fascination for a long time. While some may consider them to be a part of extra-terrestrial life and aliens visiting the earth, there are no substantial pieces of evidence to prove these claims. This lack of evidence, people claim, is a government ploy to keep secrets covered and thus giving a way to endless conspiracy theories.

In the first of its kind of transparency, the Pentagon officially released three videos on 28th April 2020, these videos recorded in 2004 and 2015 captured alien objects. The examination into what they are and where remains incomplete, but the speculations are varied.

A UFO spinning in the air, January 2015. (Via www.sciencealert.com / Department of Defense)

First UFO sighting can be dated back to as early as 1440 BC in ancient Egypt, which was then described as fiery disks floating in the skies. “Aerial battle” was reported in 1561 celestial phenomenon over Nuremberg in the Roman Empire, a similar celestial phenomenon was observed five years later in 1566 in Switzerland. The credibility and factuality of these instances are suspicious. While some modern UFO enthusiasts classify as the battle of extra-terrestrial origin, others debunk these stories and classify them as atmospheric optical phenomena. Whatever the facts may be, one thing is for certain, man has always been intrigued by the aforesaid aerial objects.

Coming to more recent encounters, in 1942, the US army already in a war with Japan was caught off guard with unknown aerial raids. Although it was initially thought to be Japan’s aerial attack, the Japanese denied any such activity. The Battle of Los Angeles, as it is widely known, was the battle US fought with an unknown and unseen enemy. A few years later, it was reported the aerial strikes were the result of a weather balloon crash. Besides this seemingly apocalyptic encounter, the first sound encounter was reported in 1947—a flying saucer—nine shiny flying objects were observed in the sky by the pilot, Kenneth Arnold. After this report, a few more sightings and a crash were described in the same year. The crash—Roswell UFO crash, was later discredited by the United States Air Army Forces as a weather balloon crash again. ET life supporters, for a long time, were sceptical of the Army reports and considered it to be yet another conspiracy to cover up an extra-terrestrial landing. 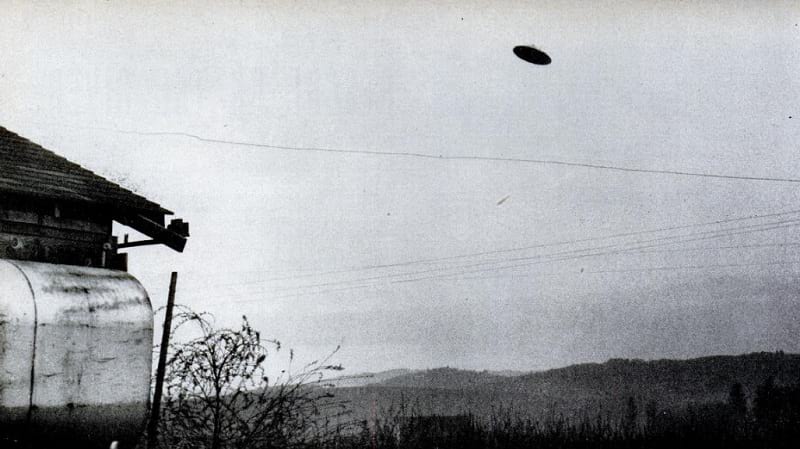 The McMinnville UFO photographs are considered to the most famous photos of UFO ever taken. It was captured by Paul Trent on a farm near McMinnville, Oregon. (Wikimedia Commons)

The mystery surrounding these aerial objects or phenomenon is yet to be cracked, giving humankind a subject to muse over. The recent videos of unidentified aerial phenomena, UFO in simpler terms, released by the Pentagon once again fanned the imagination and curiosity of the human mind. Two of these videos were leaked in 2017 by the New York Times, but Department of Defense (DOD) remained tight-lipped, although acknowledged the existence of these videos.

The recent release, DOD said, is to clear misconceptions regarding the nature of the videos and speculations if there was more to these videos.

These videos, dating back to 2004 and 2015, are available on Naval Air Systems Command Web Site. The 2004 video recorded an unknown flying object being chased in Southern California by two Navy F/A-18F Super Hornet fighter jets. Upon observing the speed and movement of this oblong object, it was popularly named Tic Tac. It instantaneously changed directions in the sky and according to the official government reports, it descended very rapidly, from 60,000 ft to 50 ft in a matter of seconds. The 2015 videos were recorded on the East Coast of USA. According to the interview given to the New York Times, the navy pilots encountered multiple flying objects in 2014 and 2015, between Virginia and Florida.

In the video, one of the pilots is heard calling them drones—drones that flew against the wind.

As with any UFO, the theories around these objects vary from person to person, those with a keen interest in sci-fi believe in alien activity, while the realists assess atmospheric illusions or secret military drills, satellites and drones. One may conclude these objects to be aircraft or drones, but their movement and speed are unlike any other aircraft. Perhaps could be AI-driven drones, one can never tell, as these objects upon detection scurried away. Their structures and origin are hard to discern from the videos—leaving a lot for human imagination and scientific and conspiracy theories. The truth and purpose of these Unidentified Aerial Phenomena or Unidentified Flying Objects will only be revealed with time.

Click: There is a UFO religion where people believe in extra-terrestrial beings called elohim