USNS Comfort: A Ship of Hope Amidst Corona Crisis 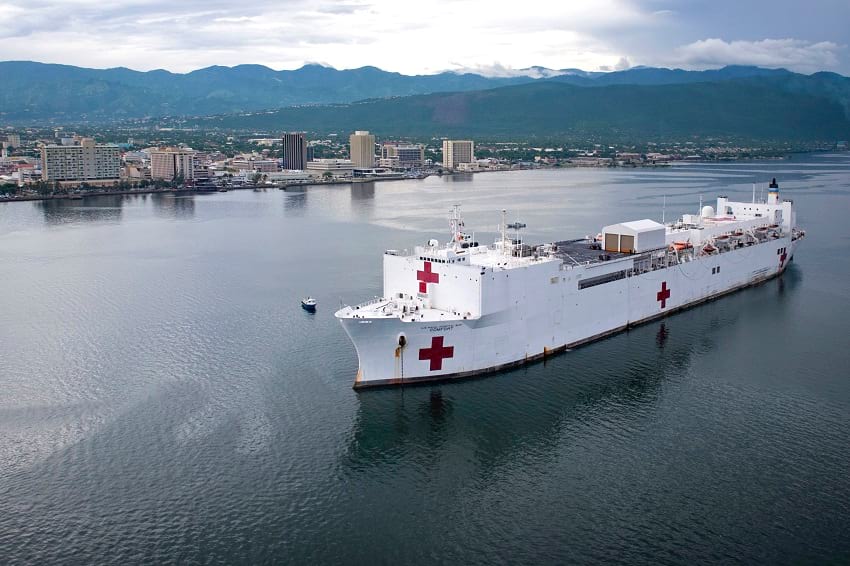 The United States Navy boasts of some of the best and largest ships in the world. One such ship is the USNS Comfort (T-AH-20) which functions as a gigantic floating hospital and is currently stationed in New York City. The USNS Comfort is currently aiding New York City to combat the overcrowding in light of the global pandemic caused by the mutant coronavirus strain, COVID-19. The ship is nearly four decades old but can still house up to 2000 people, including crew and patients.

Interestingly, when the ship was initially constructed, it was to be used as an oil supertanker and was named the SS Rose City. The US Navy had given out a contract to the National Steel and Shipbuilding Company for this ship, along with its sister ship- the USNS Mercy. In 1987, the US Navy purchased both the ships from them to have them deployed.

Structure of the ship

Standing at 100 feet tall, the ship’s height is comparable to that of a ten-storeyed building. It has a deep draft and has the capacity to displace 70,743 tons of water. Over 894 feet long (272 meters), the USNS Comfort areas across a length of approximately 3 football fields. It is so large that, it must often be moored a mile away from the shore at the docking stations in ports.

A large day-and-night helipad has been provided within to accommodate large military-grade helicopters deployed to pick-up and drop patients during a crisis. The ship’s look, a stark white surface with a number of red crosses, helps to illustrate its purpose and protect the crew and cargo against violent naval attacks or piracy. Patients from the ships docked alongside the USNS Comfort are also allowed in.

Medical facilities within the ship

The USNS Comfort can be completely prepared and crewed in just about five days. The life force of the ship are the 12 operating rooms and 1,000 beds that support the different required levels of care. It houses 500 beds that are allotted for minimal case needs, 400 beds for intermediate cases, 20 designated for surgical recovery, and a further 80 for intensive care patients. The USNS Comfort has the capacity to receive and care for 200 patients every day.

The ship has a stellar full-scale medical facility that even includes a dental clinic, four x-ray machines, and a CT scanner. A pair of oxygen-producing plants, an optometry lab, and coolers to hold 5,000 units of blood, are integral assets of the ship. The various other onboard services include a satellite lab and a central area for sterile causality receiving. A medical supply department, along with a well-stocked pharmacy, is all included within the hull of this singular vessel. To support the smooth functioning of the medical facility, the ship has a huge laundry operation and its own morgue. 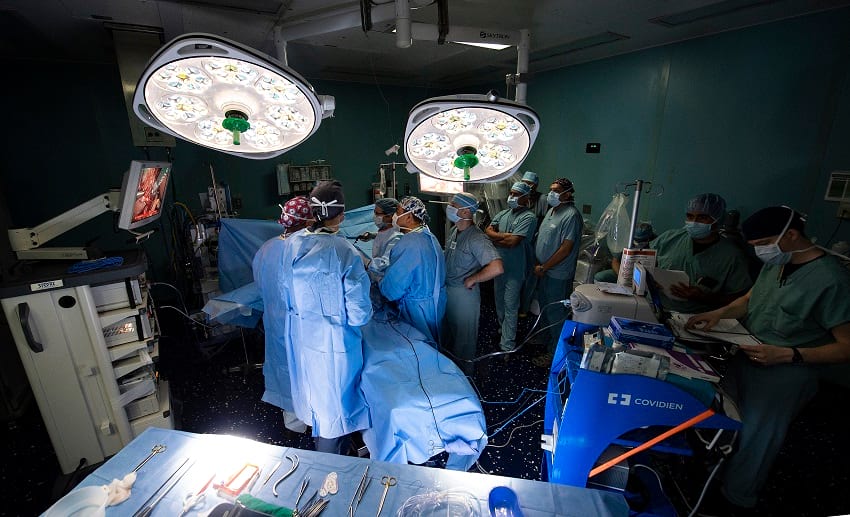 Despite its humongous size, the USNS Comfort faced major logistical disadvantages since it was not built to be a hospital. This made the process of moving around patients extremely tedious and a lot of additional safety measures had to be put in place to avoid any critical damage to the patients.

A major issue within the ship pertains to patient movement through the ship’s rooms and hallways. Since it was originally built as an oil tanker, the bulkheads used to remove the oil were left in place and the refits did not have hatches between them. The majority of the movement of patients from one part of the ship to another had to be made by moving the patients up to the main deck. They were then moved down again into other parts of the ship. This round-about route owing to the hallways not being effective for patient movement made the process rather cumbersome.

The many relief voyages of USNS Comfort

The USNS Comfort has been deployed for support at disasters and warzones alike, including ‘Operation Desert Storm’, ‘Operation Iraqi Freedom’ and the 2010 Haitian Earthquake. The ship has played an integral role in providing medical aids during all these operations.

1994: An exception to this would include the ship’s role during ‘Operation Uphold Democracy’ in 1994. In this case, when an internal unrest arose in Haiti, the USNS Comfort was sent in not as a hospital, but as a processing centre for the migrants. Civilian personnel were boarded instead of doctors to ID and process the Haitian migrants. Out of the 1,100 people who were processed, 400 were transported to Guantanamo Bay, Cuba, where the ship arrived in the month of June. Later that year, however, the USNS Comfort returned to Haiti as a hospital to receive casualties from the continued unrest and provide medical supplies. The ship finally went back to the homeport in October 1994.

2001: ‘Operation Noble Eagle’ was one of the most important deployments for the USNS Comfort. On September 12, 2001, the ship left for New York owing to the historic terrorist attack on 9/11. At pier 92 in Manhattan, the ship docked itself on September 14. During the stopover, 541 relief workers were treated for their many injuries, including near-fatal respiratory ailments. Navy personnel also provided mental counselling, and the workers were provided services by the local massage therapists. For this outstanding performance, the USNS Comfort received the Navy Unit Commendation medal.

2005: During ‘Joint Task Force Katrina’, the USNS Comfort had to leave Baltimore for the Gulf Coast with a mere two days of preparation to provide aid to those affected by Hurricane Katrina. Across the target sites in Mississippi and New Orleans, the ship treated 2,000 patients and remained in the area for medical aid for seven weeks thereafter. The ship was awarded the National Defence Medal for her impressive and tireless duty.

2007: The ship also ran an American humanitarian mission which commenced in June 2007 and provided access to healthcare for roughly 12 Central American, South American and Caribbean nations. Consequently, the USNS Comfort helped further the President’s agenda to increase Social Justice in the Western Hemisphere. This promoted the goodwill of the US and served the purpose of training their military in medical aid.

A beacon of hope amidst COVID-19 crisis

The USNS Comfort has been deployed on the East Coast with Navy Capt. Patrick Amersbach at the helm to provide hospital relief from the impact of COVID-19. USNS Mercy (T-AH-19), its sister ship, is the headship of this class of hospital ships in non-commissioned service with the United States Navy. Under the command of Navy Capt. John R. Rotruck, Mercy has been deployed to the West Coast of the US. March 27, 2020, marked the arrival of Mercy at Los Angeles Port while Comfort docked at New York City soon after on March 30. The aim of the two ships is to treat patients other than those with COVID-19 through medical and surgical care, freeing up land-based hospitals to deal with the deadly virus.

The two ships, though occupied scantily at the moment, is working to provide support during the pandemic. The staff on board is diligently helping move patients as fast as they can during this global crisis in order to provide medical assistance to those who are in need. In the weeks to come as the number of COVID-19 cases boom exponentially, the USNS Comfort and USNS Mercy could be vital assets that help turn the tide.

Enjoyed this article? Also, check out “MS The World: Life on Board the World’s Largest Residential Cruise Ship“.

Previous Article
Infections Caused by COVID-19 Causing Virus Family—Coronaviridae
Next Article
Someone Put Up The Statue of Unity for Sale on OLX for ₹30,000 cr to Meet Govt’s Covid-19 Expenses