Someone Put Up The Statue of Unity for Sale on OLX for ₹30,000 cr to Meet Govt’s Covid-19 Expenses The Statue of Unity as seen from the bank of Narmada. (Pradeep717 / Wikimedia Commons)

Statue of Unity, built as a tribute to Sardar Vallabhai Patel—the first Deputy Prime Minister and Home Minister of India—was put up for sale by an unidentified user on OLX.

The statue is located in Gujarat along the banks of river Narmada and is the tallest statue in the world. The cost of construction is approximately 3000 crore rupees. A lot of controversies and protests surrounded the project since it’s initiation in 2013. Funds were raised by the state government, tax money was allocated for building the statue. After years of collecting money and designing, the construction was completed in 2018 and is open to the public since then. 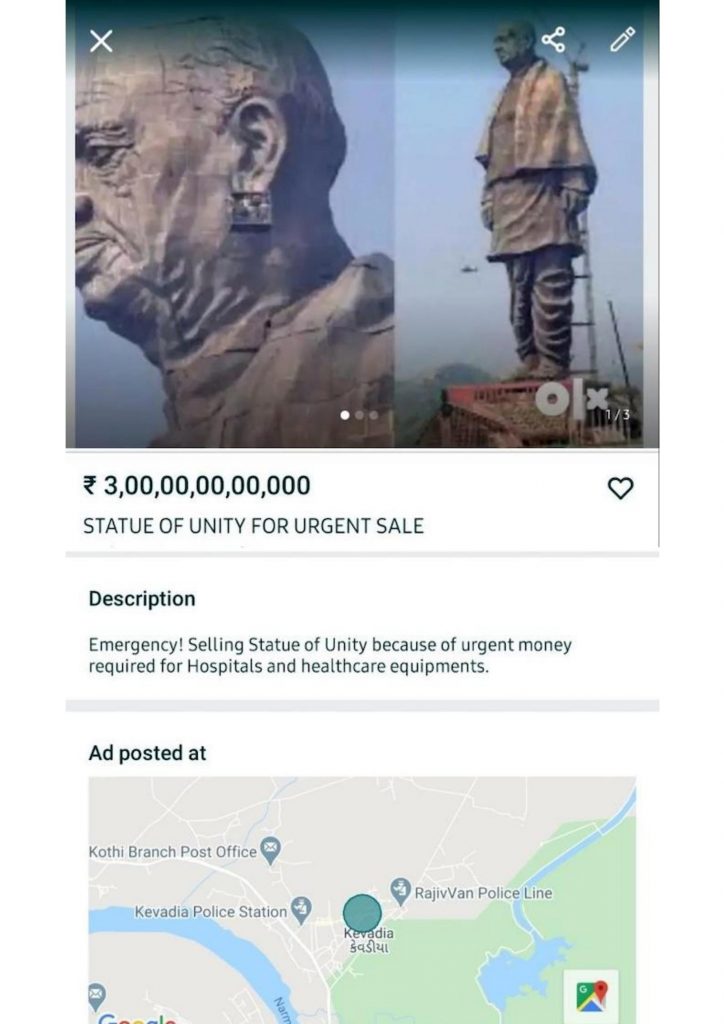 The ad on Olx which since then has been removed.

Amidst, the distressing news of COVID-19, the Statue of Unity gave a reason to be amused. An unidentified person from Gujarat made an advertisement on OLX, an online platform to buy and sell services and goods, to sell the statue. The reason stated for selling was to meet the demands of PPE kits and other equipment by healthcare workers to support them fighting the pandemic. The statue was declared for sale at a whopping cost of 30,000 crores.

Despite being unauthorised to sell government property, the unknown man made the advertisement to mislead people and defame the government, said the chief administrator of the Statue of Unity.

Although the advertisement was removed immediately by the e-portal, a cheating and forgery case has been registered under IPC, Epidemic Diseases Act and Information Technology Act, by the memorial’s authorities.

Previous Article
USNS Comfort: A Ship of Hope Amidst Corona Crisis
Next Article
A Peek Into The Dark Times That Befell Assam and Its Effect on the Modern-Day State