Sea Shadow (IX-529): The Story of Surreal Stealth Ships Which Defy the Enemy’s Stranglehold and Strike The element of surprise is crucial to victory in warfare. This can be achieved by escaping the enemy’s vigil. Then only, it is easy to hit the enemy at a chosen time and place. This happened at Pearl Harbour, the U.S Naval base near Hawaii. Japan took America by surprise, destroying 20 ships, 300 planes, killing 2400 and wounding 1000 people. In vengeance, America nuked Japan, and the world changed forever. Warfare too changed radically. Stealth vehicles became the lifeline of the war game. These vehicles could escape the enemy’s IFF (Identification of friend or foe) screening and slip into the enemy’s territory unnoticed. The trend began with radar-defying aircraft. Subsequently, the technology was applied to naval ship- Sea Shadow (IX-529).

The challenge is to neutralize waves which locate movement

The three keynotes of IFF (identification of Friend or Foe) exercise are the sonar (sound navigation and ranging), the radar (radio signals) and the infrared (heat sensors) waves. The stealth ships must escape these three to survive and succeed. Stealth technology is all about facilitating such ‘escape’ and is in great demand worldwide. Reflecting surface of the ship is called the Radar Cross Section (RCS). An effort is made to reduce RCS through shape, design and the painting of Radar Absorbing Materials (RAMs) on the ship body. The first stealth carrier was an aircraft

The American Aerospace company- the Lockheed, made radar defying fighter plane, F-117 Nighthawk which saw action in the Gulf War of 1991. The outside of the plane was dotted with angular surfaces. Any radiations which fell on these surfaces got scattered in multiple directions. At the same time, radiations also got absorbed into a coat of radar absorbing material (RAM) applied on the plane’s outer surface.

The little amount of radiations or radio waves which got reflected into the enemy radar, don’t suffice for proper identification of the aircraft. So, the aircraft escapes the enemy’s preventive assault on it. If an aircraft could `escape’ thus, why not a naval ship? On this premise was built the Sea Shadow (IX-529) an experimental stealth ship. Though it remained experimental only and wasn’t put into action, it opened the way for an improved version of its class.

From aircraft, the idea was planted on naval ships 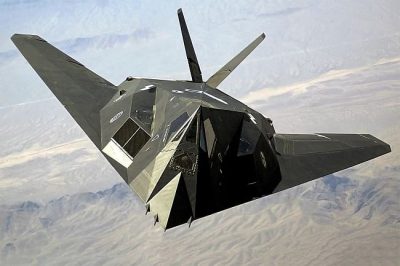 Sea Shadow (IX-529) was built and tested on a submersible ship called Hughes Mining Barge (HMB-1). It was a joint venture of DARPA (Defence Advanced Research Projects Agency), the US Navy and Lockheed. Technically, Sea Shadow was a SWATH ship, i.e. ‘Small Water Plane Area Twin Hull’ ship. Two hulls, instead of a conventional one, were provided for balance and buoyancy. The twin-hull stayed below the water surface. SWATH ships travel at a faster speed, has a higher carrying capacity, but consumes 80% more energy than the single hull types.

Each of the two hulls of IX-529 had a propeller, a stabilizer and hydrofoils (an arrangement that lifts the hull up to reduce friction when a boat moves at a fast speed). The ship was thus designed to ensure that it remained stable even when the sea was rough with waves reaching up to 18 feet high. Ship’s first trial in 1981 was a failure as it couldn’t dodge the surveillance systems. A course correction was made by repositioning motor propellers and further trials were held in 1985 and 1986. The exercise proved useful for the future endeavours, but Sea Shadow itself could barely reach a functional status. In 1993 it was put up for public viewing. Finally, in 2012, it was sold and dismantled. In the meanwhile, the first ship of Arleigh Burke-class destroyer was commissioned in America on 4th July 1991. It was another genre of stealth ship equipped with the computer-radar-and-weapon system. It was named after Admiral Arleigh Burke, the Hero of World War II, who later became chief of Naval Operation. The ship was designed for anti-aircraft, as well as anti-submarine action. The hull and the mast of the ship were designed to dodge the enemy radar. It had an all steel construction, an improvement over aluminium-admixture used in earlier versions, as aluminium was vulnerable to fire. Double spaced steel was put in ship’s vital spaces for protection from rocket attacks. Multiple-angle surfaces in place of the vertical surface, and tripod mast in place of the traditional lattice mast; these were the unique features of Arleigh Burke design which made the ship undetectable by anti-ship missiles.

Modernization and updating of Arleigh Burke led to a new series of stealth ship, USS Zumwalt (DDG-1000). A game-changer in warfare, Zumwalt had a smooth outer surface with sharp angles. It was so designed that it could easily tear through massive water waves. The hull was wider below the waterline than above it. This effectively diminished the ship’s 190-meter Radar Cross Section (RCS) to that of a small boat. Motors were electrically driven and the exhaust pipe was kept cool. This reduced the chances of infrared and sound waves locating the ship’s position with accuracy. However, by 2008, there were issues related to manufacturing cost and technological integration demanded by the American navy. Hence Zumwalt was laid down, to be taken over by improved editions. And the story goes on, and on

First developed by the German Navy, the stealth ships have come a long way and are being used by all countries of the world. ‘Visby-Class’ of stealth ships of the Swedish Navy are best of the lot internationally. Other famous names of the genre are British Type 45, India’s Shivalik range, Braunschweig Corvettes of Germany, and Houbei Missile boat of China. Doubtless, best in warfare is a transitory phase, and technological upgradation must go on ceaselessly all the time.

Enjoyed this article? You would also love “Lockheed Blackbird SR-71: The Fastest, High-Altitude Reconnaissance Aircraft in the World“.

Previous Article
Understanding Day Length Fluctuations – What They Are and What Causes Them
Next Article
ʻOumuamua: A Mysterious Interstellar Rock Discovered in Our Solar System