RP FLIP: Ship Turned Research Platform which Sinks for a Cause The RP FLIP (FLoating Instrument Platform) is an oceanographic Research Platform (RP) conceived and built by the Marine Physical Laboratory, it is actually a customized float, not a ship. It is owned by the U.S. Office of Naval Research (ONR) and operated by Scripps Institution of Oceanography, La Jolla, California.

RP FLIP is a 355-foot-long drift, having a functional laboratory in front and a hollow metallic extension at the back. When the hollow contains air, FLIP floats on water. When air is replaced with water, then it sinks in water, elevating the front part, the laboratory, by a sharp 90 degrees. The research work goes on uninterrupted in this vertical position. Work over, the float returns to the horizontal position, to be towed to a new location for oceanographic study or surveillance. 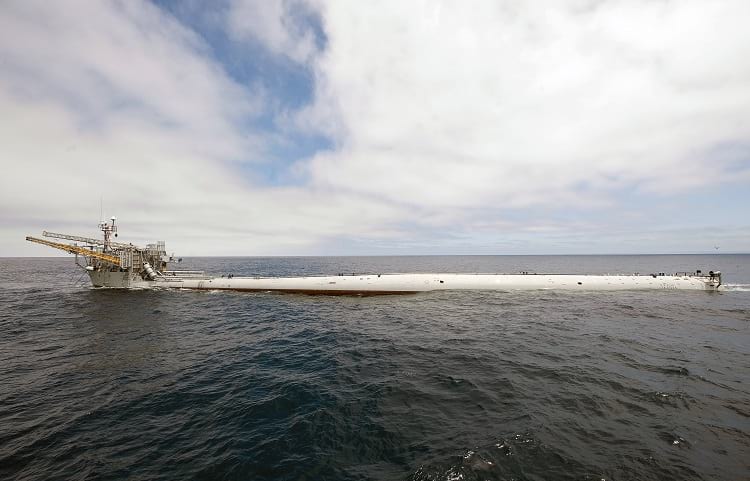 Interior and exterior is designed for a radical shift in position

Most of the lab’s compartments have two doors, one for the horizontal, and another for the vertical position. Accessories and equipment are so designed to remain functional in changed orientations. Some fixtures are provided in duplicate so that one remains usable, irrespective of the float position. Others are swivel supported for easy manoeuvrability. Of the 2 bathrooms available on the lab, one functions in vertical, and another in horizontal alignment of the Research Platform.

How was the idea of a floating lab conceived?

Two scientists, Dr Fred Fisher and Dr Fred Spiess wanted to study the nature of sound waves in the depths of sea water. Normal ships move up and down, and sideways, on the restless sea surface. Hence, were unfit for such studies. Search for a serene lab on water surface led to the invention of FLIP in 1962. This lab collects weather-related data, studies sound signals, measures temperature, calibrates wave size and density of seawater on a particular location on the sea surface. In order to keep the RP isolated from interfering sounds, no engine or propulsion mechanism has been installed on RP. It is moved to the water surface with the help of outside force. The RP is so designed that it is steadiest and quietest when in the vertical position. 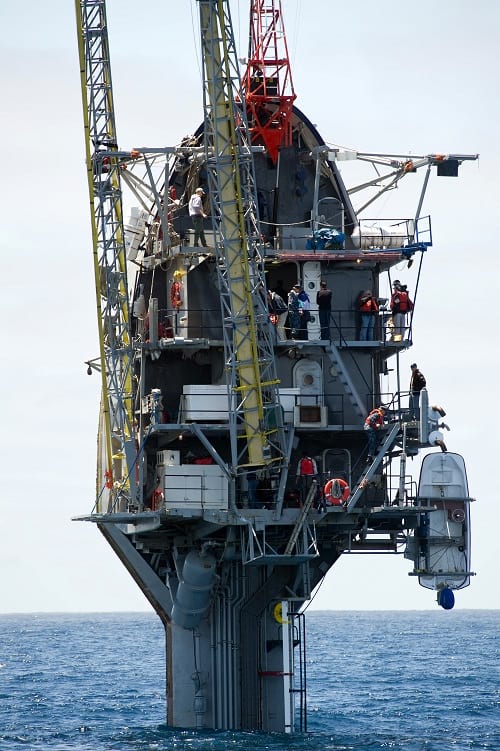 The ship in a vertical position. (Office of Naval Research / Flickr)

A total of 5 crew members and 11 researchers can remain interned on FLIP for a month. When the float switched from the horizontal to the vertical position, a partition in the horizontal position becomes the deck in the vertical position. On this deck, the lab staff huddles up in the switch-over period. When the change is complete, a five storey laboratory, the 55 feet of RP, is seen standing over the sea surface. The 300 feet of RP remains submerged in the water below. Switch in position is a visual delight, and takes about 28 minutes. As seawater fills into the shaft, it dips into the sea at 90-degree angle, jacking up the laboratory by the same degree over the water surface. In the vertical position, all measuring devices work to their optimum capacity. Therefore, the data picked up is reliable.

The subject matters studied by FLIP include sounds of marine life, heat flow between sea and atmosphere, the formation of storms, the impact of earthquakes, and circulation of water in the ocean bed. RP works in deep (more than 2000 fathoms) as well as shallow waters and isn’t ruffled even by an 80-foot wave. A 30- foot wave causes a meagre 3 feet up-down in the vertical lab. Notably, RP FLIP is one and the only research station of its kind. It was renovated in 1995 and has conducted quality research in the marine milieu. It was rested (dry dockings) 4 times since its launch and completed 50 glorious years in 2012.

Flip to vertical and horizontal positions is easy and smooth

From a functional vertical position to the resting horizontal stance, the switch for RP is the converse of the stand-up operation. To begin with, water in the shaft is removed with the help of compressed air. That makes the shaft light, and moves towards the surface of water till it becomes perfectly horizontal, and emerges out of the water. The research lab at the other end automatically slides down to horizontal position. And once again, we have the float, spoon-shaped, bobbling in seawater. 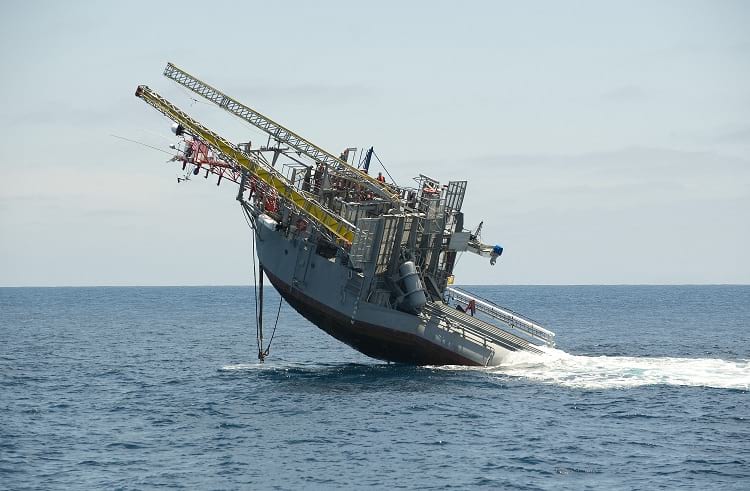 RP FLIP amid transitioning from horizontal to a vertical position. (Office of Naval Research / Flickr)

Previous Article
China’s ‘One Belt, One Road’ – The Economic Project That Might Reshape the World
Next Article
The Expansion of US Military Bases Overseas and How India Finally Surrenders its Neutrality