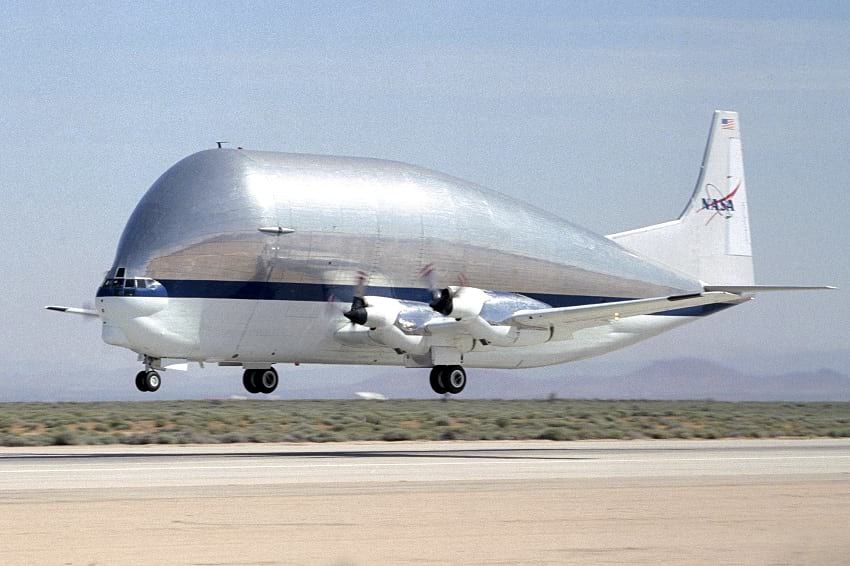 The Aero Spacelines Super Guppy is a mammoth and commodious cargo transport aircraft that is used to haul oversized cargo components. Super Guppy is the ideal successor to its erstwhile avatar called Pregnant Guppy.

Aero Spacelines manufactured their first flight Pregnant Guppy in August 1965. The aircraft was named for its striking resemblance to a pregnant guppy fish. The company later released five such flights in two versions. Both the variants were colloquially called the “Super Guppy”.

The original Super Guppy, aka “SG”, was built straight out of the fuselage of a Boeing C-97 named Turbo Stratocruiser. It was the military edition of the “Stratocruiser” Boeing 377 passenger plane that operated in the 1950s. 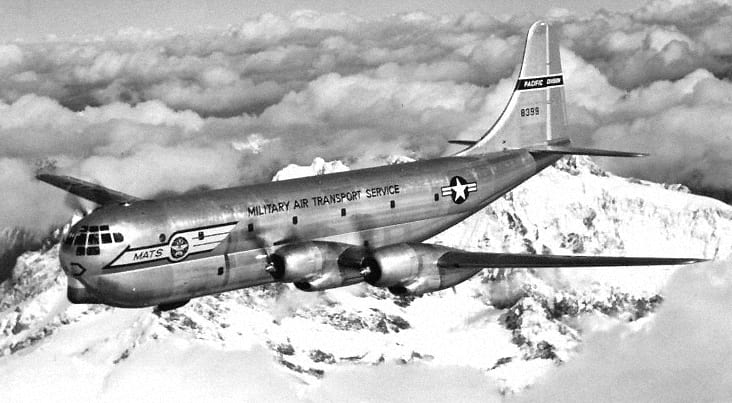 The main body of the original aircraft was extended to 141 feet in length. It was inflated to a diameter as big as 25 feet. The inner cargo compartment had a length of 94 feet 6 inches. The fuselage was tapered down to a width that measured 8 feet 9 inches. The nose could open sideways to provide entry to bulky cargos. Apart from the modifications carried out in the fuselage, the aircraft was borne with Pratt & Whitney T-34-P-7 turboprop engines for more power efficiency and a longer travel range. It also had remodelled surfaces for its wings and tail. Super Guppy has a maximum payload capacity of 24,494 kilograms and can cruise at a maximum velocity of 300 miles per hour (480 kilometres/hour).

The key differentiator that sets Guppy apart, from other gigantic aircraft is its enormous and extra-wide cargo bay that allows transportation of military jet aircrafts having wingspans up to 7.6-meters. Therefore, although the Super Guppy is now obsolete, its unprecedented and perfect track record has proven its veritable merit. Super Guppy Turbine (SGT) was the official second variant of the original. It made use of Allison 501-D22C turboprop engines, unlike the first one that was powered with Pratt & Whitney T-34-P-7 turboprop engines. However, in contrast to the original, the 2nd version had the prime segment of its fuselage developed from scratch.

Only the cockpit, main landing gear, wings and tail of the original were retained. The swinged-out nose part, now rotated by 180 degrees, was dispossessed from a Boeing 707.

This slightly lowered the front portion of the aircraft, making the cargo-bay floor more levelled for an easier and streamlined loading mechanism.

It was possible to increase the width of the cargo bay floor to 13 feet. The aircraft was further lengthened to 111 feet 6 inches.

Because of these amendments in design, coupled with a uniquely created atmospheric-pressure-tolerant crew cabin, SGT facilitated a smooth non-interfering higher-altitude cruising. Also, the newly built aircraft could carry more freight up to 24700 kilograms, marginally more than what its predecessors did.

During the initial years of the 1970s, Airbus was using the twin Super Guppy Turbines to move aeroplane parts from local production depots to the central assembly plant in Toulouse.

From 1982 to 1983, two more Super Guppy Turbines were manufactured in France by UTA Industries after Airbus purchased the rights to build the aircraft.

Why was Guppy aircraft so indispensable to NASA?

The Super Guppy had a pivotal role to play in the transportation of crucial components for a lot of NASA’s important missions. President Kennedy was the one, who had announced NASA’s pioneering project to conquer the moon before 1970.

But during the initial phase, the only way, the Apollo rocket stages could be transferred from California to Florida was by shipping the constituent parts with the help of frustratingly slow boats. These used to ply across the Panama Channel. These harrowing journeys used up a lot of travel time which consequently delayed NASA’s plans.

It was NASA who then approached Aero Spacelines to help find them an aircraft solution capable of transporting a huge bulk weighing more than a few thousand kilograms in a single trip. The perfect response came in the year 1962 with the planning and the eventual deployment of Pregnant Guppy that once endured and carried some of the biggest payloads. Since the first version Super Guppy has traversed more than three million kilometres for NASA. It efficiently and safely carried tremendously enormous yet incredibly fragile components and concentrated hardware for NASA’s prominent programs like Apollo, Gemini and Skylab. If not for Guppy, NASA’s endeavour towards sending astronauts to the moon by 1969 would not have fructified.

Still NASA’s favourite even after 53 years

Right up to the present time, NASA has consistently relied on Guppy to deliver gargantuan components meant for use by the International Space Station or other recent extra-terrestrial projects.

Though the original aircraft have now retired, NASA’s superbly improved and modernized Super Guppy (377SGT-F) still conducts flights all across the world. The grand flying machine is even used by different industries to convey massive consignments when not in use by NASA.

Currently, Super Guppy has been utilized for NASA’s ambitious Exploration Mission-1 (EM-1) to transfer the Orion crew module pressure vessel. The module is expected to be launched on board the Space Launch System which till date is the world’s biggest rocket ever built.

The pilot test flight is scheduled to be conducted sometime in 2018. In the course of the actual mission, Orion is believed to be travelling thousands of kilometres, far off the moon.

Current whereabouts of the five Guppies

Since Guppy’s debut in 1965, various other planes have been in the reckoning that could carry unbelievably huge loads. Amusingly, there has been a fierce battle amongst rival aircraft builders since the genesis of Guppy to construct an aircraft with the heaviest cargo payloads. Some of the other prominent planes of Guppy’s ilk are

Previous Article
Australian Bushfires: Deadly Yet an Inextricable Part of the Australian Ecosystem
Next Article
Margaret Howe Lovatt: Strange Case of a Male Dolphin Falling in Love with a Young Lady