Convair NB-36H: The only American Aircraft to Carry an Operational Nuclear Reactor 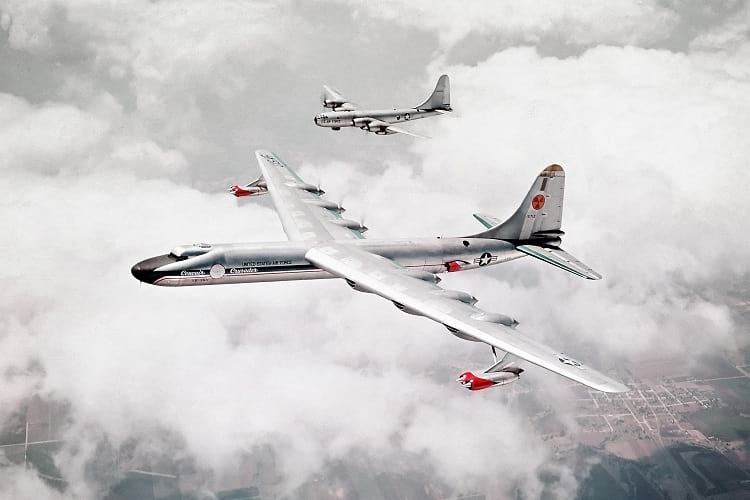 Nicknamed the ‘Crusader’, the Convair NB-36H was created to prove the efficacy of carrying a nuclear reactor by air. The ultimate goal of the program was to create nuclear-powered aircraft with limitless power, dubbed Convair X-6. The Convair NB-36H was initiated into the US Army Air Force under the Aircraft Nuclear Propulsion (ANP) Program.

The NB-36H under the hood

The NB-36H was built using elements from a fleet of the Convair B-36 bomber, which had been destroyed in a tornado, in 1952, in Texas at the Carswell Air Force Base. Interestingly, the NB-36H is an earlier prototype compared to the B-36. However, it was much more cost-effective to use the salvageable parts to overhaul an early prototype as opposed to repairing the damaged fleet. 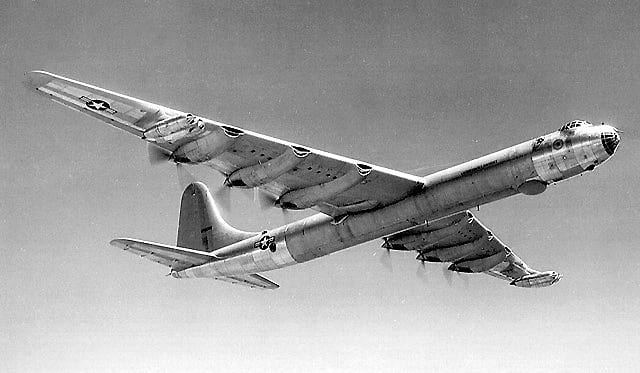 The NB-36H had a newly designed front compartment. This compartment was heavily coated with lead, and integrated yellow-tinted lead glass on the windows to shield the members of the crew from radiation. Though it was the ultimate goal of the program, the Convair NB-36H was not powered by a nuclear reactor. The reactor could, in fact, be extricated from within the aircraft using a crane, when on the ground. Weighing 35,000 pounds, the air-cooled atomic reactor was of a 1000-kW (or 1 megawatt) design. The bomb bay in the middle of the flight housed the reactor, hung on a hook, for quick loading and unloading. Time is of the essence for nuclear reactors, as they must be stored underground, to prevent accidents, as much as possible. ‘Project Halitosis’, a system for monitoring radioactive gases from nuclear reactors, was in use to ensure safety.

The first flight of NB-36H and safety protocols

On 17th September 1955, the Convair NB-36H took off for the first time. The test pilot flying the NB-36H was A. S. Witchell, Jr. The test flights took place in sparsely populated areas and the reactor was only switched on when they were at a very high altitude. On every test flight, a platoon of marines flew in C-97 next to the NB-36. In case of a crash, the platoon of armed marines would parachute down and cover the test aircraft. The Convair NB-36H was a classified project up until late 1955. There was a risk of radioactive contamination in case of a disaster or an accident. A hotline directly to the President’s office was set up in case of an ill-fated crash.

Why was the Convair NB-36H shelved?

Between September 17, 1955, and March 1957, the Convair NB-36H performed 47 test flights. The project covered a whopping total of 215 hours of flight time over Texas and New Mexico. Focus on the development of the NB-36H, however, soon started reducing. The tinted glasses and shielded compartments did protect the crew from dangerous radiations from the nuclear reactor. However, nothing could eliminate the dangers of contamination in case an accident was to occur. This was a major drawback of the project that was brought to light during the test flights. The functional nuclear reactor was removed from within the aircraft, to prevent disaster. The Aircraft Nuclear Propulsion (ANP) program was completely scrapped out in 1961, thus sealing the fate of the Convair NB-36H. The Convair NB-36H had radiation warning symbol on the tail. (Robert Sullivan / Flickr)

With tensions of the Cold War brewing, the US government wanted to switch gears and fund the development of heavy bomber aircraft with jet engines. The progress of the ANP program was exceedingly slow. Even so, President Dwight Eisenhower continued to fund the project despite not being convinced of the need for this program. By the end of the 1950s, most people saw nuclear-powered planes as a redundant concept owing to the seminal advancements in ballistic missile and supersonic aviation development. The Aircraft Nuclear Propulsion program was finally cancelled by John F. Kennedy in 1961, owing to the ‘remote and dangerous’ nature of the project.

Was the project relevant at all?

Despite the project being shelved quite early on, the Convair NB-36H remains a hallmark project due to the scientific work that had gone on to sustain the project. Procedures of handling liquid metals or fused salts involved in the project were indispensable for NASA when they developed their nuclear reactors and generators. Till date, the Convair NB-36H is the only American aircraft to have carried an operational nuclear reactor.

Enjoyed this article? Also, check out “Lockheed Martin F-22 Raptor: A Fifth-Generation Monster in the Sky“.

Previous Article
Amelia Dyer: The Nurse Who Killed Babies for Business
Next Article
The Tjentiste War Memorial: A Commemoration of Those That Died in the Battle of Sutjeska