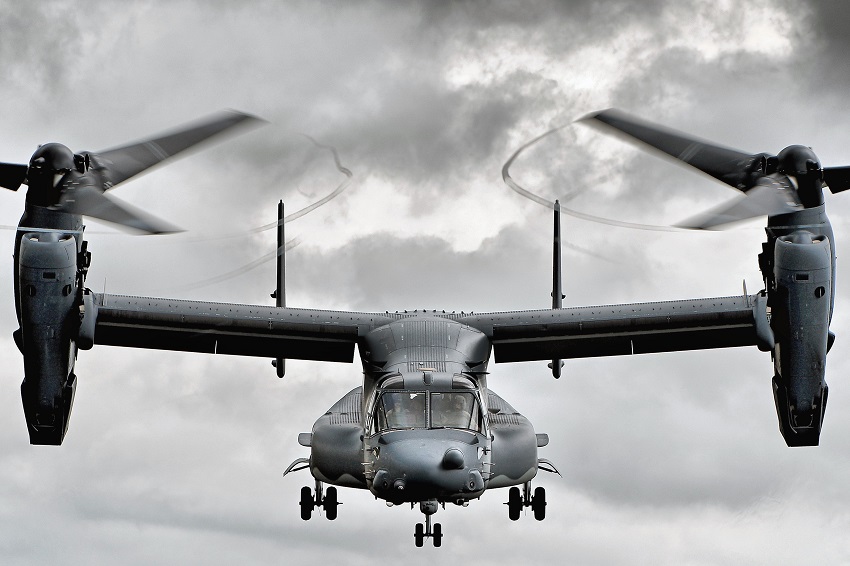 Circa 1980. The American military was in for a serious setback. Operation Eagle claw, launched for release of American hostages in Iran, had to be called off. The inability of helicopters to reach the target in one go, and needing assistance on way, ruined the mission. A freak accident on a stopover killed 8 commandos. The failure raised some serious questions. And the answer was found in Bell Boeing V-22 Osprey, the aircraft which could land and take off like a helicopter, and travel long distances at high speed like an aeroplane.

Tiltrotor is the switch between 2 modes

Quick and precise hit over a long-range is key to the success of military operations. Hence, right since the Second World War, a need was felt for a fusion of helicopter’s vertical lift, and aeroplanes’ horizontal speed. The combo was finally developed by Bell Helicopter, Textron, in the 1950s. Named Bell XV-3, it was an aeroplane with wings having rotating fans/ propellers at the tips. The propellers could tilt 90 digress (tilt-rotor concept) for 2 functional positions. One, vertically upright, like propellers in a helicopter. Two, horizontally, towards the nose of aircraft, like in aeroplanes. Fans were rotated by turboshaft engines located in the belly of aircraft.

In helicopter mode, propellers rotate in the opposite way

In position one, aircraft could lift vertically from the ground to become airborne and land on ground similarly, like a helicopter. In two, the aircraft could moves linearly like an aeroplane. The linear speed in the air was 185 miles an hour, much faster than helicopters of that era. The fans located on wingtips rotated in different directions. That provided stability without the need of a tail fan used in conventional helicopters. Successful in more than 110 transitions from a helicopter to airplane mode, Bell XV-3 was discontinued following one accident. Nevertheless, the success of tilt-rotor for 2-in-1 aircraft was established beyond doubt.

Bell XV-15: Engine and propellers were conjoined in 1977

Bell XV-15 program was picked up in 1977. This time the turboshaft engine and the propeller fan, instead of being located at different places, were merged into one functional unit. The unit was installed on the tip of the fan, and the unit as a whole acted as tilt-rotor. The rotating blades could face forward (like an airplane) or upwards (like a helicopter). It was an improvement over the earlier version in 2 ways. One, tilt-rotating was simplified. Two, more space could be made available for passengers and equipment 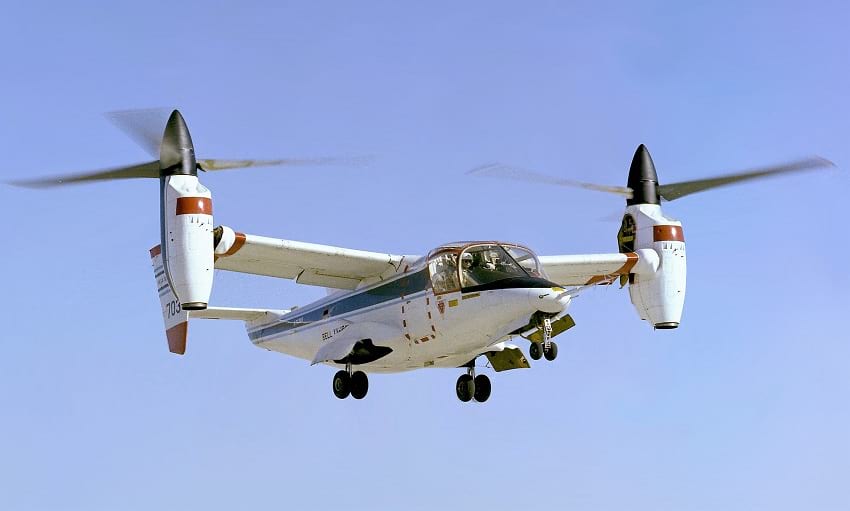 The debacle of Iran Hostage crisis force pentagon to go for long-range transport aircraft which could have taken their commandos up to Tehran in one sortie, without midway halts and refuelling. So, in 1981, Bell Helicopter, Textron, was commissioned to develop Joint Services Advanced Vertical Lift Aircraft (JVX).

In spite of hiccups, programme V-22 remained in force

The contract for JVX was won by Bell-Boeing in 1983 and several varieties of aircraft were produced. These included variants for Marine Corps, Air Force, Navy and Army. On May 23rd, 1988, Bell’s Flight Research Centre produced the first Osprey under the V-22 program. The program though ran into rough weather. The cold war between America and Russia was heading to an end. Consequently, there was a drastic reduction in the defence budget and V-22 faced the brunt of cost-cutting. There were attempts even to close down the programme. But the program survived, in spite of accidents which caused a great loss of men and material. 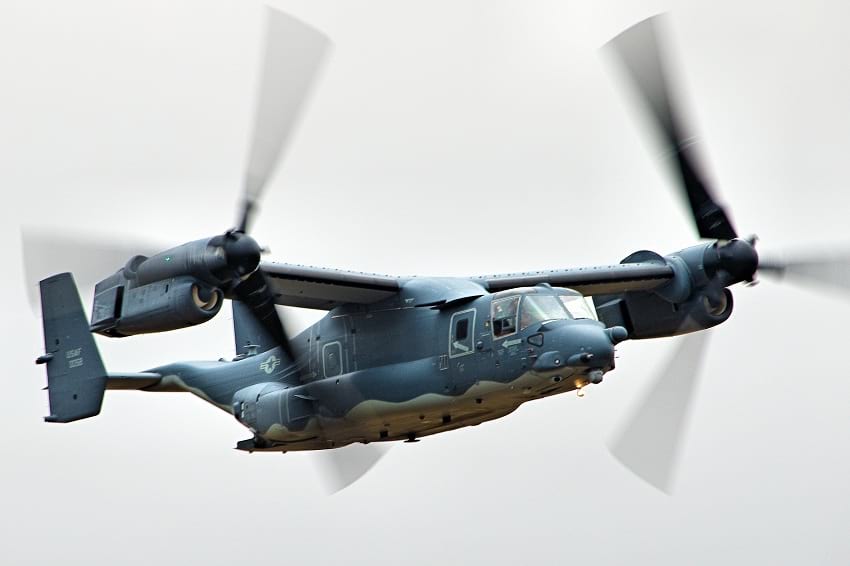 The present-day Osprey is the perfect answer to the failure of Operation Eagle Claw in 1980. Equipped with 2 Rolls Royce Engines, it can carry 24 passengers in addition to 4 crew members internally, and ferry 12,500 pounds in an external slung load (artillery, land vehicles, and supplies) externally. MV-22 variant of it can fly at a speed of 276 miles an hour and cover a range of 230 miles. It can also be refuelled in the air to increase the range. In May 2015, it covered a distance of 2,500 miles, from a Pacific island to Nepal. More variants are being manufactured

Presently, the number of Ospreys with the US Marine Corps is 360. Air force has 50 and Navy 48. The difference between MV-22 and CV-22 is that the latter’s fuel carrying capacity is 304 gallons more as compared to former. Hence CV-22 can cover a greater distance, albeit at a slower speed. For cargo shipment, the US Navy has ordered for 38 CMV-22Bs, which can travel a greater distance than other variants.

MV-22 and CV-22 have seen action in Iraq, Syria, Africa and Afghanistan. Ospreys, because of tilt-rotor, can’t carry side-mounted weapons like traditional helicopters. Only light machine guns are carried, at the back. Efforts are underway to develop a belly-mounted gun compatible with JVX.

Notwithstanding trials and tribulations, the idea of tilt-rotor, and its manifestation as V-22 Osprey is here to stay. Bell V-280 Valor, another variant of the genre, is slated to replace UH-60 Blackhawk in Army. 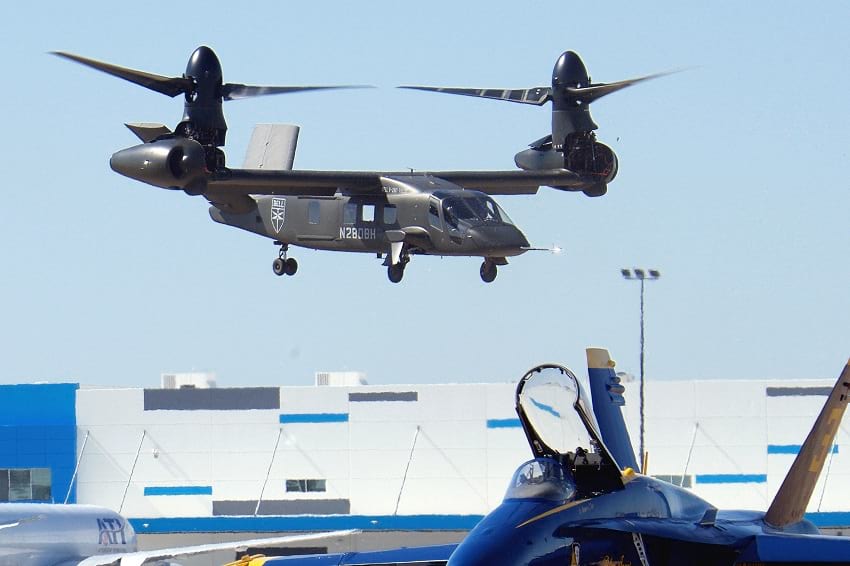 A commercial tilt-rotor, AgustaWestland AW60, is being developed by Leonardo – the aviation giant of Europe.

American Navy shall have an upgraded version, CMV-22Bs very soon, in 2020. Marines and Air force shall work with their present stock for long.

V-22 program, starting from 1980, has come a long way. Ospreys would remain signature combat aircraft of the US military, till at least, the middle of the present century.

Previous Article
Pan-American Highway: The Longest Road in the World Measuring About 30,000 Kilometres
Next Article
Great Blue Hole: Largest Underwater Sea Hole off the coast of Belize is a Diver’s Paradise